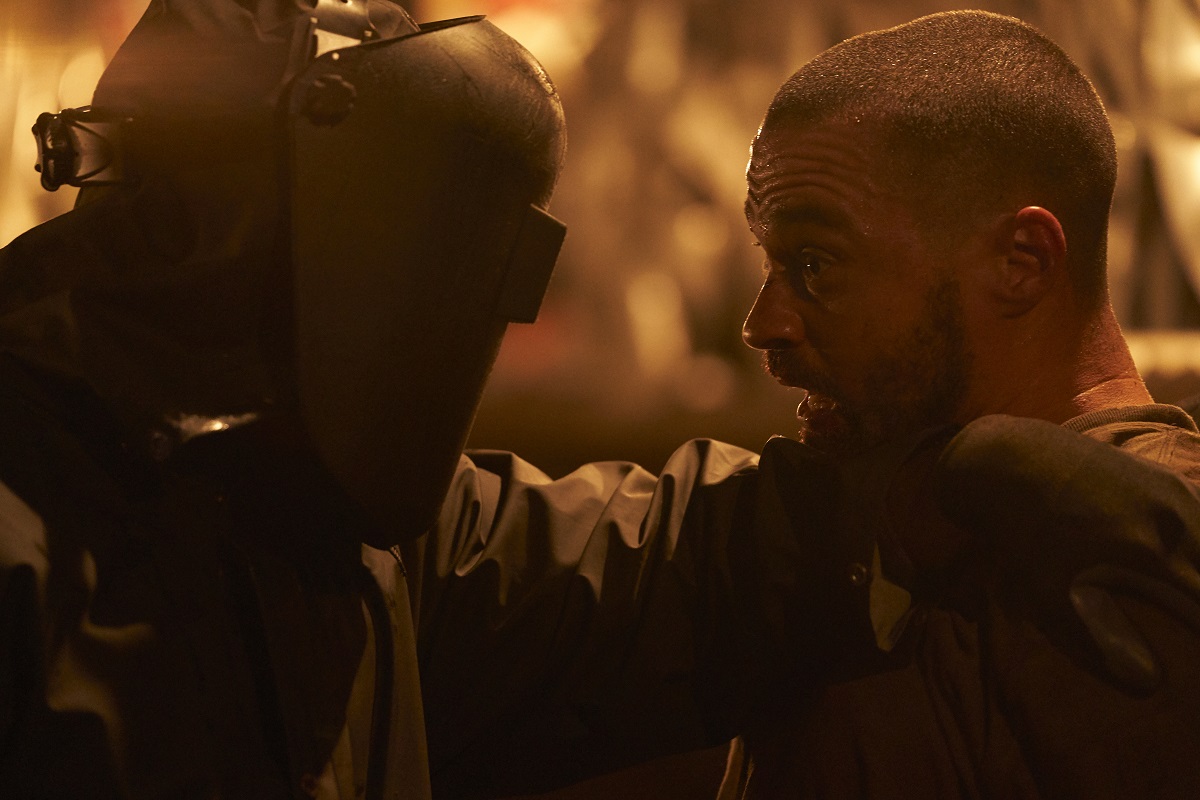 Writer-director Jay Baruchel’s gory and quite glossy slasher film Random Acts of Violence deserves at least some credit for having something on its mind, even if it’s the age-old debate about art inspiring and glamorizing violence. As the creator of the controversial comic Slasherman, Todd (Jesse Williams) has heard it all before, from critics and interviewers and an irate public—namely that his popular character, a big murderous goon with a welding mask and a flexible modus operandi, is sickening. And then the actual killings start, a series of grisly roadside tableaux blatantly modeled on scenes from his comic.

Todd based Slasherman on a real-life unidentified killer who operated along I-90, and he’s accused of glamorizing the man’s violence, giving it a new stage not just with a luridness designed for mass appeal. During a radio interview, Todd scrambles to explain that he really just means “protagonist” when he refers to Slasherman as the “hero,” but there’s a clear sense that he admires the murderer to some degree. He says that these crimes elevated the real killer to the level of myth, and privately he insists that his victims became part of some larger artistic project as a result, like canvases fortunate enough to have met their artist.

Todd’s girlfriend, Kathy (Jordana Brewster), doesn’t share his views, and her own project directly opposes his: a true-crime book that’s not about the killer but about the victims, the ones who matter so little to Todd until they become people he knows personally. The most intriguing parts of the film, which Baruchel and co-writer Jesse Chabot adapted from a 2010 comic of the same name, updating the material to a present day where true-crime podcasts and documentaries are all the rage, are its philosophical questions about horror and our fascination with brutality, made against a backdrop of neon lighting and pulsing synths that consciously recalls so many other entries in the genre. Why, the film wonders aloud, are we drawn to such material, and why do we produce it? But the film seems reticent to elaborate on the questions it raises, losing sight of them entirely in an obvious, overlong plot twist that muddies ideas of an artist’s responsibility and art’s effect on audiences into incoherence.

Random Acts of Violence plays like a cut-rate version of The House That Jack Built, possessing a fraction of that film’s introspection and certainly none of the metatextual playfulness about its potentially hackneyed premise. Lars von Trier obsessively analyzed the metaphorical conceit of an artsy serial killer by showing his dismissive audience, his outright bumbling, and his ambitions as a logical, farcical extreme of separating art from the artist. By comparison, the most that Baruchel’s film can manage is to bookend itself with a word-salad thesis about the pursuit of emotional truth in art, except it neither defines its idea of truth nor grapples with the extreme subjectivity of truth in art. Horror is a genre built out of our most personal fears and urges, our occupations with destruction and pain—how we find truth in things that seem inexplicable or, yes, random to others. But for all of its ostensible thoughtfulness, in trying to describe “real art,” Random Acts of Violence ultimately doesn’t describe anything at all.

Review: Coup 53 Is a Crackerjack Look at a Anglo-American Coup in Iran