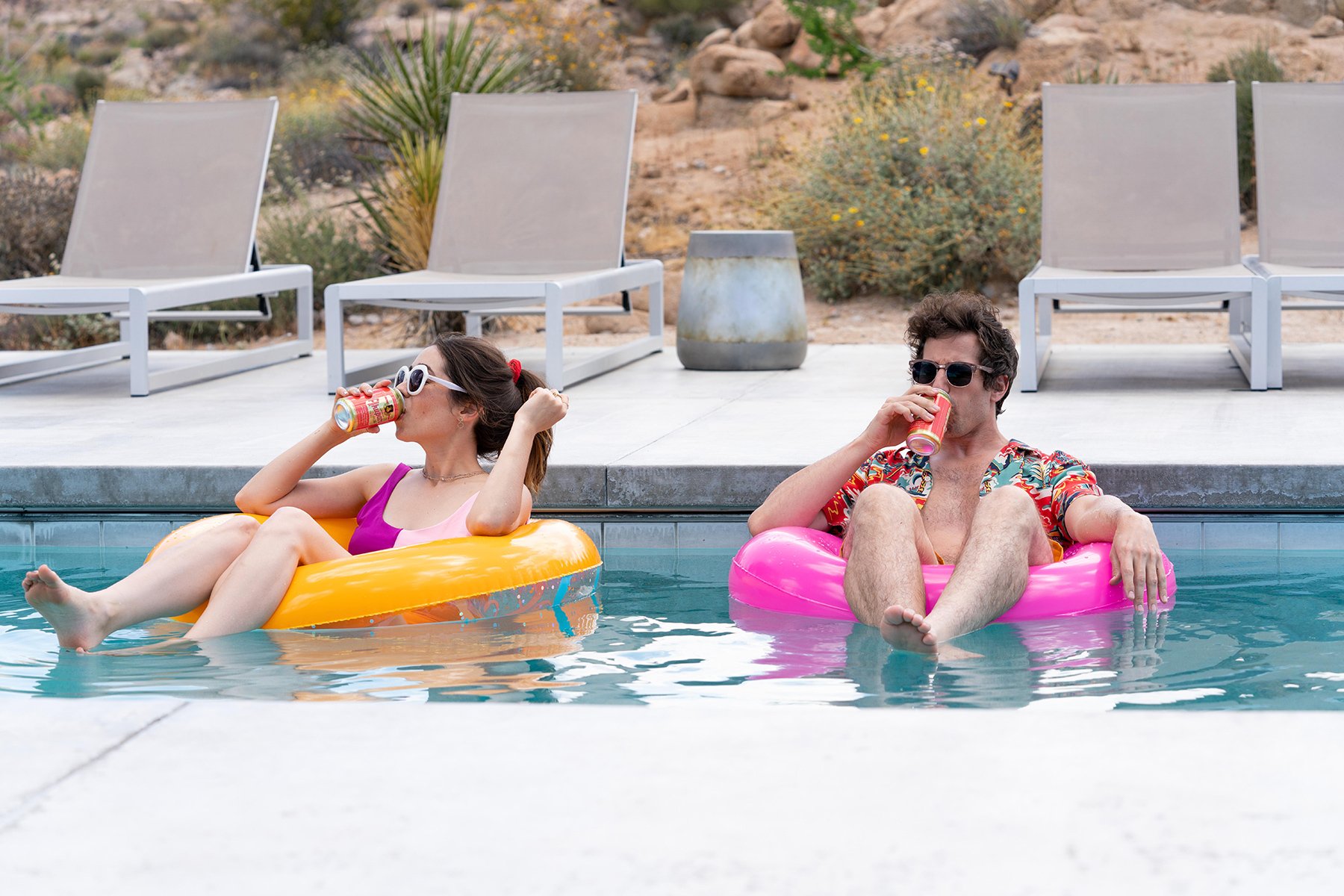 The pitch for Palm Springs likely went: “Edge of Tomorrow meets Groundhog Day but with a cool Coachella rom-com vibe.” All of those components are present and accounted for in Max Barbakow’s film, about two people forced to endure the same day of a Palm Springs wedding over and over again after getting stuck in a time loop. But even though the concept might feel secondhand, the execution is confident, funny, and thoughtful.

Palm Springs starts without much of a hook, sidling into its story with the same lassitude as its protagonist, Nyles (Andy Samberg). First seen having desultory sex with his shallow and always peeved girlfriend, Misty (Meredith Hagner), Nyles spends the rest of the film’s opening stretch wandering around the resort where guests are gathered for the wedding of Misty’s friend, Tala (Camila Mendes), lazing around the pool and drinking a seemingly endless number of beers. “Oh yeah, Misty’s boyfriend” is how most refer to him with casual annoyance, and then he gives a winning wedding speech that one doesn’t expect from a plus-one.

The reason for why everything at the wedding seems so familiar to Nyles, and why that speech is so perfectly delivered, becomes clear after he entices the bride’s sister and maid of honor, Sarah (Cristin Milioti), to follow him out to the desert for a make-out session. In quick succession, Nyles is shot with an arrow by a mysterious figure (J.K. Simmons), Sarah is accidentally sucked into the same glowing vortex that trapped Nyles in his time loop, and she wakes up on the morning of the not-so-great day that she just lived through.

Although Palm Springs eventually digs into the knottier philosophical quandaries of this highly elaborate meet-cute, it takes an appealingly blasé approach to providing answers to the scenario’s curiosities. What initially led Nyles to the mysterious glowing cave in the desert? How has he maintained any semblance of sanity over what appears to be many years of this nightmare existence? How come certain people say “thank you” in Arabic?

This attitude of floating along the sea of life’s mysteries without worry parallels Nyles’s shrugging attitude about the abyss facing them. In response to Sarah’s panicked queries about why they are living the same day on repeat, Nyles throws out a random collection of theories: “one of those infinite time loop situations….purgatory….a glitch in the simulation we’re all in.” His ideas seem half-baked at first. But as time passes, it becomes clear that Nyles has been trapped at the wedding so long that not only has he lost all concept of time or even who he was before it began, his lackadaisical approach to eternity seems more like wisdom.

Darkly cantankerous, Sarah takes a while to come around to that way of thinking. Her version of the Kübler-Ross model starts in anger and shifts to denial (testing the limits of their time-loop trap, she drives home to Texas, only to snap back to morning in Palm Springs when she finally dozes off) before pivoting to acceptance. This segment, where Nyles introduces Sarah to all the people and things he’s found in the nooks and crannies of the world he’s been able to explore in one waking day, plays like a quantum physics rom-com with a video-game-y sense of immortality. After learning the ropes from Nyles (death is no escape, so try to avoid the slow, agonizing deaths), Sarah happily takes part in his Sisyphean games of the drunk and unkillable, ranging from breaking into houses to stealing and crashing a plane.

As places to be trapped for all eternity, this idyll doesn’t seem half bad at first. Barbakow’s fast-paced take on the pleasingly daffy material helps, as does the balancing of Milioti’s angry agita with Samberg’s who-cares recklessness. Eventually the story moves out of endlessly looping stasis into the problem-solution phase, with Sarah deciding she can’t waste away in Palm Springs for eternity. But while the question of whether or not they can escape via Sarah’s device for bridging the multiverse takes over the narrative to some degree, Palm Springs is far more interesting when it ruminates lightly on which puzzle they’re better off solving: pinning their hopes on escape or cracking another beer and figuring out how to be happy in purgatory. Palm Springs isn’t daring by any stretch, but it smuggles some surprisingly bleak existential questioning inside a brightly comedic vehicle that’s similar to Groundhog Day but without that film’s reassuring belief that a day can be lived perfectly rather than simply endured.

Review: We Are Little Zombies Is a Fun, Wildly Stylized Portrait of Grief