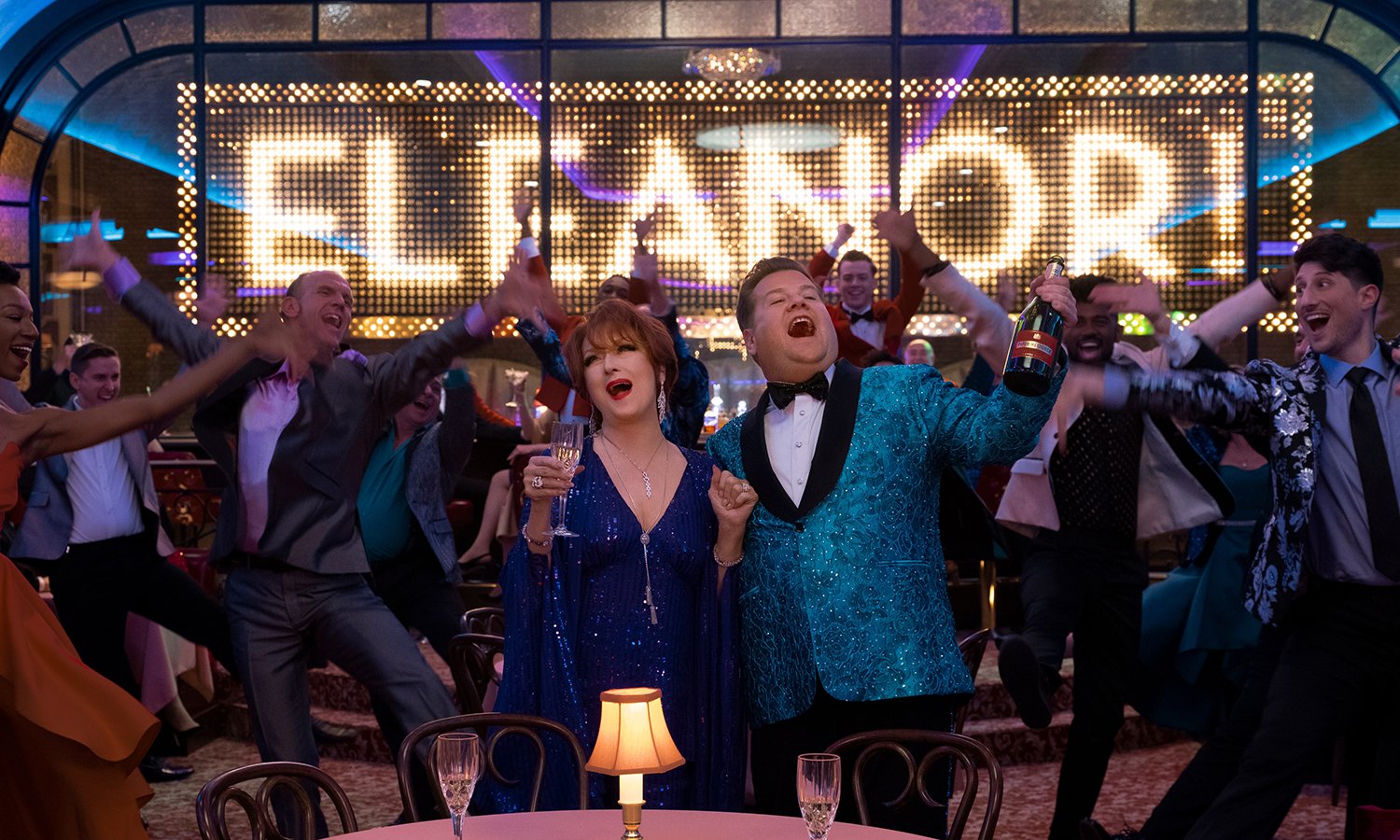 When The Prom opened on Broadway in 2018, it wasn’t quite the dream date it might have been. Despite amassing a small, passionate following and six Tony nods, the musical—which fizzled in trying to fuse a gentle queer teen romance set in rural America with a sardonic, self-referential satire on show business—closed in less than a year.

Now, though, The Prom has found its proper soulmate in Netflix, as Ryan Murphy’s vibrant film adaptation makes a closer-to-seamless whole of the story’s disparate parts, thanks to a cast that smooths over the musical’s roughest edges. There’s still buoyancy in the backflip-saturated choreography of Casey Nicholaw (who directed the Broadway production) and in the often-charming score from Matthew Sklar and Chad Beguelin, but it’s the newly enriched humanity of the show’s most extreme characters—both the Broadway bigwigs and the backwater bigots—that allows The Prom to soar on the screen.

After the disastrous reviews for their lousy Eleanor Roosevelt musical threaten to end their careers, Broadway has-beens Dee Dee Allen (Meryl Streep) and Barry Glickman (James Corden) hatch a desperate plot to recapture the spotlight: They will become celebrity activists. But every celebrity activist needs, as Dee Dee puts it, a “cause célèbre,” and a quick Twitter search directs them to Emma Nolan (Jo Ellen Pellman), a teen from Edgewater, Indiana, where the high school PTA has canceled prom to prevent Emma from attending with her girlfriend. Off Dee Dee and Barry go, along with showgirl Angie (Nicole Kidman), Juilliard-educated bartender Trent (Andrew Rannells), and a bus filled with the non-equity touring cast of Godspell, to take a stand against Edgewater’s ignorant Hoosiers and, if all goes well, go viral.

On stage, The Prom never quite managed to meld the over-the-top self-worship of the Broadway invaders with the small-town sweetness of Emma’s romance with closeted Alyssa (Ariana DeBose), daughter of PTA chair and local homophobe-in-chief Mrs. Greene (Kerry Washington). As in the stage production, the richest moments are those shared between Emma and Alyssa; here, DeBose sounds especially spectacular, and Murphy sets up the loveliest song, “Dance with You,” in a tender swirl of cherry blossoms.

About halfway through, the film starts to commit the same sin as the showboating, self-involved quartet of Broadway divas by sidelining Emma, forgetting why we came to Edgewater in the first place. But while this detour largely sank the stage show, drowning the sincerity of Emma’s storyline in loud hamminess, two smart choices pull the film back from the brink. One is the deepening of Barry’s backstory: Like Emma, Barry knows what it’s like to come out to an unaccepting family, and the film adds a moving reunion with his mother (Tracey Ullman). When Barry celebrates the opportunity to finally go to prom, a rite of passage robbed from him in adolescence, Murphy shows Barry dancing triumphantly with his younger self. The visual flexibility of filmic storytelling elevates musical moments like these—and, in this case, takes the focus off Corden’s performance, which is often hampered by a shoddy American accent.

The even wiser move is casting Streep, who, even when Dee Dee is at her most vain, conveys the plausible performativeness of a woman who cloaks her imposter syndrome and fear of betrayal behind bombast that prevents anyone from getting too close. So when Emma learns that she can affect change in Indiana all on her own, the Broadway gang’s vainglorious sojourn doesn’t feel like it’s been a waste of their time or ours. Streep undergirds Dee Dee’s shift toward altruistic action, absurdly outsized as the character may be, with an awareness of her underlying fragility, as she grows stronger and more vulnerable by meeting Emma and a principal (Keegan-Michael Key) who holds Dee Dee accountable for her selfishness.

Less plausible is the en masse about-face of Emma’s intolerant classmates, but on the individual level, Washington’s taut take on a mother torn between her love for her daughter and her entrenched beliefs is less a portrait of radical transformation than a carefully calibrated redefinition of what it means to care for a child. Though her part is small, Washington packs paragraphs of meaning into each worried glance or slowly softening glare. It turns out what this big Broadway musical needed most of all was the precision of a close-up.

Review: Steven Soderbergh’s Let Them All Talk Is an Exhilarating Comedy of Regret

Review: Kill It and Leave This Town Vividly Marries the Mundane and the Dreamlike