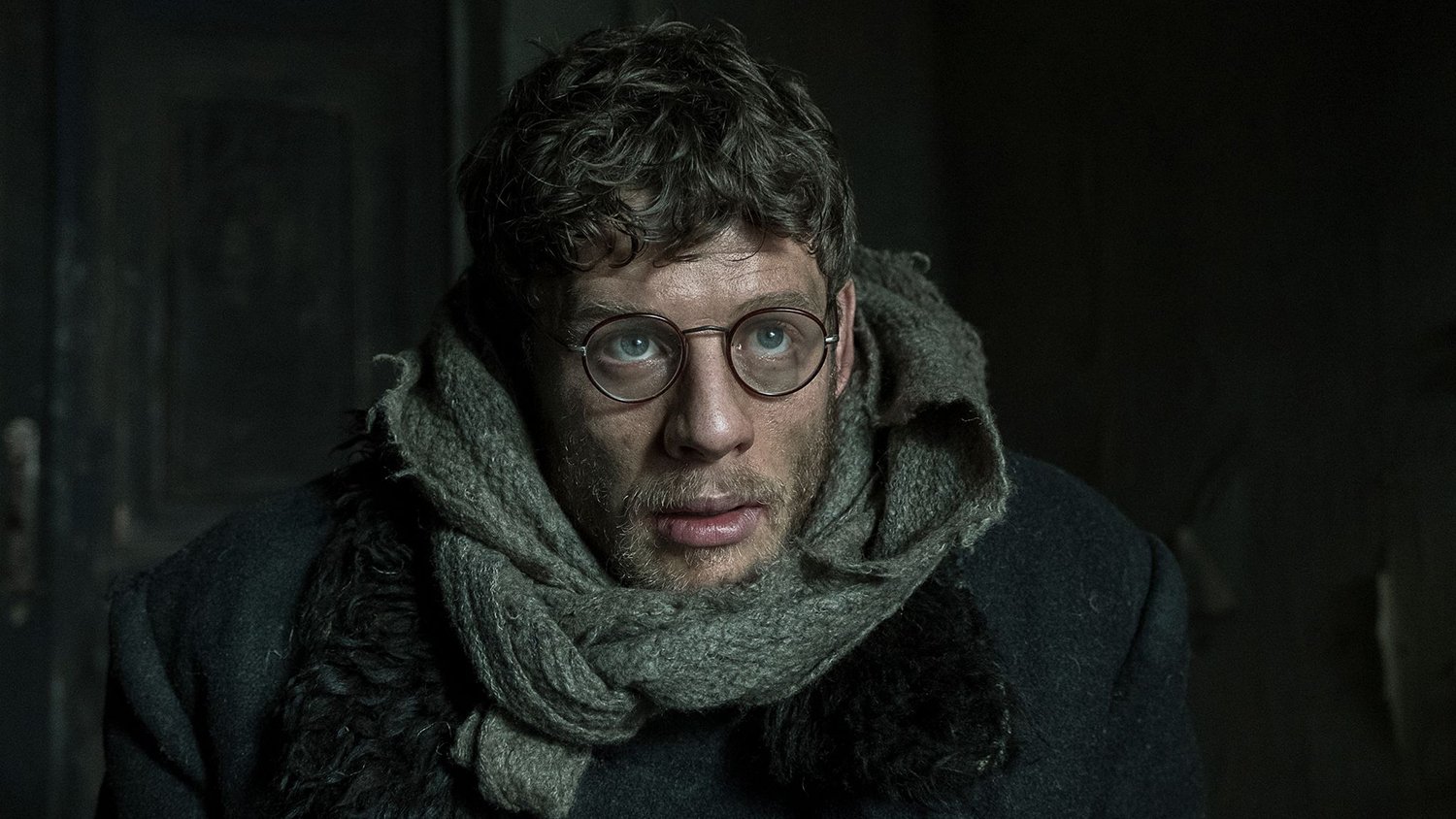 Grim portents of the future abound in Mr. Jones, director Agnieszka Holland’s richly textured and deeply moving film about Welsh journalist and foreign-relations expert Gareth Jones (James Norton) unearthing the truth of the Ukrainian genocide of the early 1930s. Holland doesn’t need to do much to evoke the more well-known Eastern European tragedies that followed Stalin’s manmade famine known as the Holodomor, but the story also reverberates with our current moment. An early scene set in March of 1933 sees Jones attempting to convince former Prime Minister David Lloyd George (Kenneth Cranham) and other assembled members of the British old guard of the imminence of World War II. One of the men dismisses his warning with a complacent pronouncement that echoes across the historical chasm separating us from the Great Depression: “Hitler will soon learn that there’s a great deal of difference between holding a rally and running a country.”

Mr. Jones frames its story of a man acutely conscious of the gravity of his historical moment in relation to the words of one of the 20th century’s great moralists. The film opens with and periodically returns to George Orwell (Joseph Mawle), whom Jones will later meet, at his typewriter in the English countryside, writing Animal Farm. Events in Jones’s trek through the benighted and impoverished Soviet Union suggest the historical bases for Orwell’s famous observations about the nature of totalitarian control (one of the film’s characters sardonically refers to the OGPU agent tailing her as “big brother”). At times, this frame narrative threatens to feel like over-intellectualized baggage, on the verge of undermining Holland’s intent to make visible the forgotten suffering of the Ukrainian people. But ultimately, the message here isn’t that the truth of their misfortunes is somehow legitimized by Orwell’s encoding of the tragedy of the Soviet Union’s false promise into popular myth; it’s that the under-reported Holodomor, which caused the deaths of millions of Ukrainians between 1932 and 1933, is already present as repressed content in the narrative of the 20th century.

Arriving in Moscow to attempt to secure an interview with Stalin regarding the provenance of the Soviets’ ongoing economic success, the intelligent but in many ways naïve Jones begins picking up on signs of a conspiracy. Journalists are confined to Moscow “for their own protection”; his week-long visa has been abruptly shortened to two days; his contact, the journalist Paul Kleb (Marcin Czarnik), has been murdered in an alleged robbery outside the ritzy Hotel Metropol; Walter Duranty (Peter Saarsgard), the Pulitzer Prize-winning correspondent and Moscow Bureau Chief for the New York Times, and his favored underling, Ada Brooks (Vanessa Kirby), deflect his questions about Kleb and the U.S.S.R.’s mysterious wealth, which, it will turn out, has been secured by stealing grain from Ukraine.

The Moscow scenes are filmed in extremely tight shots that convey the increasing paranoia and constriction of Stalinist Russian society. Holland complements her cramped mise-en-scène with a focus on the omnipresent tools of disciplinary power: the importance of documents of identity and passage, the manipulation of information through newspapers and correspondence, and the monitoring of civilian discourse through telephone surveillance. A visual reference to a famous moment from her countryman Krzysztof Kieślowski’s Red—a speeding tracking shot following a bundle of multicolored telephone lines connecting Western and Eastern Europe—brings his more metaphysical concerns about interpersonal connection down to earth, to the problem of authoritarian control through the media.

While we know to expect such things from Stalin’s Russia (and the film cues us to anticipate them), the dire situation in the country isn’t so evident to Jones or his contemporaries. Played with a charming air of prim British decency by Norton, the youthful Jones has a bit of the provincial Welsh coast about him, despite his evident worldliness; while traveling, he idly plucks at a mouth harp, a twangy instrument that evokes the simplicity of rural life. His decision to venture into Ukraine to discover the truth around Stalin’s grain theft comes from a mix of worldly fearlessness and the idealistic recklessness. “I don’t have an agenda, unless you call truth an agenda,” he avers to the leftist ideologue Brooks soon before he departs—a line whose grandiosity proves to be equal to the stakes he’s facing.

In contrast to the claustrophobic scenes in Moscow, the portion of the film set in Ukraine consists of vast, empty vistas of barren land stifled by snow. The starving, terrorized citizens of Eastern Ukrainian villages have sunken into their landscape: hunched figures in dark coats blend in with the pitch-black trees of the wintry forests; the gray skin of malnourished children makes them of a piece with their rotting wood-and-plaster homes. Holland captures the disorienting moral chaos of these visions through manic cinematic effects like fast motion, rapid montage, and motion blur; a particularly well-composed sequence depicting one of Jones’s train rides looks like something out of a 1920s city symphony and even includes images of industrial workers that evoke the style of Dziga Vertov’s Man with a Movie Camera.

With such stylizations, Holland isn’t diminishing the reality of the horrors Jones uncovers. Rather, these formal tricks, taken from the toolbox of the early avant-garde film movements, remind us that the progress such flights of mechanical fancy were meant to signify was fueled by the liquidation of millions of human lives—that mass murder is as modern as Soviet montage. Mr. Jones is an unnervingly beautiful tribute to those lives, and to the people who have seen the world for what it is, instead of the dream of it they’re instructed to believe.

Review: Picture of His Life Testifies to a Photographer’s Compassion for Nature