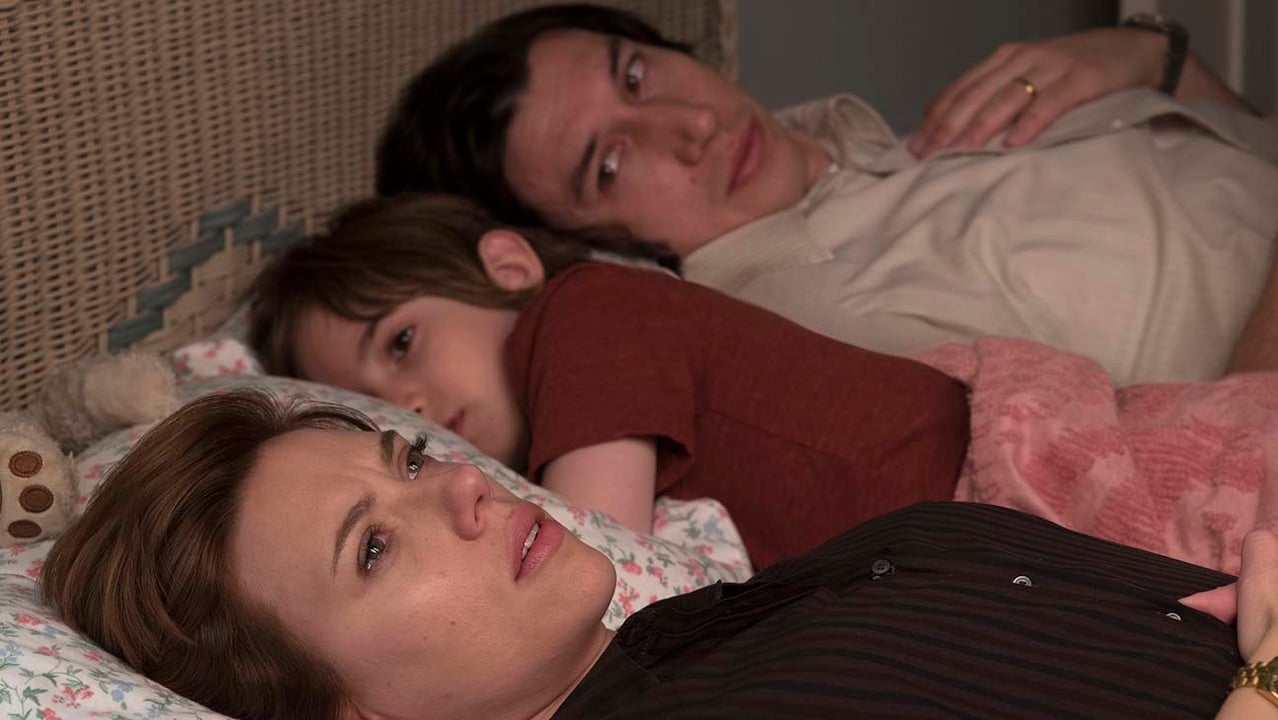 Noah Baumbach’s Marriage Story initially occupies a nebulous spot between broad-strokes comedy and raw melodrama. For one, its depiction of the challenges of a couple’s divorce makes plenty of room for inside jokes about the art world and its oddball denizens. But as the initially amicable split between an acclaimed New York playwright, Charlie Barber (Adam Driver), and his actress wife, Nicole (Scarlett Johansson), takes a sour turn, the film becomes more acerbic, fixating on how familiarity breeds contempt. At one point, we catch a glimpse of an old magazine profile about the couple—written at the height of their artistic collaboration and domestic bliss—titled “Scenes from a Marriage,” a throwaway allusion to Ingmar Bergman that’s also a winking promise of the fall to come.

At first looking to handle their divorce without the involvement of lawyers, Charlie and Nicole hit a rough patch when the latter, who gave up a Hollywood career to move to New York and act in Charlie’s avant-garde plays, heads back to Los Angeles to shoot a television pilot, taking with her the couple’s young son, Henry (Azhy Robertson). While in town, the various divorcées on set encourage Nicole to lawyer up, and she takes a meeting with divorce attorney Nora Fanshaw (Laura Dern), a yuppie whose breezy chattiness can turn on a dime to cold-blooded strategic talk over how to win a court battle that Nicole doesn’t even want to be a part of.

Nicole, so passive at the start of her meeting with Nora, is initially marginalized within the frame by cinematographer Robbie Ryan’s camera, isolated in a corner of the room in angled compositions that make her look smaller than she really is. But as she begins to talk about her relationship, Nicole almost subconsciously begins to assert herself, getting up and walking around Nora’s office like she owns the place. Gradually, Marriage Story reorients the camera around Nicole, pushing closer until she dominates the frame. In an instant, you can sense that her meekness has been replaced by outrage at Charlie’s accumulated microaggressions.

Abruptly, an ostensibly pain-free divorce turns ugly, with Nicole serving a bewildered and hurt Charlie with legal papers. As Johansson plays up Nicole’s increasingly steely resolve against Charlie, Driver emphasizes Charlie’s bafflement as he’s forced to keep flying between New York and L.A. to meet with what few attorneys in town Nicole didn’t consult with first, thus limiting his options. As Henry grows more literally and emotionally distant from his father, Charlie is set adrift, haplessly attempting to retain his child’s love and keep his cool with Nicole.

At first, the film’s portrait of Charlie’s shortcomings, of the way he directs everyone in his life as if they were starring in one of his plays, is almost forgiving. Indeed, Charlie is so mild-mannered that Nicole’s vindictive behavior toward him comes to feel monstrous in its overreaction. But just as Baumbach’s understanding of Nicole starts to verge on the misogynistic, the film abruptly course-corrects, shedding light onto how much of Charlie’s ostensibly kind nature is a mask for a deliberately controlling, narcissistic personality. And in a handful of scenes, Marriage Story homes in on just how perceptive Nicole was of his manipulations, forcing us to reconsider the justifiability of her rage against her husband.

Baumbach executes this sudden clarification of Charlie’s true self with incisive aplomb, and in no small part with the help of Driver’s emotionally charged pivot toward manifesting the depths of Charlie’s toxic entitlement. Nicole’s unyielding resolve to open Charlie’s eyes to his worst flaws culminates in a furious argument between the two in which Driver rips the mask off of Charlie’s ostensible patience and good-faith attempts at an amicable split. The more heated the two get, the deeper they reach into their arsenal of repressed grievances to craft more savage criticisms of the other’s failings. Baumbach uses arrhythmic shot-reverse-shot patterns throughout the film to stress the latent tension in Charlie and Nicole’s interactions, but here each cut adds an element of danger, following the rapid escalation of fury between the frayed couple to the point that one expects violence at any second.

As dark as it gets, Marriage Story regularly offsets its tension with comic relief, particularly in a strong set of supporting performances. Alan Alda shines as Charlie’s genteel divorce attorney, Bert Spitz, who reassures his client that they won’t go all the way to court but must act as if they are, which, in a twisted bit of legal logic worthy of Joseph Heller, only makes a court battle all the more likely. And when a court-appointed social worker, Nancy Katz (Martha Kelly), comes to evaluate Charlie’s behavior around Henry, she exudes a stiff politeness, somehow both quizzical and clinically disinterested. This makes for erratic rhythms in conversation that, as a befuddled Charlie attempts to pass Nancy’s inspection, cast the woman as both straight man and foil. “Do you ever observe married couples,” Charlie asks at one point, desperate to fill the frequent silence left by Nancy’s visit. “No,” she responds, the confusion in her voice her first outward display of emotion. “Why would I?”

But the film’s prevailing mood is one of flailing anger and pain. Even at its most blistering, though, Marriage Story contains small moments of grace in which Nicole and Charlie reflexively help or comfort each other. These subtle glimpses of their lingering affection for one another and familiarity complicate the bitterness of their separation. Elie Wiesel once said, “The opposite of love is not hate, it’s indifference,” and only two people who were once as deeply in love as Nicole and Charlie were could have spent so long observing every minute detail of their partner to become so obsessed with each other’s flaws in the first place.

Review: Oh Mercy! Is a Bracing Study of Violence Born of Helplessness