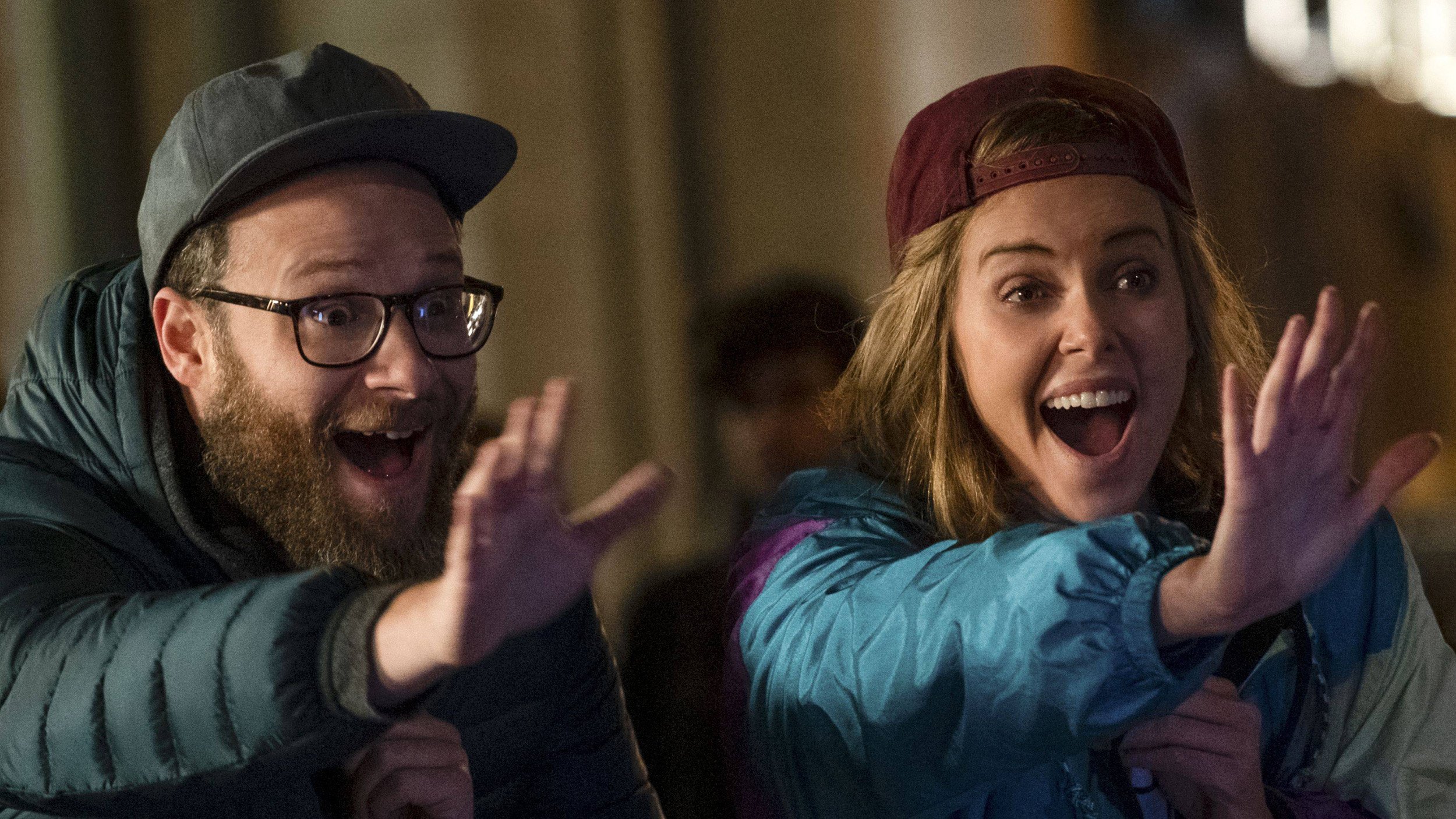 Jonathan Levine’s Long Shot doesn’t so much upend the gendered presumptions of so many bromantic comedies from the aughts as jumble them around a bit. In Fred Flarsky, Seth Rogen plays an underachieving stoner who attracts a woman more than a few rungs above him in social standing and looks. In the latter role is Charlize Theron as the stunning, elegant, and indefatigable Charlotte Field (Charlize Theron), America’s secretary of state, who surprises everyone by falling in love with a schlub like Flarsky. But instead of presenting the coupling as a miracle that befalls our hero, Long Shot actually develops and convincingly motivates Field’s interest in Flarsky, so that the attraction feels both reciprocal and believable—at least, within the confines of the film’s Apatowian mix of dick jokes and sentimentality.

As such, Long Shot is neither a pure example of the phallocentric rom-com, nor quite the woke, #MeToo-era film it seems to think it is. Squint hard enough and you might confuse it for Knocked Up. Flarsky only has one friend here, start-up executive Lance (O’Shea Jackson Jr.), but he still serves the same structural role as Rogen’s crew of buddies from Judd Apatow’s 2007 film, present to provide outlandish one-liners until he’s called upon in a crucial moment to deliver sage advice. Like Katherine Heigl’s character in Knocked Up, Field has a clique that warns her away from Flarsky, but here it’s staff members Maggie (June Diane Raphael) and Tom (Ravi Patel), who aren’t just trying to preserve her social status, but save her chances at becoming the first female president of the United States.

Flarsky is a crusading journalist whose lefty, Brooklyn-based news site is purchased by Parker Wembley (Andy Serkis), a media mogul with Steve Bannon’s face and Roger Ailes’s handsiness. Flarsky quits in protest, and Lance offers solace in the form of getting wasted at a World Wildlife Fund event. (“Fuck the animals, they’re already gone,” Flarsky initially protests, a throwaway line that’s funny in the moment but chilling in retrospect, evidencing that apocalypse humor has become both mainstream and flippant.) Lance’s hook is that Boyz II Men will be performing at a throwback dance party he knows his fellow elder millennial can’t resist, and it’s during “Motownphilly” that Flarsky catches Field’s eye on the dance floor.

As it happens, the two grew up next door to each other, and Field used to babysit Flarsky, back in the early ‘90s when harmonic R&B and Flarsky’s trademark teal windbreaker were still in fashion. United by their fondly remembered past and their mutual hatred of Wembley, the two reconnect, with Field hiring the freshly unemployed Flarsky to punch up her stump speeches. Field is developing a comprehensive environmental treaty, which she plans to use as a platform from which to launch her presidential campaign, having recently learned that her boss, President Chambers (Bob Odenkirk), the dim-witted TV star who’s running the country in the film’s barely refracted reality, won’t be running for re-election.

The extent to which the film makes a Rogen/Theron romance work is almost as surprising as the Flarsky/Field relationship is to the characters in the film. It’s not so much that the actors have immediately apparent chemistry, but that the script gives each of them enough depth that their attraction to the other feels organic. Aiding in this regard is Alexander Skarsgård as Canadian Prime Minister James Stewart, a Justin Trudeau caricature who functions as a foil to Rogen’s intelligent and committed lefty; sexy but daft, vaguely liberal but deeply compromised, Stewart flirts with Field because it bumps their respective poll numbers up. Theron also gives a versatile performance, and despite Field’s serious-mindedness, she isn’t shoehorned into constantly playing straight (wo)man to Rogen’s antics, particularly in the couple’s familiar-feeling, but nevertheless amusing, drug-fueled romp in Parisian night clubs.

Through the unlikely coupling of Flarsky and Field, the film stages a fantasy reconciliation between the left and centrist wings of the Democratic Party, with Flarsky cast as the stubborn ideologue and Field as the essentially noble politician so focused on her career that she’s willing to let go of some of her convictions. For all its attunement to current political discourse, however, Long Shot’s satire is by and large superficial, more on the order of clever references than incisive observations. The film’s nods to the multifold crises of American democracy have essentially the same status as its references to Encino Man and Pretty Woman, provoking laughs of recognition rather than delivering cutting takedowns. Intermittent clips from Wellby’s Fox and Friends-style political commentary show, featuring an underutilized Claudia O’Doherty as the sole woman beset on all sides by her co-hosts’ adolescent misogyny, are both too obvious and too close to the real thing to elicit deep laughs.

The film’s satirical perspective is further muddled by a late-film scramble not to alienate every Republican viewer—and by some conspicuous “borrowing” from a decidedly sharper media property about a powerful, Hillary-esque politician. Tom, Field’s bag man, and Maggie, her prospective campaign manager, are watered-down versions of their counterparts on HBO’s acerbic Veep. (Long Shot even cribs a joke from that show’s first season involving diarrhea and a limousine, and nabs recurring Veep guest star Randall Park for a brief cameo.)

The film dials up Veep’s already exaggerated carnival of political snafus an additional notch, and while Long Shot is often funny, it’s never sharp. By the end, the bounds of what’s politically possible have been stretched so thin that the film enters the realm of pure fantasy. As it proceeds toward its telegraphed rom-com ending, Long Shot becomes, like Field’s compromised environmental initiative, just more empty rhetoric, an ineffectual reiteration.

Review: Knock Down the House Is a Victory Lap for Alexandria Ocasio-Cortez