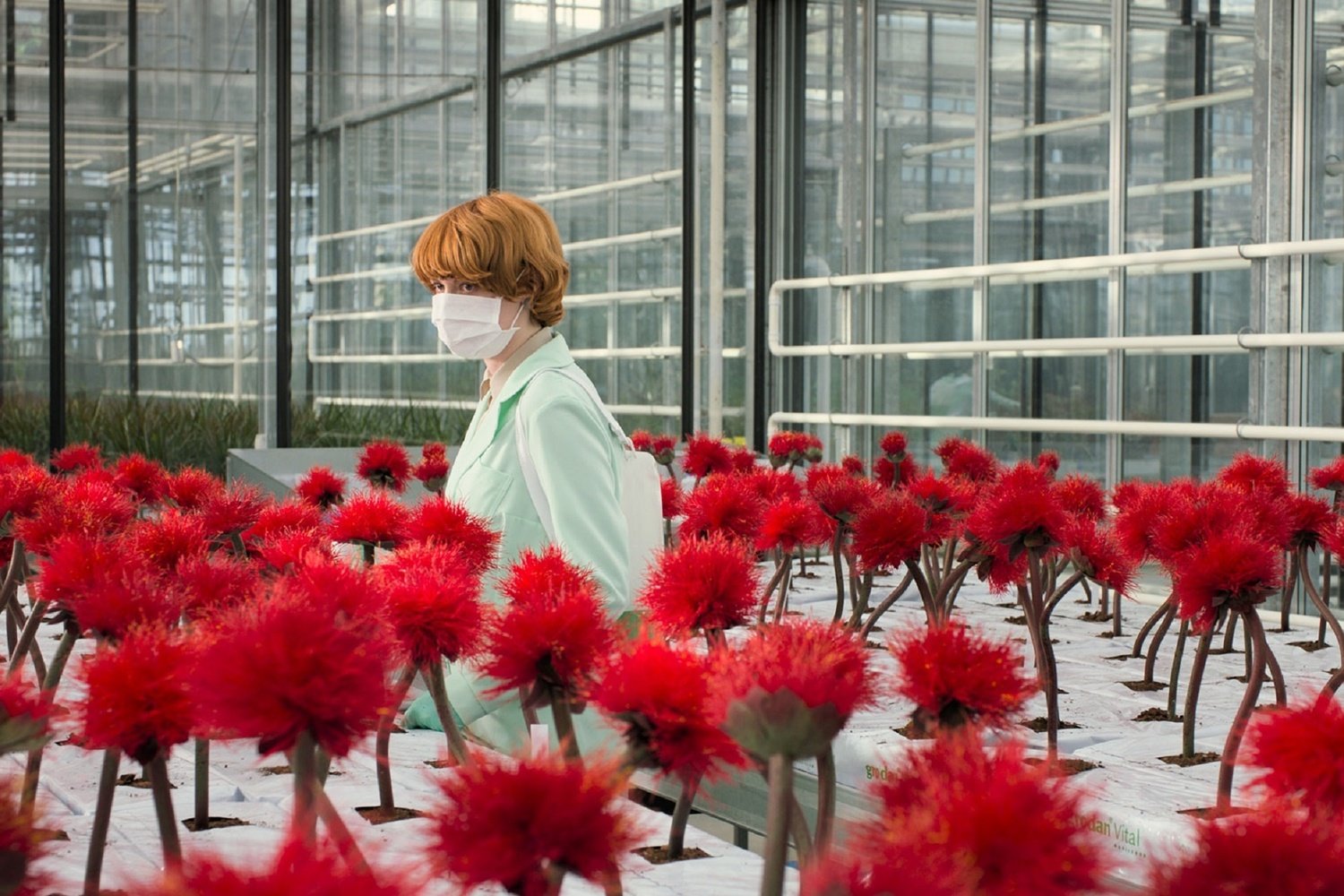 With Little Joe, Jessica Hausner confidently expresses a thorny and disturbing theme, though perhaps with too much confidence, as the film sometimes suggests less a drama than a persuasively argued thesis. As in Amour Fou, the filmmaker is concerned with how society governs people with mores that are communicated so early and consistently in their lives as to seem subliminal. In contemporary society, we’re conditioned to accept a ritualized alteration of work and home life that can numb us to individual desires or even render them imperceptible. In Little Joe, this numbing process is sped up with a chilling inciting incident: the invention of a flower that’s either a gift or a curse.

The flower is one of the film’s aesthetic triumphs. Bred by Alice (Emily Beecham) in a sprawling corporate laboratory, the plant resembles a phallic rose, with an especially lurid red-purplish hue that suggests a delicate piece of lingerie. Which is to say that the flower is visually coded as male and female, embodying sex incarnate. Not once does this flower look “real,” which is intentional on Hausner’s part, as it stands alien and apart from the humans who preside over it. This alienness is intensified by the soundtrack, which recalls Japanese wind instruments, provoking the question: Why a Japanese motif in a British corporate setting? Hausner grooves on such formal incongruities, inspiring a discomfort that aligns the audience empathetically with a handful of increasingly stricken characters.

Hausner doles out exposition carefully, prioritizing mood over plot. Alice invented the plant, which she names Little Joe after her teenage son, Joe (Kit Connor), for the purpose of making consumers happy. Smell the flower, talk to it, befriend it, and it will inspire in you a quiet tranquility. Every detail in Hausner and Géraldine Bajéard’s screenplay is purposeful. For instance, Alice’s naming of the flower is ironic and heartbreaking, understood as a guilt-ridden, fake-intimate gesture toward the son she only occasionally sees, and to whom she feeds take-out. As deliberate as Hausner is in setting up her nesting subtexts, she rarely overplays her hand. Joe and Alice aren’t estranged as they might be in a narrative that simplistically castigates Alice for her ambition; rather, they have an ambiguous relationship that oscillates between mutual humoring and quiet embitterment. (Joe, on the cusp of adolescence, partially revels in the freedom a distracted mother can grant.)

Given that Little Joe is a kind of horror parable, there are drawbacks to Alice’s alluring, experimental flower. A sexy flower that’s been perversely denied the ability to procreate, so that the lab can control the copyright, Little Joe takes matters into its own hands. Its pollen inspires less happiness than a painless devotion and resolution, as a job or a stagnant marriage might. This devotion turns people into believers of the flower, who will do anything to protect and continue breeding it. And so Hausner has created a modern gloss on Invasion of the Body Snatchers, except she’s set herself a resonant challenge: Under the sway of the flower, the filmmaker’s characters are barely different than they were when at the behest of their usual obligations. Work seems to have already trampled everyone’s personality, nulling their sex drives in the way they had attempted to stifle Little Joe’s.

In this light, Hausner reveals that most versions of Invasion of the Body Snatchers, while bleak, are flattering for assuming that we have individualities to suppress. Hausner’s gorgeous, rigid tableaux and surveillance camera-like tracking shots equate humans to drones in an ant farm, though there are also desperate implications of submerged passion in the actors’ performances and the film’s set design. The whites of the laboratory are offset with the bright colors of shoes, shirts, and chairs, recalling the fussiness of Wes Anderson’s films.

For Hausner, though, the symmetrical blocking and precise costuming serve a different purpose. Anderson’s characters are actualized by their settings and wardrobes, while Hausner’s characters appear to be making unanswered pleas. Even the desserts in the lab’s cafeteria are ornate, flamboyantly colored, and somehow teasingly sexual. But Little Joe, expelling its pollen in a manner that suggests ejaculation, refuses to be kowtowed by the disconnected, euphemistic ethos of the 21st century.

Hausner fashions a tragedy in which a society’s loss of self has been suffered long before the narrative opens, and the risk of such a conceit is one of hopeless repetition, and of lifelessness, whether intended or not. Giving Little Joe its force is Hausner’s own empathetic connection to Alice, which parallels Alice’s love for her flower. Beecham gives a performance of magnificent implication, suggesting the yearning that Alice is too insular and fearful to answer. This is an intensely female film, driven by a terror that’s nurtured by sexism. Male workaholics are often troubled geniuses in pop culture, while women are rendered fraught and brittle. Hausner seemingly resents this double standard while also buying into it, and this war between intellect and emotion imbues Little Joe with neurotic power. Little Joe eases the annihilation of personality while evening the playing field for the genders, allowing women to pursue their obsessions without guilt or recrimination. In one manner, Alice’s little monster sets her free.

Review: When Lambs Become Lions Is a Stylish Look at Elephant Poaching

Review: 1917 Is at Its Best When It Embraces the Chaos of War