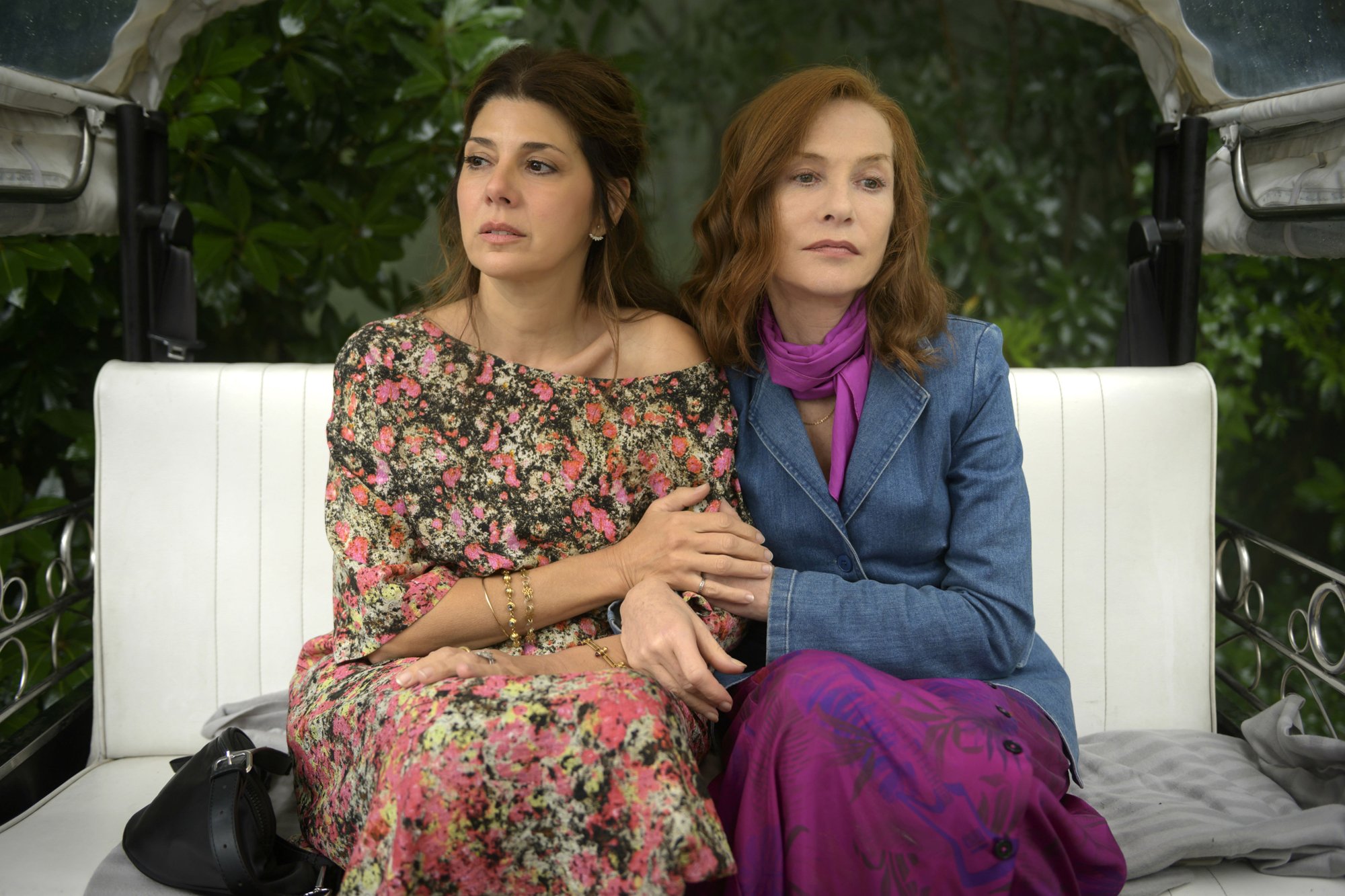 Unexpected rainfall. Aimless wandering in oak woodlands. The loss of an expensive bracelet. Strangers on a train headed to the beach. It’s ultimately these tangential moments, and them alone, that lead to something other than heartbreak in Ira Sachs’s Frankie. This despite the greatest efforts made by the eponymous character (Isabelle Huppert), a terminally ill actress with a sharp tongue and a magnetic personality, to carry out her death in the same controlled, self-serving fashion with which she’s lived her life up to this point.

Frankie brings her reconstituted family together in Sintra, Portugal, planning to code the future while she can still have a say in how those who are supposed to love her lead their lives. The trip is largely an excuse for Frankie to play cupid to her only son, Paul (Jérémie Renier), who’s about to move to New York City, and her friend and hairdresser, Irene (Marisa Tomei), who’s unfortunately about to leave it—and who pre-emptively botches the whole thing by bringing her suffocating cameraman boyfriend, Gary (Greg Kinnear), to Portugal.

Frankie is a film about spoiled, or spoiling, encounters, and the ways in which so many fundamental encounters are actual mis-encounters, or non-consensual confrontations. From the most consequential of them all—death’s ill-timed knocking—to the most ordinary disaccords between lovers seemingly intent on proving that non-reciprocal love is the only kind of love there is. Here, love is precisely a question of dissonance: Irene doesn’t love Gary enough; Frankie’s stepdaughter, Sylvia (Vinette Robinson), doesn’t love her husband anymore; Jimmy (Brendan Gleeson), Frankie’s husband, loves a woman who’s almost no longer there; and Michel (Pascal Greggory), Frankie’s first husband, loved men but married a woman. Even self-love, and Frankie has plenty of it, is ultimately severed by the finitude of all things.

In the film’s most moving scene, Frankie is essentially coerced to join the 88th birthday celebration of one of her fans, who recognizes her one day at a park. The woman couldn’t think of a better gift than to have her favorite star by her side—to help her blow out the candles on her birthday cake. But Frankie is incapable of faking the acceptance of the elderly woman’s love, and so she raises her glass listlessly for a toast, her face frozen between mourning and refusing to mourn the fact that she will never make it to 88, or even to the new year.

Frankie’s attempt to control her narrative, or the post-mortem plot of her legacy, is a way of disavowing love’s ineptitude to save even the most adulated of bodies from vanishing, like it never breathed, until the very end. It’s a last-ditch effort to remedy that most unjust of existential truths, akin to the dead son’s epistolary request in Guillaume Nicloux’s Valley of Love. In Nicloux’s film, the son’s desire to re-enact his parents’ meeting takes Huppert and Gérard Depardieu’s characters not to the medieval castles and romantic gardens of Sintra, but to the rugged terrain of California’s Death Valley. Right before taking his life, the son writes letters to each parent which are more like scripts, or maps, promising a treasure in the end—some kind of death-defying sign meant as evidence for death’s blind spots. Here, too, the dead, if not the dying, use the desperate naïveté of the living like playthings, unsettled by the mortality of the Other precisely because it reminds them of their own.

But Frankie also shares with Valley of Love the status of being too small of a film to fit Huppert’s greatness. Each time she appears, we’re reminded that every other element of the mise-en-scène or the narrative doesn’t matter. The insufficiency of language to do justice to Huppert’s magnitude recalls Meryl Streep’s presence in John Wells’s August: Osage County, another film about the family unit as a conglomeration of unaddressed dysfunctions, and whose superb acting consistently exposes the banality of everything else around it.

Only Marisa Tomei’s face can compete with Huppert’s ability to turn even the sappiest of scenarios into a nuanced tour de force, and the hokiest melodrama into purposeful camp. Sachs’s film is composed of a series of vignettes that feel awkwardly staged, especially when Huppert or Tomei aren’t on screen. The fact that many of the actors don’t speak in their mother tongue for a lot of the scenes only highlights the gracelessness of the dialogue. Frankie is full of instances of characters over-explaining themselves (from “I’m from Porto, a few hours to the north” to “We are a very Catholic country”), whereas Huppert and Tomei’s faces testify, precisely, to the futility of words in the face of all meaningful things.

In the film’s final sequence, it isn’t even Huppert’s face that steals the show. She manages to do it with her back. The camera tracks her walking up a mountaintop where all of Frankie’s guests are supposed to congregate at the woman’s request. It’s a strange scene, as Sachs overstuffs it with overtly manipulative elements that compete with Huppert’s regal presence. There’s a painterly landscape, classical piano notes, death, cancer, metastasis, and friendship, but all we really need is Huppert. There’s so much certainty in her gait, so much self-assurance, if not peace, in the way her head sits on her neck with a sense of dignity, in how she looks down at the not-yet-dying (to the extent that one ever isn’t) with respectful detachment and hard-earned closure. The mountain is Frankie’s, and so is the whole Earth, it seems. Death will take her, she must admit, but the Earth is all hers in the meantime.

13 Obscure and Underrated Horror Movies to Watch This Halloween