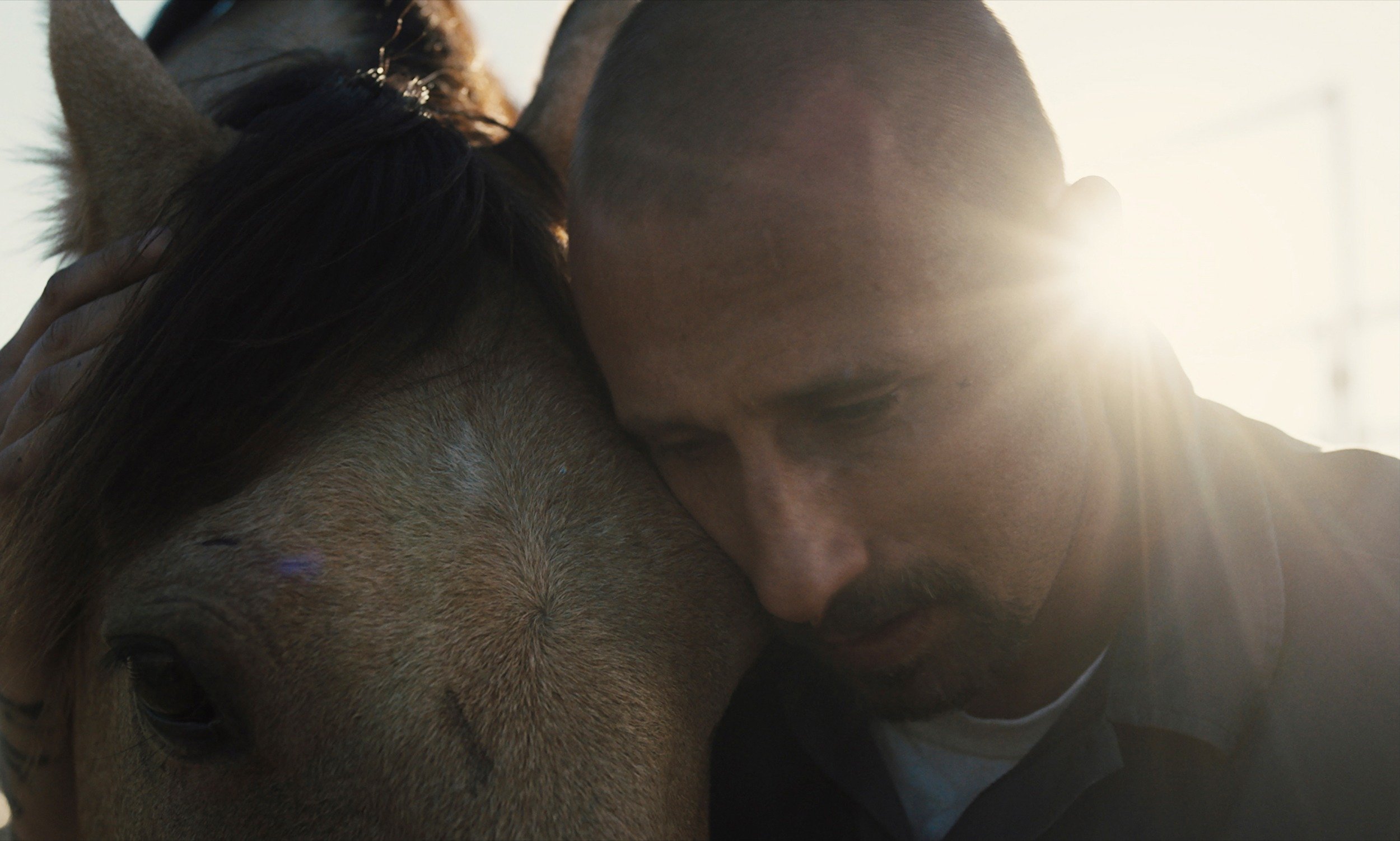 Single-minded and direct in its execution, Laure de Clermont-Tonnerre’s The Mustang is a hard look at the extremes of masculine guilt and healing. The film opens on wild horses running freely through the vast American West. They’re soon captured and transported to a local prison, where they’ll be broken into harness and saddle by inmates, before then being sold off to ranchers, as well as border patrolmen and police officers, who’ll presumably use the horses during arrests. The parallel between horse and prisoner is blunt but finds its inspiration in an actual government-run, prisoner-staffed training program.

As one of these unruly horses arrives at a Nevada jail, the terse Roman Coleman (Matthias Schoenaerts) is being transferred from an apparently lengthy stay in solitary to the general population. The man’s misanthropy and unconcealed look of ferociousness make him suitable only for outdoor work, where he finds himself drawn to the similarly tough and likewise soon-to-be-broken horse. Like the cells and pens it takes place in, The Mustang keeps its focus tight, sticking to Coleman’s immediate environs and psychological state—an unmistakably repressed, all-consuming guilt—rather than detailing prison life or his past. The specifics of his crime are withheld until late in the film, but it’s implied that it was sudden and brutal, and caused a rift between him and his daughter, Martha (Gideon Adlon), a relationship he’ll spend the rest of the film trying to repair. More important is the way he works through his guilt, the slow uncoiling of which forms the emotional heart of The Mustang.

Coleman’s relation to his horse is used as a lens to probe the specifically masculine form of his feelings, marking a narrative and thematic similarity to Chloé Zhao’s The Rider. Coleman’s sense of guilt and his time in solitary manifest as an anti-social inability to process any sort of frustration. He’s friendless and bristles at the most minor human interaction, even acting hostilely to Martha during her few visits. His threatening demeanor forms the thin shield between him and others, a line of defense that’s really one between him and his own psyche.

Coleman is still mired in the traumas of solitary confinement, and it’s the mute, resistant horse that motivates a personal reckoning—a therapeutic process in place of unwelcome human contact. Guided by a group of prisoners turned horse trainers led by the preternaturally cheery Henry (Jason Mitchell), Coleman eventually breaks (and bonds with) his recalcitrant mustang, allowing himself to face his battered conscience and Martha in a way he hasn’t been able to in a decade of imprisonment. The mustang-breaking regimen, built around patience, communication, and mutual understanding between horse and trainer, helps him to develop a semblance of control over his turbulent, cloistered mental life. As Henry plainly lays it out: “If you want to control your horse, first you gotta control yourself.”

Coleman’s path is most persuasively evinced in his tense body language. He’s rendered in both pointed and exaggerated fashion, walking with the bearing of a neo-Nazi with a plank nailed to his shoulders. Schoenaerts plays him with a heightened sense of mental torsion, toggling his voice between an anti-social murmur and a bullhorn yell. This often reads like a hasty sketch of pent-up rage, and in some respects it is; in one jarringly macho display, Coleman is glimpsed futilely boxing his uncooperative horse. But at the same time, the performance’s sustained intensity gives a palpable form to Coleman’s progressing emotional self-reflection, his gait and shoulders slowly easing as he teeters toward something like reconciliation.

The Mustang, though, diffuses its focused depiction of Coleman’s growth with extraneous material that gives the narrative a politically ambiguous valence. Subplots about drug smuggling and the gratuitous murder of a black inmate are introduced to little end. These facile and quickly discarded plotlines might signal The Mustang’s more general interest in the nature of violence, but they read as cheap ways to imbue the film with renewed stakes. Nonetheless, they don’t diminish the power and sadness of one particular glimpse of the world beyond Coleman: During a horse auction, he and his fellow trainers trot out their equines as the national anthem plays, and as American flags whip in the wind, agents, officers, and ranching families stand in bleachers and applaud the animals they’re about to buy.

The nasty irony of the scenes is effectively downplayed—it’s not even its center of gravity—such that any social bite feels incidental, but it casts the otherwise hopeful remainder of The Mustang with a lingering sadness. The moment is a reminder that Coleman’s personal successes are irrelevant to a larger cycle of crime and punishment, that more men like him will appear in prison while he continues to work through his issues in a small cell in the middle of nowhere, the sound of hooves occasionally ringing in the distance.

Review: In The Aftermath, a Soapy Love Affair Is the Only Battlefield

Review: Combat Obscura Depicts the Wounds of an Unending War