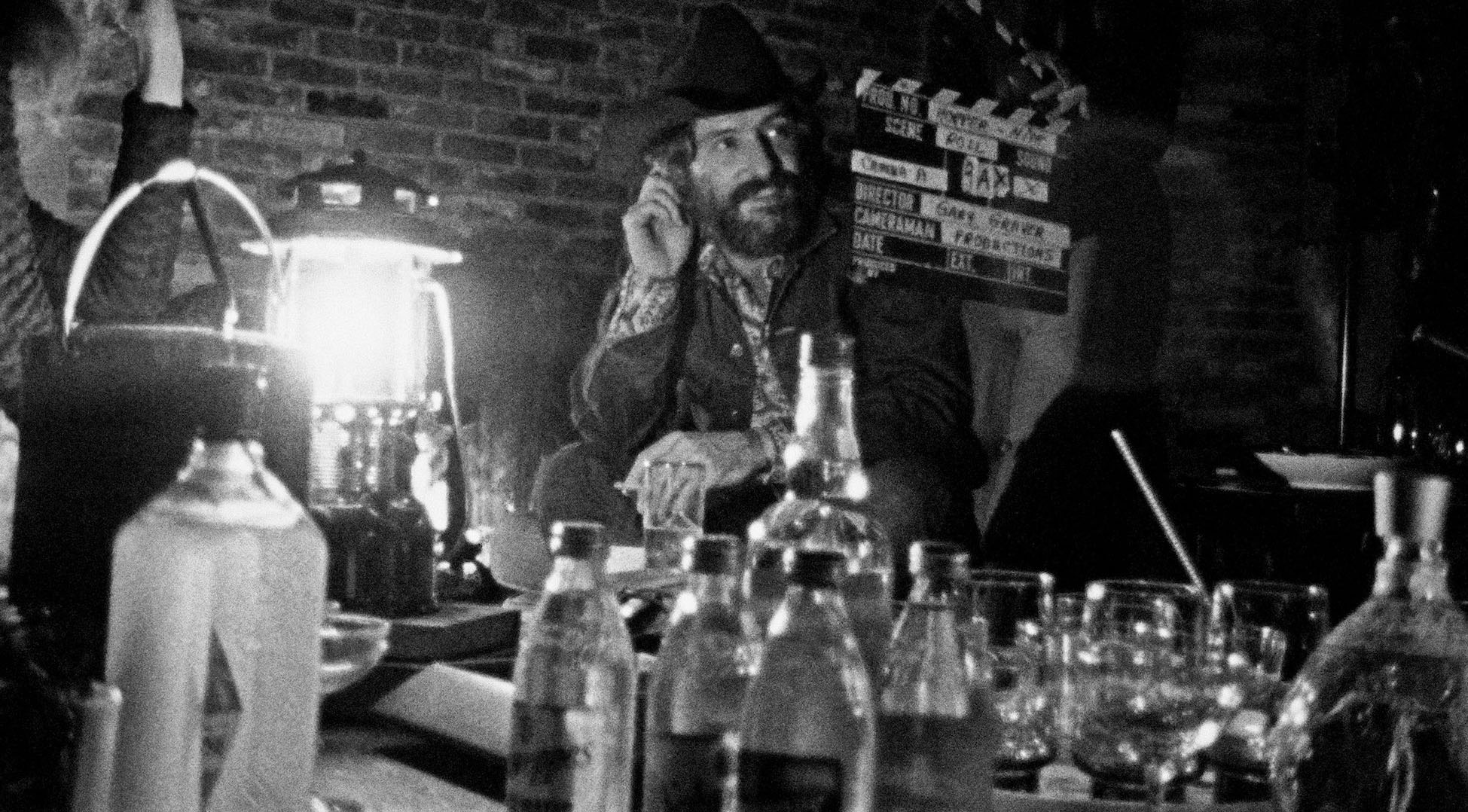 Composed of recently unearthed footage, Hopper/Welles features at its center a matchup that abounds in irresistible contrasts and symmetries. Shot in 1970, the footage documents a night when Orson Welles met Dennis Hopper in Los Angeles for a dinner that was intended as research for Welles’s passion project, The Other Side of the Wind. Hot off the success of his directorial debut, Easy Rider, Hopper was in Taos, New Mexico, editing The Last Movie. He was the face of the countercultural while at the forefront of a new auteur-forward movement in American cinema—the latter a status Welles enjoyed nearly 30 years earlier with his own directorial debut, Citizen Kane. So, in effect, Hopper/Welles allows us to see the past and then-present faces of vanguard cinema who’re united by their formal adventurousness and divided by personal style as well as, possibly, political orientation.

Artistically, Welles was every inch the rebel and iconoclast as Hopper, yet his richly musical voice and erudition fostered an impression of an establishment type, while Hopper, bearded, scraggly, clad in a cowboy hat, suggests a blend of outlaw and sensitive soul in the mold of Sam Shepard, only with a subtler strand of machismo. It’s evident early on that these various contrasts turn Welles on in Hopper/Welles. The film that would eventually arise out of The Other Side of the Wind, decades later, is a slipstream masterpiece about the relationship between classical and counterculture cinema, utilizing these poles as symbols to ponder the true possibility for revolution at a time when America, in the throes of the Vietnam War and the civil rights movement, was seemingly as close to the breaking point as it now.

Welles sees cinema, regardless of generation and political purview, as a game and an escape—a bourgeois toy that affirms our lives emotionally while taking us further from reality. And so the “reality” of The Other Side of the Wind dissolves in front of us, leaving us with haunting shards of poetry that somehow indicate the inner lives that don’t quite arise to the foreground. Welles got the heart of counterculture cinema, which is also concerned with the frail, illusive spectrum of reality, informing it with his exhilarating rococo compositions and kaleidoscopic editing syntax. The frailty of reality, of American myths, is also very much the concern of Hopper’s equally ambitious and extraordinary The Last Movie.

That alignment gives Hopper/Welles a punch that it might not have had if seen in 1970, before either The Last Movie or The Other Side of the Wind were finished. The film catches these icons as they’re fashioning similarly demanding and auto-critical movies that would both be doomed in their creators’ own respective lifetimes, before eventually undergoing critical reevaluation and release. Here, Hopper seems to know on a certain level that The Last Movie is going to be misunderstood and subsequently end his romance with Hollywood, and he partially seems to yearn for that reaction. Early in Hopper/Welles, Hopper offers an astonishingly accurate summary of his intentions with The Last Movie to Welles, which is both vague and eerily acute like the film itself. Hopper talks of detonating various American myths and seeking to distance audiences from his plot with the movie-within-a-movie framework. He also speaks of American naïveté and the magic of the Peruvian tribespeople, which leads to a debate between Hopper and Welles on the differences between tribes’ magic and studio magic that cuts to the heart of the obsessions driving each man’s showmanship.

As in Easy Rider and The Last Movie, Hopper is torn between lionizing and deconstructing the lure of cinema. He loves the films of Michelangelo Antonioni and Luis Buñuel and also frequently refers to global art cinema in general, drawn to the potentialities of cinema to render banal actions experientially profound to a mass audience—an idea to which Welles, who prefers a traditional narrative, is puckishly resistant. (Hopper praises the simplicity of a moment in Last Year at Marienbad, to which Welles replies that he can’t imagine anything much simpler than the Alain Resnais film.) Hopper’s grappling with his various dueling intentions and beliefs—between the intentions of cinema and his feelings about his country—come to embody the conflicts that plague many of us who wrestle with both complacent and revolutionary tendencies. For most of us, the former impulses win out hands down.

Much of Hopper/Welles is an intense bullshit session set in a cavernous room, with Hopper downing tall gin and tonics and chainsmoking Marlboros. A few attractive women sit at the sidelines, seemingly to further stimulate him, while Welles is entirely off screen, his voice cajoling, kidding, challenging, and directing his subject. This film is itself a riff on the divide between mythology and reality, as Welles sometimes assumes the personality of Jake Hannaford, the fictional film director played in The Other Side of the Wind by John Huston, while Hopper makes an art of dropping slippery quasi-bromides that he often reverses when Welles boxes him into a corner. This gamesmanship leads to startling moments. The left-wing Welles, as Hannaford, endorses fascism, while Hopper casually admits that his fraught childhood in Kansas with his mother was partially rooted in his wanting to sleep with her.

Finally, the master subject of Hopper/Welles arises, which is Welles’s obsession with Hopper’s politics as they relate to his blossoming career as a film director. Hopper, who would eventually become conservative, is clearly troubled by his country yet hesitant to spell his convictions out. Hopper claims to fear that the F.B.I. will persecute him, reminding Welles of the McCarthy hearings, while Welles in turn reminds Hopper that he himself endorsed leftist politics with no recourse. Hopper’s paranoia often feels like a game. One assumes that Hopper actually wishes to avoid over-explaining his art, though Welles cuts to a deeper secret that seems to explode the trickery-for-its-own-sake playfulness of their parrying and thrusting.

After deftly dodging Welles’s questions for something like a third of Hopper/Welles’s 130-minute running time, Hopper admits that he feels a revolution is impossible in a country with America’s military industrial complex—a practical, persuasive, and devastating claim to hear from the star and director of the American countercultural film, which brings to the forefront the sense of hopelessness that dogs pockets of American progressivism to this day. (Both men clearly feel that politics, like cinema, is largely another game of mythmaking.) This claim also complements earlier Hopper comments, when he essentially says that Easy Rider is romantic bullshit that’s misunderstood by much of its audience. And such sentiments also clarify the self-annihilating despair of The Last Movie, a greater, more daring work than Easy Rider.

Welles cheekily wrestles onto the screen a version of Dennis Hopper that was never seen before or again—a version that suggests the totality of elements that Hopper channeled into various projects throughout the years. Hopper is earnest, elliptical, sometimes almost smugly modest, which Welles challenges frequently, though Hopper often appears to be honestly uncertain about his role in pop culture and almost desperate to flee from it—a desperation, a simultaneous desire to be heard and to vanish, which can spur volcanic violence.

The film’s aesthetic is also at deliberate odds with Hopper’s skittishness, as it’s composed entirely of arresting, jittery black-and-white close-ups of the actor-director, with clapboards frequently intruding to remind us that this confrontation, this exorcism, is, like the rest of Welles and Hopper’s work, only a movie. Both men understand that the artifice of the cinema, its inherent fakeness, is the wellspring of its importance and its danger. We seek distraction for communion and meaning, often at the expense of the latter.

Review: I Carry You with Me Turns a Gay Couple’s Search for Freedom into a PSA

Review: The Glorias Is a Perspective-Shifting Ode of Gloria Steinem’s Life