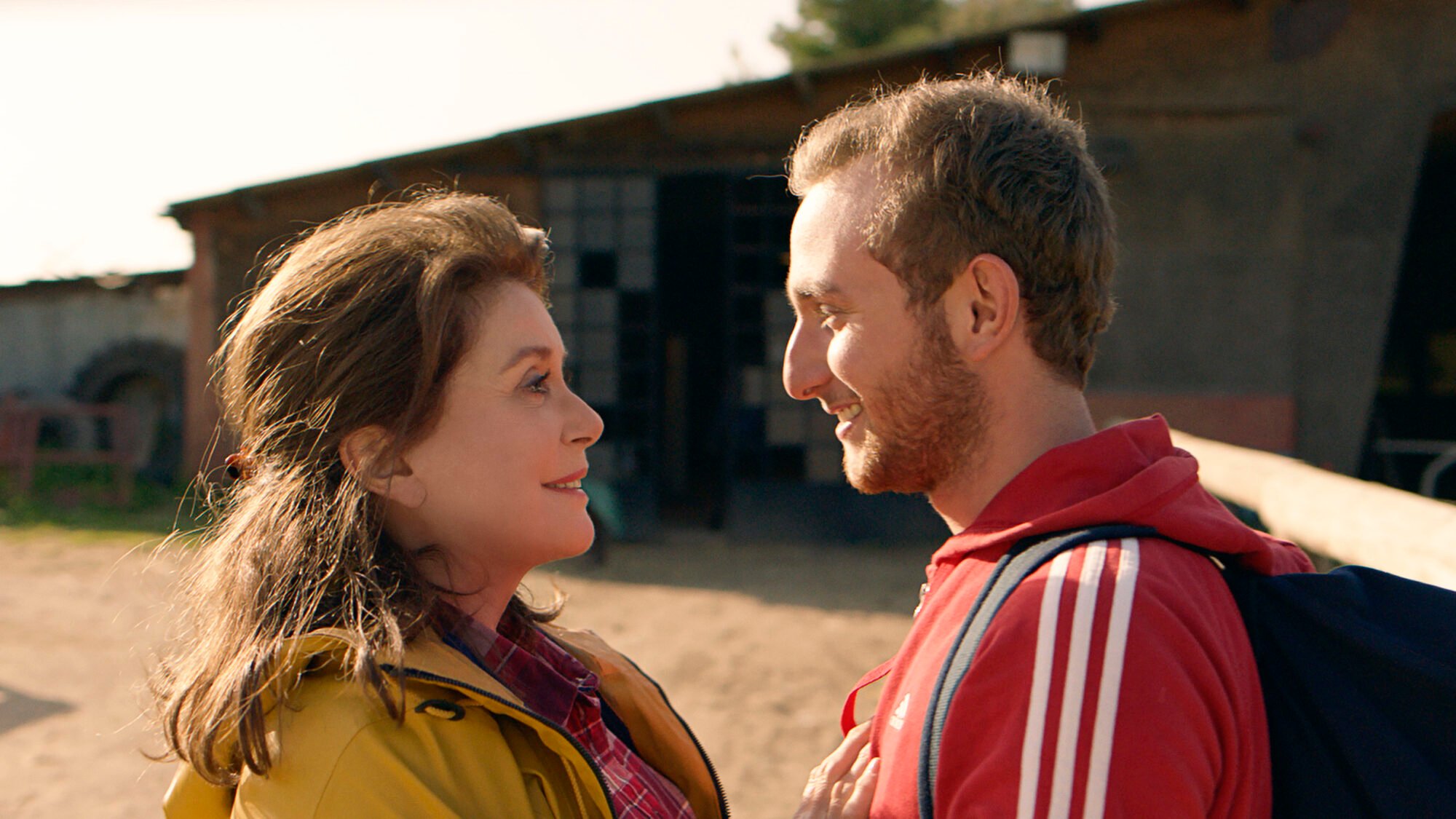 At the height of its power, ISIS was attracting tens of thousands of foreign fighters per year to join its fledgling but ruthless army. Among Western European nations, France saw the highest number of its citizens cross into Syria or Iraq to join the fight. André Téchiné’s Farewell to the Night takes up what is suddenly, now that ISIS is in the decline, a historical phenomenon, as a basis for exploring the filmmaker’s characteristic themes of suppressed sexual dynamics and their roots in the family. The film’s main action takes place across a few days in March of 2015, during which a young man, Alex (Kacey Mottet Klein), visits his grandmother’s (Catherine Deneuve) farm with secret plans to abscond to Syria.

Farewell to the Night opens with a foreboding sequence in which Deneuve’s character, Muriel, and her business partner, Youssef (Mohamed Djouhri), are inspecting the damage done by a wild boar to their cherry orchard. The scene stands out for its highly metaphorical character, as the pair contemplate what’s to be done about the boar—whether to build a barrier or to shoot it—when a solar eclipse passing through France causes them to look up to the sky.

“L’adieu à la nuit,” the titles read over the image of an occluded sun. The film’s French title is taken from a line Alex speaks later, referring to how joining ISIS will be like entering a permanent daytime. The eclipse refutes Alex’s hope to repress the night, suggesting both the true darkness of his chosen mission and the impossibility of denying an entire half of existence. Alex has been converted and radicalized by his childhood friend, Lila (Oulaya Amamra), whom he plans to marry after fleeing to Syria together. Although, as we later find out, Lila leads a secret life as an online terror-monger, she’s been helping out at Muriel’s farm and riding school while Alex was away. Muriel likes Lila—until, that is, she discovers the pair has forged 6,000€ of checks in her name to fund their ISIS conscription.

The film’s thesis is that Alex is driven toward fanaticism by things other than devotion to Islam. He’s still pained over his mother’s long-ago death, and estranged from his father as a result, so his anger and disaffection has roots that precede his newfound belief. In fact, it’s implied that even Lila has been conditioned to callousness more by her alienation from the real world than by the inherent appeal of a poisonous ideology. When Lila reports that she saw the eclipse, Muriel asks about the glasses she used. “No, I mean on TV,” Lila reports. In several places, the screenplay emphasizes how much time she spends promoting violent jihad on the Internet—another problematic product of social media echo chambers.

But much of Téchiné’s commentary on the topic of the angry youth who join ISIS seems lifted from a cursory glance at the abstract of a sociology paper. Looking to show how religious dogma can be used to justify anything, the filmmaker has Lila verbally cycle through Islamic law to find an excuse for robbing Muriel. Pointing out the hypocrisy of religious grandstanding, Téchiné has Lila cite the treatment of seniors as one of the reasons she hates Western society, and then a few minutes later behave carelessly toward a senior citizen. Wanting to emphasize that beneath the righteous piety of ISIS’s religious fanatics are troubled kids looking for a new kick, he first shows us the young radicals being rigidly observant, and then the overt ways they defy their own strict moral code, like smoking.

Perhaps the most glaring example of this oversimplification is a cross-cutting sequence midway through the film that conspicuously positions Youssef as a “good Muslim.” Over a crowded lunch at the farm hosted by Muriel and Youssef, a teenage girl puts on a wild, free-spirited dance to Sia’s “Chandelier.” Meanwhile, Lila and Alex gather with like-minded Muslims and participate in solemn religious ceremonies. It’s worth noting that Téchiné’s roving camera emphasizes how happy Alex and Lila are to be talking with people they feel are theirs, but the joy Lila feels at wearing a niqab among other women is clearly meant to be in ironic contrast to the unbounded pleasure of dancing to Sia.

Clearly, Farewell to the Night’s intention is to put human faces to ISIS recruits, but its representation of radicalization is still uncomfortably one-sided and one-dimensional. Alex is a young, white Frenchmen whose motivation to join the terrorist state is fully fleshed out and pathologized in almost Freudian terms—oedipal resentment and, as implied in a late-story revelation, sexual repression. His fellow radicals—including Lila—who are brown and black, don’t get such a robust examination of their motives. While it’s clear that radical, militant Islam gives Alex a peace of mind about death and a sense of agency over his life, it’s unclear what, beyond attracting Facebook likes, drew Lila in. No doubt Téchiné was attempting to bring ISIS recruitment closer to home by making his main character a “typical” French kid, but the film arguably contributes to a pattern in which we are more than ready to examine the motives and accept the humanity of white killers but take brown killers as a given.

Review: Birds of Passage Is a Doom-Laden Grappling with Cultural Memory