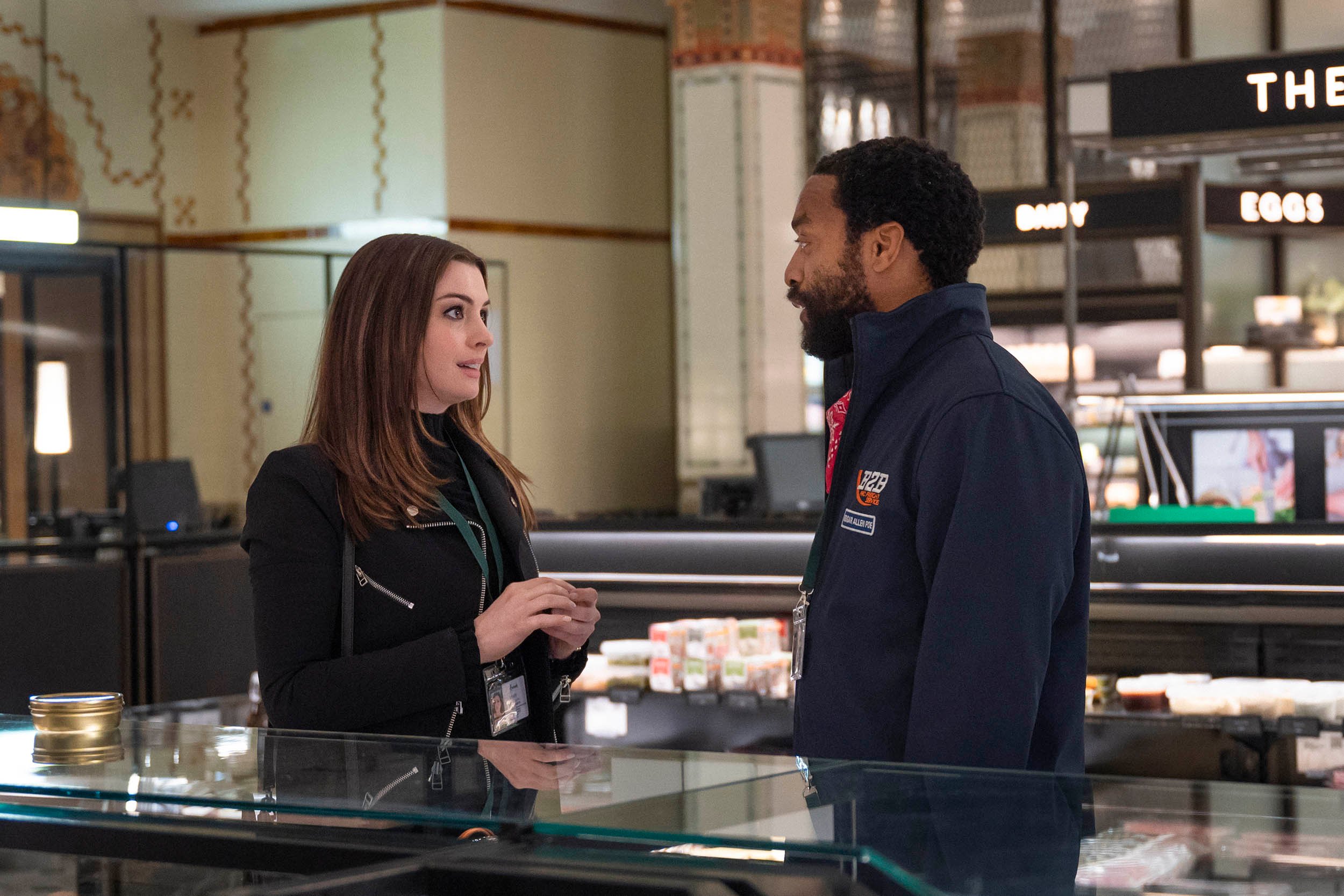 Doug Liman’s Locked Down was conceived and shot in the midst of the COVID-19 pandemic, and while it seeks to capture how lockdown has affected our collective mental health, it more clearly reveals the cabin fever of its makers. The film presents a couple that’s grown apart from being around each other all day, a state of affairs that’s easier to believe in the end than the fact that sullen, withdrawn lorry driver Paxton (Chiwetel Ejiofor) has been in a relationship with type-A CEO Linda (Anne Hathaway) going on 10 years. Barely on speaking terms with each other, they talk about their problems with friends and loved ones via video calls, but even when they’re offline, the pair is often filmed from awkward, unflattering angles that will be at once familiar and loathsome to anyone who’s been forced to do remote conferences in the last year, as if the walls between the characters’ digital communication and their distanced in-person lives have started to break down.

While a furloughed Paxton drifts around his London home trying to find something to occupy his mind, Linda puts on business formal attire in order to sit down for video calls with employees whom she must fire as part of her company downsizing its operations, including one man whose very young child wanders into the room just in time to hear the news—a moment that’s on-the-nose but acutely plausible. There are other amusing and relatable moments that demonstrate not only how Paxton and Linda have adjusted to lockdown, but how they’ve dealt with the pandemic, as in a scene where Paxton heads to a corner store and barks at a man with an excess of toilet paper in his hands: “How many arses have you got?”

But these moments, given their aggressive emphasis on the minutiae of an experience that millions of people around the globe are still going through, ultimately add too much chaotic energy to a scenario that’s defined by its relentless banality. It’s also somewhat difficult to sympathize with just how intense Linda and Paxton’s cabin fever has become once you get a complete sense of the sprawl of their home, a tony brownstone with a suspiciously unkempt backyard that would easily allow a small army to socially distance, and comfortably so. Additionally, the pretense of realism clashes harshly with how theatrically Hathaway and Ejiofor play their characters, declaiming each line of dialogue to the point that even Linda and Paxton’s most casual conversations feel like exposition dumps for their shared history.

It takes nearly half the film for an actual plot to materialize, one involving Paxton getting a driving job removing valuables from Harrods before it shuts down (suggesting the film is set in late March), including a diamond that Linda’s company is displaying at the store and is going to be auctioned. Here’s where things get difficult to parse: Though Paxton is tempted by the potential of stealing the diamond, it’s the financially and professionally comfortable Linda who really commits to the idea, and for reasons that even Paxton cannot surmise. As a manifestation of her dissatisfaction with her failing relationship and a job that rewards her for handing others their pink slips, Linda’s fixation on the heist could be a solid bedrock for a film that more willingly embraced its hyperreal elements, but Locked Down’s melding of broad caper-movie comedy with a somber encapsulation of “uncertain times” never coheres.

Had the filmmakers taken a more easygoing approach, Locked Down might have landed in the realm of The Thomas Crown Affair, with its central crime ultimately an act of sensual foreplay in a romantic entanglement over a greedy means to an end. But Liman shoots the final act with a flat dutifulness that makes Hathaway and Ejiofor look as if they were more preoccupied with the chance to roam through Harrods without being hounded by fans and photographers than with charting their characters’ efforts to pull off the diamond heist.

It doesn’t help that Linda and Paxton, right to the very end, relay every single thing that enters their minds. In an early scene emblematic of Lock Down’s default mode, Paxton asks “Why do people think honesty is good?” when Linda speaks too bluntly about her issues with their relationship. No room is left here for us to intuit anything about these characters for ourselves, and after a while, it’s as if the filmmakers are endorsing the belief that every conflict should be talked out ad nauseam. Perhaps that’s the inevitable result of Steven Knight having written the film in lockdown, but it mostly leaves us with the impression that this comedy of remarriage never got the chance to work out its first-draft problems.