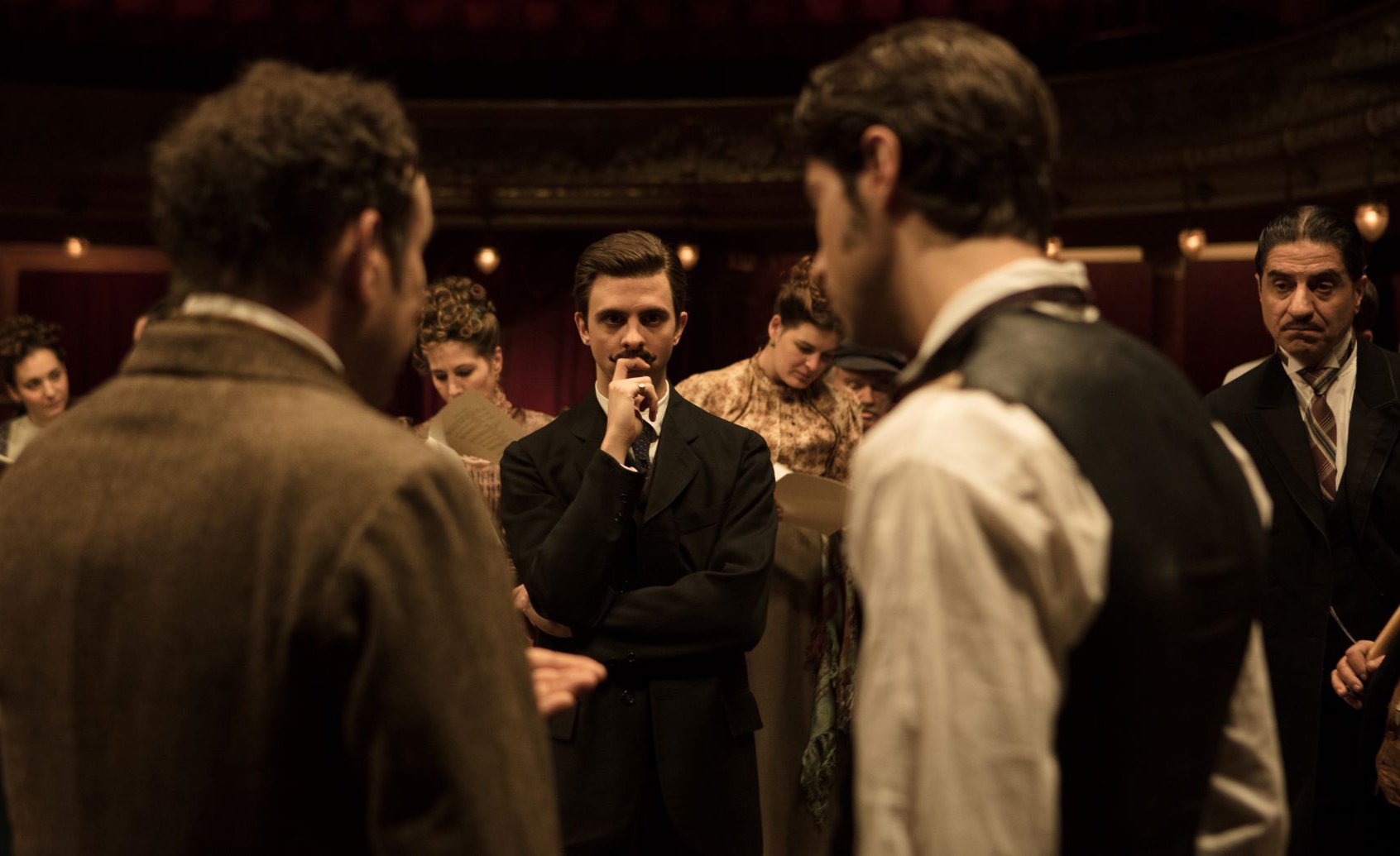 Alexis Michalik’s Cyrano, My Love wears its fondness for Shakespeare in Love very much on its sleeve. Though it serves up nuggets of truth, its take on Edmond Rostand (Thomas Solivérès) and the turbulent circumstances surrounding his creation of Cyrano de Bergerac is an outlandish one, imbued with an airless blend of buoyant comedy and soap-operatic backstage drama that recalls John Madden’s Oscar winner. And while Michalik positions Rostand as the story’s triumphant artist, the French dramatist is often reduced to a skittish ninny—as opposed to the pompous ass that Joseph Fiennes’s Shakespeare was positioned as—whose great art emanates not from the mind, but the cockles of the heart.

For a film so hellbent on the notion that Cyrano de Bergerac was inspired not only by actual events, but real emotions, there’s surprisingly little effort made to articulate with any specificity the conflicted feelings behind Rostand’s penning of what would become the most famous French play of all time. The initial catalyst for his play’s central conceit occurs when he steps in to help an actor friend, Léonidas (Tom Leeb), struggling to find the words to woo a costume designer, Jeanne (Lucie Boujenah), on whom he has a crush. Rostand, in one of the film’s many blatant nods to Cyrano de Bergerac, begins to feed his friend a barrage of romantic lines and relish the secrecy with which he can play out a love affair without disturbing his marriage with his endlessly patient and supportive wife, Rosemonde (Alice de Lencquesaing).

Yet, rather than teasing out the ample psychosexual baggage that should arise from the cognitive dissonance of Rostand writing daily love letters to Jeanne, his unknowing muse, while still professing, with complete honesty, that his only true love is his wife, Michalik pivots his focus to the swirling chaos of Cyrano de Bergerac’s production. With Rostand’s emotional conflict left fairly nebulous, Cyrano, My Love never quite gets to the root of the author’s inspiration, leaving its familiar theatrical farce about the troubles of mounting a stage play grounded in neither genuine emotion nor any palpable stakes.

As the hurdles that Rostand and company face in staging Cyrano de Bergerac grow bigger and Rostand writes pages to be rehearsed before the ink dries, the film introduces a parade of quirky, ostentatious characters. From the historical, such as Sarah Bernhardt (Clémentine Célarié) and Anton Chekhov (Misha Leskot), to the imagined, such as a prostitute (Mathilde Seigner) who’s foisted into the lead role of Roxane, each one is more thinly conceived than the next, with eccentricities dialed up to 11. The most egregious of these larger-than-life characterizations, however, is Monsieur Honoré (Jean-Michel Martial), the black café owner whose sole purpose is to repeatedly tap into his struggles as a minority as a means to galvanize the all-white cast and crew, who he then cheers on from the sidelines.

Cyrano, My Love’s lone performative bright spot comes in the form of a surprisingly nimble turn by Olivier Gourmet, known primarily for his dour turns in many of the Dardenne brothers’ films. Gourmet lends both humor and pathos to the play’s famous but desperate lead actor, Constant Coquelin. But while Coquelin steals the spotlight in a number of scenes, Rostand remains little more than a perpetually anxiety-ridden artist who virtually stumbles into writing a masterpiece during a helter-skelter production. And with little care given to rendering the intense emotional tumult that spurred his artistic process, all the pandemonium of Cyrano, My Love proves to be much ado about nothing.