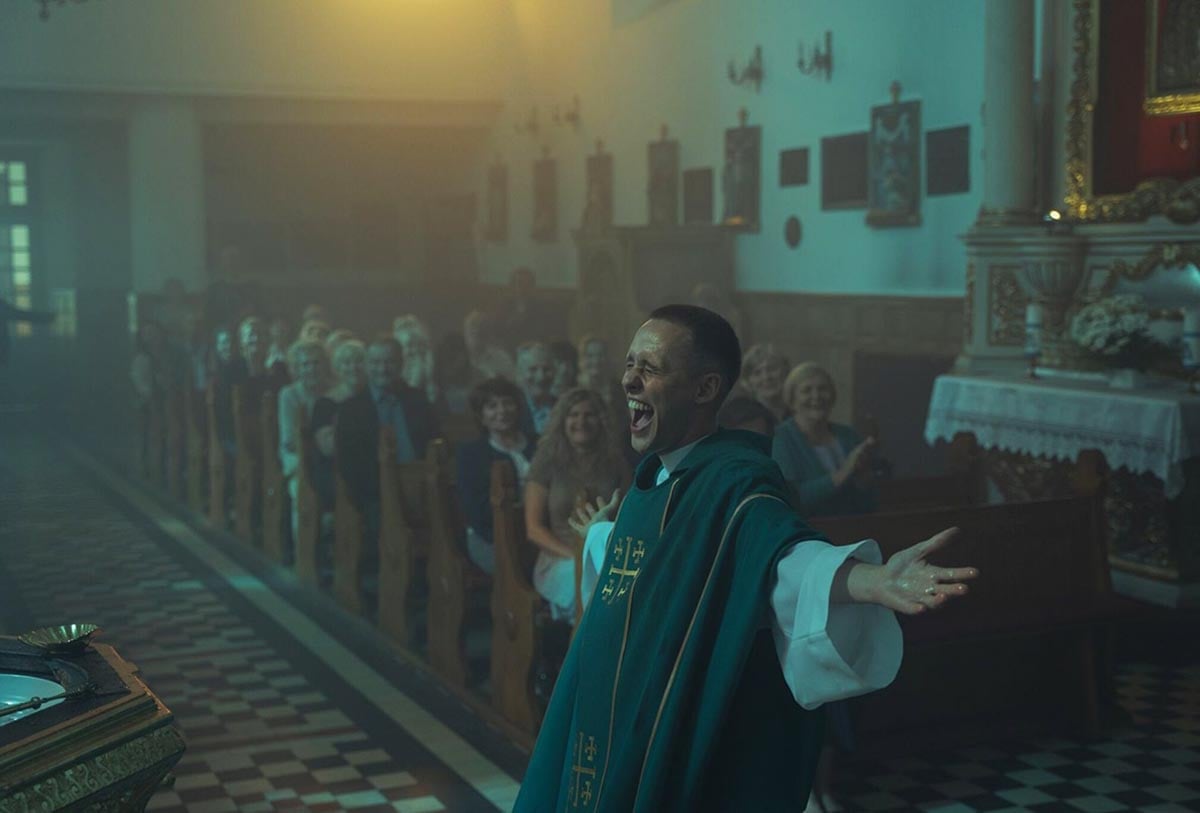 Using as its jumping-off point the surprisingly common phenomenon of Polish men impersonating priests, Jan Komasa’s Corpus Christi weaves an elaborate, thoughtful, and occasionally meandering morality tale about the nature of faith, grief, and community in the 21st century. Daniel (Bartosz Bielenia), a 20-year-old juvenile delinquent, is a recently converted believer, but he’s also an opportunist. After finding himself mistaken for a man of the cloth upon arriving in a small, remote town, Daniel decides to strap on the clergy collar from a costume and play the part for real. Better that than head to the sawmill for the backbreaking work his former priest, Father Tomasz (Lukasz Simlat), has lined up for him.

This setup has all the makings of a blackly comic farce, but Komasa and screenwriter Mateusz Pacewicz play the scenario straight, using Daniel’s fish-out-of-water status as a catalyst for interrogating the shifting spiritual landscape of a Poland that’s grown increasingly disillusioned of both its religious and political institutions. For one, a general wariness (and weariness) of the cold, impersonal ritualism of the Catholic Church helps to explain why many of the townspeople take so quickly to Daniel’s irreverent approach to priesthood, particularly his emotional candidness and the genuine compassion he shows for his parish.

That is, of course, once the young man gets past his awkward stabs at learning how to offer confession—by Googling, no less—and reciting Father Tomasz’s prayers, discovering that it’s easier for him to preach when shooting from the hip. The convenient timing of the town’s official priest (Zdzislaw Wardejn) falling ill, thus allowing Daniel to slide comfortably into the man’s place, is a narrative gambit that certainly requires a small leap of faith. But it’s one that engenders a fascinatingly thorny conflict between a damaged imposter walking the very thin line between the sacred and the profane, a town still reeling from the trauma of a recent car wreck that left seven people dead, and a shady mayor (Leszek Lichota) yearning for a return to normalcy so that his corrupt dealings can run more smoothly.

The grieving process of the family and friends of the six teenagers lost in this tragedy is further complicated by rumors that the other driver had been drinking, leading to his widow (Barbara Kurzaj) being harassed and completely ostracized by the community. The falsity of this widely accepted bit of hearsay shrewdly mirrors Daniel’s own embracing of falsehood and inability to transcend the traumatic events and mistakes of his own recent past. Yet, interestingly enough, it’s the vehement young man’s dogged pursuit of the truth in this manner, all while play-acting the role of ordained leader, that causes a necessary disruption in the quietly tortured little town. His unwavering support of the widow, despite the blowback he gets from the mayor and several of the deceased teenagers’ parents, however, appears to have less to do with a pure thirst for justice or truth than with how her mistreatment at the hands of those around her mirrors his own feelings of being rejected by society.

It’s a topsy-turvy situation that brings into question the mindlessly placating role that the church and political figures play in returning to the status quo, even if that leaves peoples’ sins and darkest secrets forever buried. And while Daniel’s adversarial presence both shines a light on the town’s hypocrisy and their leaders’ corruption, his own duplicity isn’t overlooked, preventing Corpus Christi from settling for any sweeping moral generalizations, and lending an ambiguity to the ethics of everyone’s behavior in the film.

Whether or not the ends justify the means or fraudulence and faith can coexist in ways that are beneficial to all, possibly even on a spiritual level, are questions that Komasa leaves unanswered. Corpus Christi instead accepts the innate, inescapable ambiguities of faith and the troubling role deception can often play in both keeping the communal peace, and in achieving a true sense of closure and redemption in situations where perhaps neither are truly attainable. Although the film ends on a frightening note of retribution, it’s within the murky realm of self-doubt and spiritual anxiety that it’s at its most audacious and compelling.

Review: Come and See Is an Unforgettable Fever Dream of War’s Surreality

Review: Stella Meghie’s The Photograph Isn’t Worth a Thousand Words