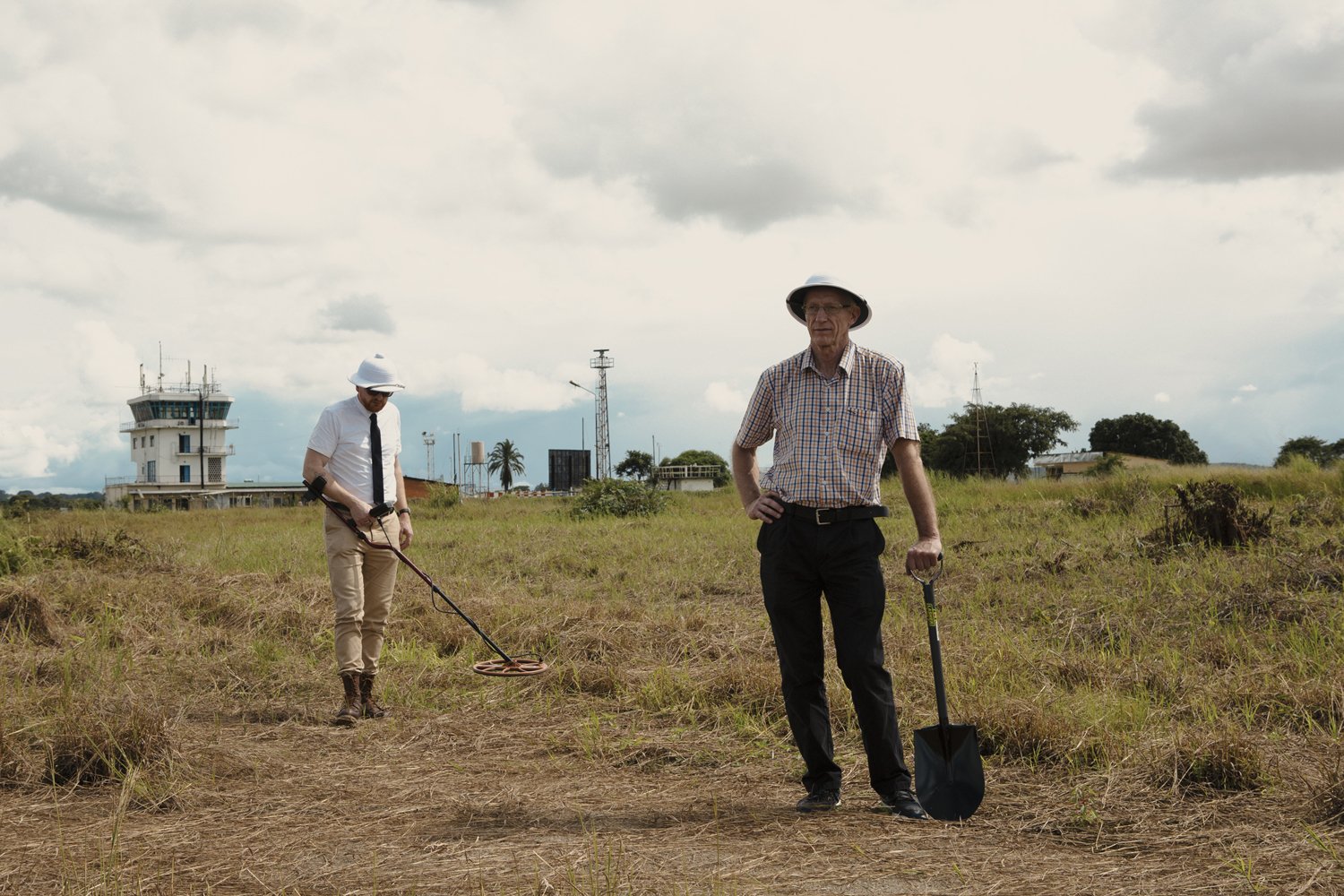 Like Oliver Stone’s JFK and David Fincher’s Zodiac, Mads Brügger’s documentary Cold Case Hammarskjöld is about a mystery that isn’t solved, and how that inconclusiveness spotlights the insidious functions of society. Brügger also has in common with Stone and Fincher a visceral fascination with the minutiae of a particularly flabbergasting conspiracy theory. At one point near the end of the film, Brügger even comes clean, admitting that his investigation of the suspicious 1961 plane crash that killed United Nations Secretary General Dag Hammarskjöld is mostly a pretense for allowing him to partake of a larger reportorial adventure that includes, among other things, Belgium assassins. By that point, though, Brügger needn’t bother with the confession, as his true obsessions are already quite clear.

Brügger is also the de facto host of Cold Case Hammarskjöld, and he has a penchant for hamming it up that brings to mind Werner Herzog. At the start of the film, as if seemingly ready for a safari, the Danish filmmaker is seen wearing an all-white uniform, which he claims is the wardrobe worn by the ultimate villain of his narrative. Brügger is holed up in a hotel with two African secretaries, Saphir Mabanza and Clarinah Mfengu, dictating to them the events we’re about to see. Both the wardrobe and the presence of these secretaries are gimmicks, and while the former is harmless, the latter is of questionable taste.

Much of the film pivots on various colonialist atrocities wrought in Africa by the British and other imperialist powers. And so it seems that Brügger wants the shock of these implications to register on the faces of Saphir and Clarinah, people who have a potentially intimate connection to his alternate history. In other words, he seems to have hired these women in order to achieve a sensational effect. To their credit, they don’t oblige him, and their sober intensity suggests that they don’t need a white man to tell them of the evils of the world.

Of course, Brügger isn’t trying to be likable, as he’s pointedly allergic to the pathos affected by Herzog and, more gallingly, Michael Moore. There’s something of an irony to many first-person documentaries: They prove that bad news often makes for good drama, with their makers all the while feeling the need to make a show of being enraged or saddened. Brügger, who resembles a slimmer Louis C.K., never once bothers with this pose, and his honesty gives Cold Case Hammarskjöld an aura of self-absorption that’s weirdly bracing and resonant in an age that’s dominated seemingly by nothing but conspiracy theories, “alternate facts” that suggest that reality is dictated by those with the most power. Brügger, a scrappy journalist, seeks truth as a means of accessing that very power, looking to cement his own name.

Brügger’s narrative is an intimidating thicket of dead ends, coincidences, and a seemingly endless procession of interviews with creepy elderly white men who almost certainly know more than they care to admit. Hammarskjöld was a drab-looking, pipe-smoking Swedish diplomat whom many assumed would be the very embodiment of minding the status quo of global politics, though he turned out to be an idealist who was especially concerned with the exploitation of the Congo. Several powers were vying for control of the Congo’s mineral resources, including Belgium, the Soviet Union, and Britain, and Hammarskjöld supported nothing less than revolution, leading to a costly U.N.-backed military mission in Katanga. On September 18, 1961, a U.N. plane carrying Hammarskjöld went down in a field in Northern Rhodesia—an area that’s now part of Zambia—eight miles from the Ndola airport, which Brügger memorably describes as a perfect “kill room” for being tucked away from prying eyes.

Following a labyrinthine trail, Brügger makes an intoxicatingly convincing case for the U.N. DC-6 crash, which killed Hammarskjöld and 15 others, as a murder conspiracy. Interviewing people who lived near the Ndola airport at the time, Brügger reveals that investigators didn’t pay any attention to these witnesses, who spoke of bursting, gunshot-like sounds and of fire coming from the plane—negligence that’s probably due as much to racism and a disinterest in the truth. Brügger also speaks with Charles Southall, a former official of the National Security Agency, who heard a recording of the crash that references a second plane and gunshots. Along the way, various potential smoking guns pop up, including a panel of metal riddled with what appears to be bullet holes, and, most ghastly, an ace of spades card that was placed on Hammarskjöld’s corpse, which was remarkably and inexplicably intact following the crash.

The documentary’s structure is somewhat loose, reflecting how detection often involves running in circles, discarding trails only to see them heat up again, and so forth. At times, Brügger’s transitions can be murky, as he’ll be talking to a new person before we can entirely digest how he arrived at this point. But the somewhat arbitrary quality of Cold Case Hammarskjöld becomes a significant source of its power, suggesting less a singular answer than a reality composed of a hundred half-truths. Eventually, Brügger homes in on a secret operation known as the South African Group for Maritime Research, or SAIMR, which becomes the object of the filmmaker’s obsession, to the point that Hammarskjöld is nearly forgotten.

Brügger never entirely proves SAIMR’s existence, as he’s led to the organization via documents uncovered from South Africa’s Truth and Reconciliation Commission that are suspiciously on the nose, suggesting the stuff of bad spy fiction. SAIMR is said to be a private mercenary group, probably serving the U.N. in secret, and responsible for Hammarskjöld’s murder as well as a plot to kill the black population of Africa with cheap medical centers that are actually giving patients shots of the H.I.V. virus. This revelation is so operatically evil, so beyond the pale of a liberal’s worst fantasies, that it serves to transform Cold Case Hammarskjöld into a kind of political horror film. And Brügger, in his meticulous sense of sensationalism, does prove one point via his lack of answers: that he and his dogged collaborators are asking questions which should’ve been posed at much higher levels of multiple chains of government. In Brügger’s hands, the general indifference of the major world powers to the possible murder of a key political figure suggests nothing less than maintenance of a diseased hierarchy.

Review: Blinded by the Light Is a Wet, Sloppy Kiss to Bruce Springsteen