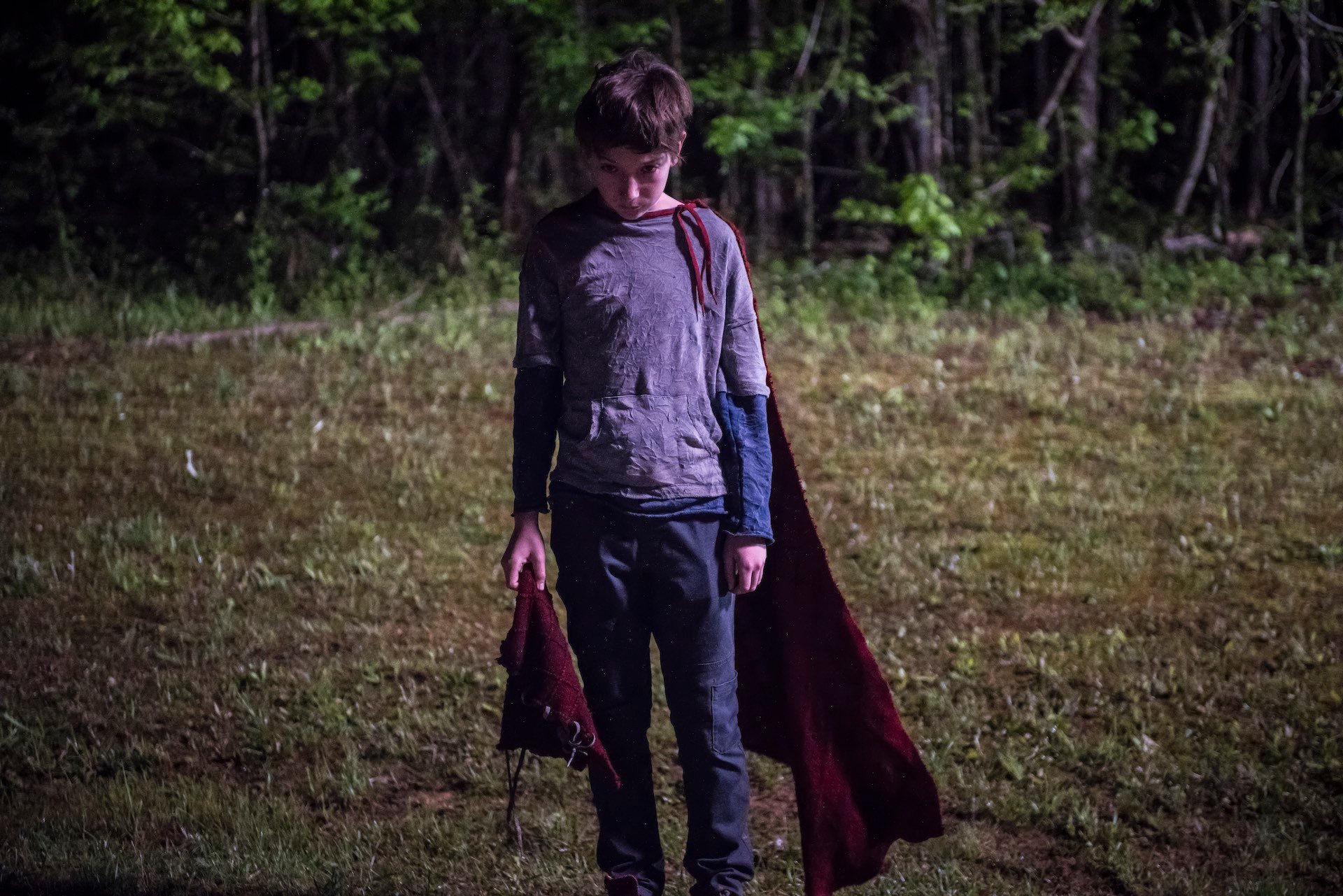 Like a lot of kids squirming through puberty, Brandon Breyer (Jackson A. Dunn) is an asshole. Unlike most, however, he’s from outer space and possessed of formidable superpowers. Soon after learning of his abilities, he stalks a classmate, Caitlyn (Emmie Hunter), who consoled him in class after he was teased for his incredible smarts. Brandon makes a show of controlling Caitlyn’s laptop before appearing outside her bedroom window, eerily floating in the air. By this point in director David Yarovesky’s Brightburn, one is still optimistic that Brandon’s creeper tendencies will be the most insidious of his problems. But when Caitlyn calls him a pervert, after letting him fall to the ground during a “trust fall” exercise in gym class, Brandon crushes the bones in her hand after she’s forced to help him up. By the end of the film, Caitlyn will prove to be one of the lucky ones.

That Yarovesky and screenwriters Brian and Mark Gunn don’t exactly push the link between Brandon’s pubescence and his growing self-awareness isn’t the first sign that something is amiss here. Right out of the gate, Brightburn reveals itself unwilling to animate its characters’ emotional dramas, using visual shorthand to simply hint at them. In the opening scene, set more than 10 years in the past, the camera pans across a bookshelf full of fertility books, informing the audience that Brandon’s parents, Tori (Elizabeth Banks) and Kyle (David Denman), really want to have a baby. Later, while helping his dad with chores, Brandon accidentally throws a lawnmower halfway across the family farm. This is when he recognizes that he has superpowers, but rather than prolong the kid’s doubt across more than one scene, the film zips straight to the moment where he’s about to shove his hand into the lawn mower’s spinning blades to confirm his suspicions that he’s nothing short of invincible.

More genre films—more films, period—could stand to have a lot less fat on their bones, but the way Brightburn shuttles through its 90 minutes, it’s as if it’s been stripped even of its most crucial narrative parts. Outside of one pulpy hallucination sequence, the film stubbornly refuses to give a concrete sense of the desperation that drove Tori and Kyle to adopt Brandon, just as it can’t be bothered to give shape to the mythology of his creation—or rather, his arrival. For a spell, though, this suggests a purposeful show of evasion. Much is made of the red light that peeks out from the floorboards in the family barn and to which Brandon is drawn throughout the film. If you’re a fan of Larry Cohen’s canon, you may wonder if the kid will be revealed as a kindred spirit of the ever-glowing human-alien antagonist from God Told Me To, here to make sport of our biological urge to procreate in our increasingly decaying world.

No such luck, as Brightburn is a meaningless mishmash of disparate genre elements. The truth of what lurks beneath the floorboards turns out to be of no particular consequence—not exactly a red herring, just a bit of hogwash that confirms Brandon to be a gene splice of Damien and Superman. Maybe a sense of majesty, of mythic grandeur, might have made him feel as if he was less arbitrarily willed into being, though Yarovesky certainly conveys the weight of the kid’s killing spree. Not its existential weight, only its repugnant force. At one point, one of his victims struggles to hold up the lower part of his grotesquely shattered jaw, as Brandon pulls off the mask that he wears because, presumably, he understands that that’s what someone with superhuman powers should do. Brightburn never shows us how Brandon came to such a realization, but it does let us glimpse the stone-cold delight he takes in erasing human life—a spectacle of violence that exists for its own soulless sake.

Review: Aladdin Is a Magic Corporate Ride to Nowhere Special

The Nightingale Trailer: Aisling Franciosi and Sam Claflin Star in Jennifer Kent’s Follow-Up to The Babadook