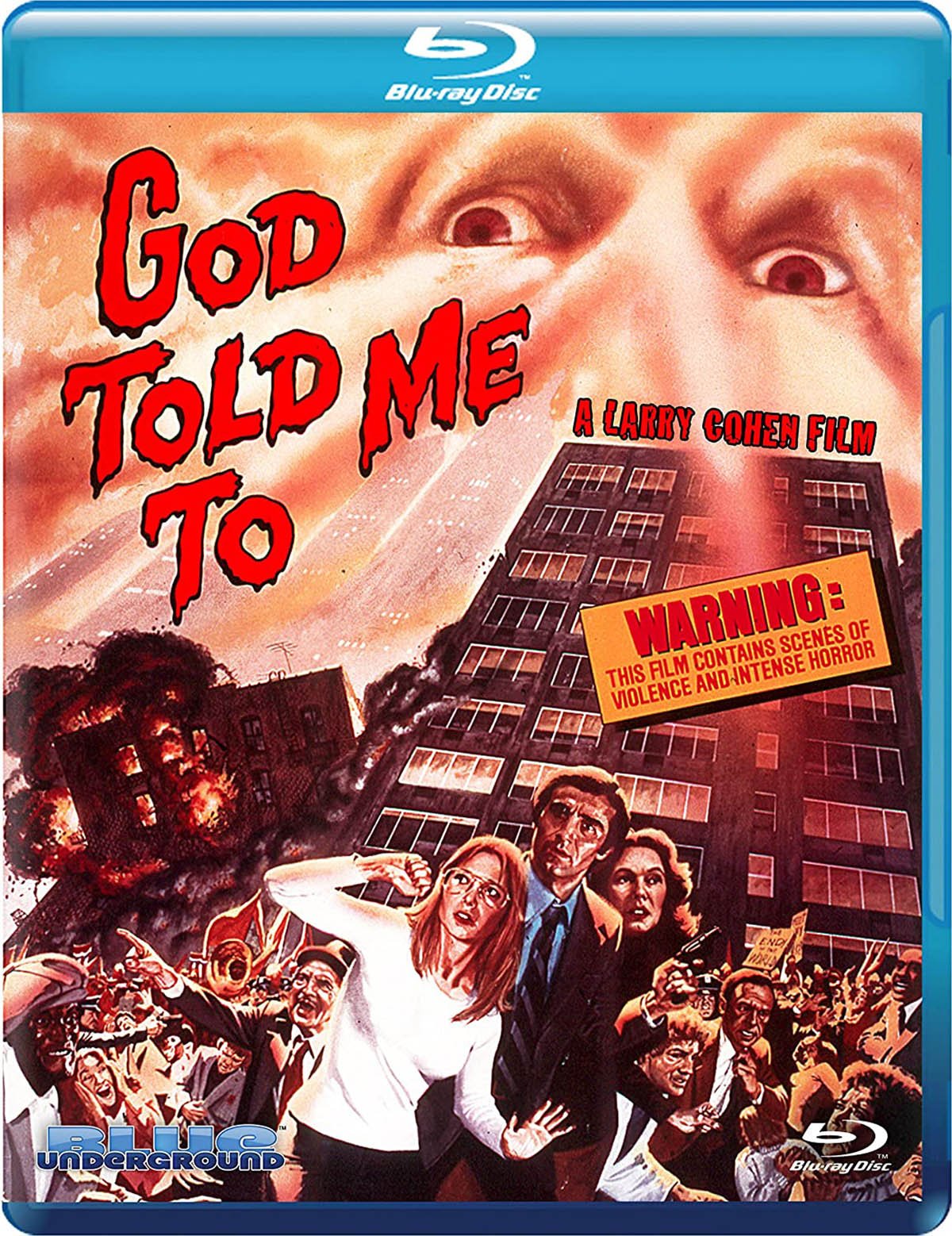 Larry Cohen’s God Told Me To is a Catholic-themed horror movie that’s characteristically obsessed with guilt, repression, and hypocrisy. Peter Nicholas (Tony Lo Bianco), an N.Y.P.D. detective, is a basically conventional churchgoer who lives, nevertheless, in an open arrangement with his wife, Martha (Sandy Dennis), and girlfriend, Casey (Deborah Raffin), that leaves all parties adrift and lonely. Peter’s untethered from his loved ones, and detached from his faith and society at large. Even Peter’s fellow cops distrust him, particularly his preoccupation with religion and his devotion to explaining a series of nasty, seemingly arbitrary homicides that are related only by the respective killers’ dying, guttural utterance of the titular phrase.

As played by Lo Bianco, Peter represents the sort of everyman that one rarely sees on screen. When, say, Harvey Keitel gives expression to a character’s religious guilt, most memorably in Abel Ferrara’s Bad Lieutenant, the existential thrashings are heightened by his poetic movie-star charisma, but Lo Bianco resembles a cop that you might actually see walking a beat, and he informs Peter’s suffering with a poignant sense of inexpressiveness.

Lo Bianco’s earnestness contrasts with God Told Me To’s wicked punchline: that messiah-centric religiosity is a mask for a cabal of intersex aliens who’re turning privileged (read: white, straight, male, and wealthy) power against its traditional bearers. Peter eventually traces the spree of random citywide killings back to the influence of Bernard Phillips (Richard Lynch), an otherworldly entity who has a vagina near his ribcage and who otherwise resembles a Christ figure, though he dwells, in a key bit of imagery, in the fiery basement of a ratty apartment building that’s clearly supposed to resemble a makeshift hell.

Bernard is one the great images of otherness that American movies have produced, as he’s barely discernable, shrouded in a hideous yellow light that mocks the grace of divine intervention. This “god” that obviously inspired all those people to kill is obviously a fraud…or is he? That’s the despairing satirical vein that Cohen mines with ruthless efficiency.

Perhaps this delicate, gender-mutable entity is God—before a bunch of white dudes perverted its image to benefit their own rigged view of the world. But this isn’t a sentimental revision of the God idea: Bernard’s frighteningly regressive and progressive at once, seemingly simultaneously embodying all of society’s possibilities for damnation and integration. On one hand, Bernard suggests the emergence of a minority-friendly social revolution, and on the other, he appears to be as viciously manipulative as any hate-monger.

God Told Me To is a film of contrasts, most notably between queer and straight, male and female, righteousness and blasphemy, heaven and hell, hope and hopelessness, repression and progression, and law and anarchy. The commonality shared by most of those pairings is the conflict between the chaos of desire and the need, or even the requirement, to contain unruly impulses so as to fit in with a greater community. The film, like It’s Alive, is another of Cohen’s parables of the madness that springs from highly indoctrinated social organization, in this case religion, which drives Peter into a tortuously undefined conflict with himself, leading to his blossoming liberation or insanity, depending on how one wishes to read it. Tellingly, God Told Me To breaks decisively from its procedural narrative halfway through its running time, operating on a free-associative logic that grows progressively more unmooring.

Peter’s identity crisis stands for the larger crisis of a violent city, which stands, in turn, for the crises of a violent country. God Told Me To is one of the key American horror films from the 1970s to mine the sexual, racial quandaries of a nation beset by one great civil rights catastrophe after another. It scans as the horror film’s answer to Sidney Lumet’s Dog Day Afternoon, as well as represents the most purely muscular visual filmmaking of Cohen’s career, as he wields a shaky docudramatic camera to achieve elegantly unhinged images that ground the insane plot in the quotidian details of New York City, particularly the heatwaves that palpably emanate from the vividly rendered neon colors of the street vistas.

The visuals are further intensified by another contrast: Frank Cordell’s lush, despairing Bernard Herrmann-esque score, which pumps the quotidian up with an operatic luridness that reflects back to the story’s pulp roots. God Told Me To is Cohen’s most emotional and ambiguous exploration of his career-long concern with the decay wrought by the constriction of status quo. Watching it, one feels the sensation of looking directly into the maw of a great apocalyptic maelstrom; conventional existence appears to be so precariously invasive, yet extinguishable, and it’s impossible to decide whether that fragility’s promising or ominous.

This image is stunningly detailed, to the point that even cinephiles may be surprised by the visual accomplishment of Larry Cohen’s film. Colors are extraordinarily rich, particularly the reds, blacks, and yellows that play significant roles in the cinematography of the major set pieces. Grain is significantly reduced from prior DVD editions. At times, large swaths of new information are discernable in the frame, which is especially evident in the backgrounds of large crowd sequences. Some softness here and there, but that scans as inherent to the source material. The various sound mixes, most notably the English 7.1 DTS-HD Master Audio track, are lush and nuanced, really allowing the score and immersive sound effects to live and breathe. A revelatory upgrade of a great film.

The audio commentary with Cohen, from 2003, is the major “get” in this package, particularly for fans who’ve never heard it (though it possesses terrific replay appeal). Cohen is one of those industry veterans who can casually and unpretentiously discuss a phone call with a pre-legendary Al Pacino, or his initial attempts to shoot the film with an apparently obstinate Robert Forster in the lead. Plenty of strategies for run-and-gun filmmaking are mentioned, and it’s amazing how polished the film is considering the preponderance of “stolen” shots. The other interviews with Cohen, conducted before screenings of the film, repeat the same material sometimes verbatim (it’s clear that the filmmaker has become an old hat at performing these orations), but they’re fun and will be desirable for the sort of completest nerds who eagerly await a Blue Underground edition of a Larry Cohen film to begin with. Short interviews with actor Tony Lo Bianco and special-effects artist Steve Neill are diverting but inessential. Rounding out the package is an elaborate series of promotional materials, including ads that promote the film under its alternate title, Demon.