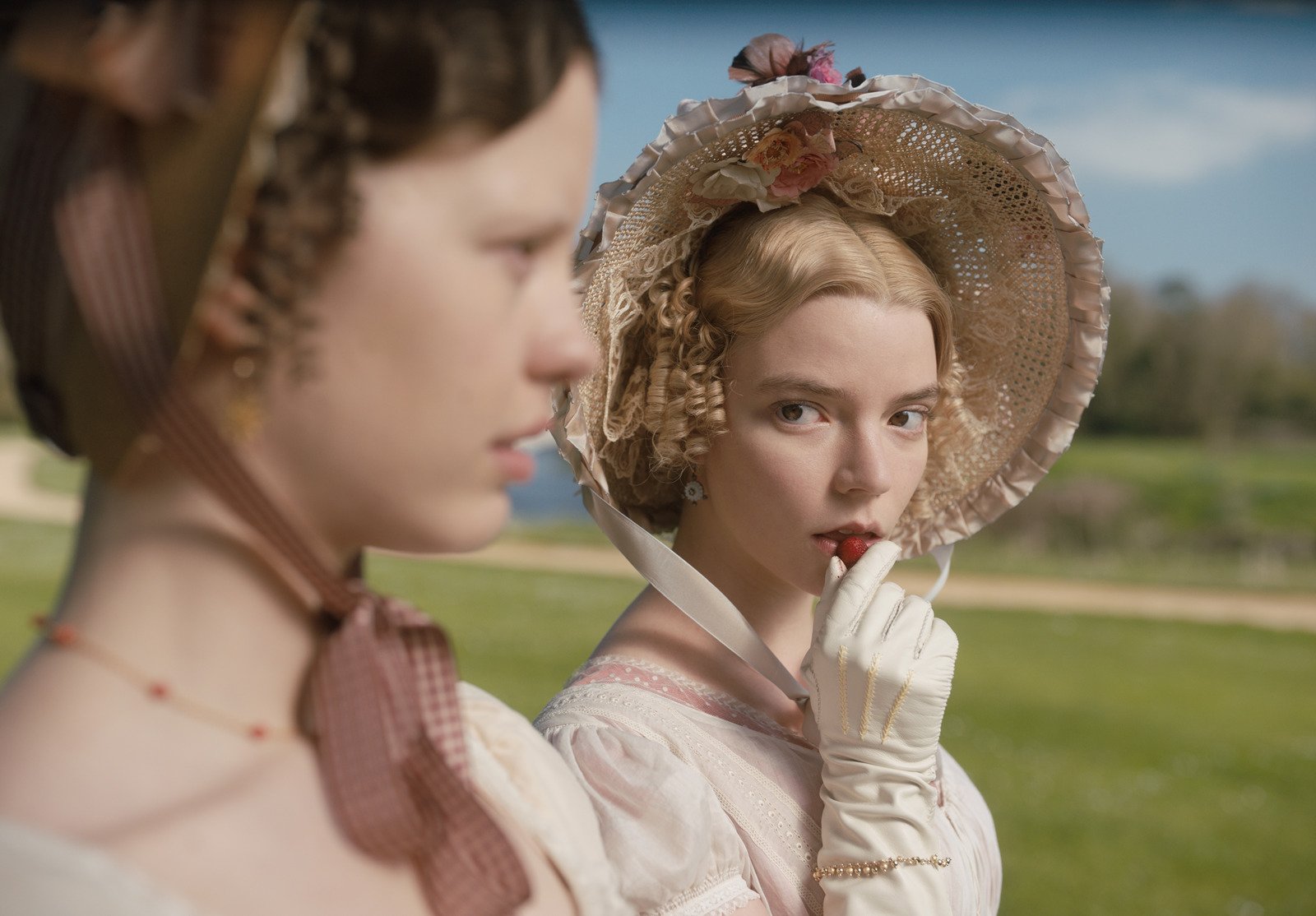 Jane Austen’s Emma concerns the mishaps of a self-assured young country aristocrat who prides herself on her savoir faire but who remains, in the terms a certain modern adaptation, totally clueless. A light comedy neither broad enough to be farce nor pointed enough to be satire, the novel lends itself to interpretation as both, given the narrative’s manifold romantic misunderstandings and host of kooky, idle gentry. Without departing far from the text, director Autumn de Wilde’s lively new film adaptation emphasizes the more farcical elements of Austen’s second-longest novel, granting it a snappy, rhythmic pace.

The eponymous gentlewoman, the story’s only three-dimensional character, is played with impressive depth by Anya Taylor-Joy here. On screen, Emma can seem frivolous right up until the climactic moment that forces her into a self-confrontation, but Taylor-Joy’s open, expressive face, so often in close-up, captures Emma’s creeping uncertainty regarding her powers of judgment, as well as her own feelings, even as she continues to act the social butterfly. She’s aided by a screenplay by Eleanor Catton that doesn’t quite resolve the story’s main fault—its concluding romance counts as perhaps the least convincing of any of Austen’s works—but which preserves much of the complexity of its “handsome, clever, and rich” heroine, who must learn to abide by her judgment rather than her vanity.

Emma begins the film at the height of self-regard, the reigning socialite of the small countryside community of Highbury. The 20-year-old has recently made a match for her governess, Miss Taylor (Gemma Whelan), arranging her marriage—well above her station—to the neighboring widower gentleman Mr. Weston (Rupert Graves). She elects Harriet Smith (Mia Goth), a recently arrived schoolgirl of uncertain origins and inelegant manners, to be her next project. She teaches the naïve girl, enraptured by Emma’s ostentatious wealth and delicate bearing, to present herself as worthy of a genteel suitor, manipulating her into rejecting the proposal of hardy local farmer Mr. Martin (Connor Swindells), and encouraging her to pursue the affections of the young vicar-about-town Mr. Elton (Josh O’Connor) instead.

O’Connor plays Mr. Elton with palpable smarm, wearing a perpetual shit-eating grin above the ridiculous splayed-out collar of an early-19th-century Anglican vicar. Here, as elsewhere, de Wilde communicates much of what remains implicit in the novel (like Mr. Elton’s odiousness) via a tidy mise-en-scène redolent of Wes Anderson. The sterile pastels of the elegant clothing and the precise movements of both the aristocracy and their servants (who hover about in the background like strange automatons) give the film’s sudden eruptions of human neuroses a droll, punchy tone—as when Mr. Elton casually mentions that it may snow, and a dinner party suddenly erupts into chaos, the nervous guests rushing to the carriages to get back home.

It’s in one of those carriages that, in a scene played perhaps a bit too broadly, a slightly drunk Mr. Elton confronts Emma with the revelation that he’s been aiming to court her. Naturally, the news of Mr. Elton’s true affections devastates Harriet, whom Emma very belatedly realizes may have been well suited to Mr. Martin, though at this point Harriet has learned to think of the farmer as beneath her. Outraged at Emma’s tutoring of Harriet in the ways of class presumption is Martin’s landlord, Mr. Knightley (Johnny Flynn), a wealthy Highbury bachelor who, as brother to her brother-in-law, counts as family to Emma and her worry-wart father, Mr. Woodhouse (Bill Nighy). In the lavishly decorated living rooms and salons of their immense estates, Emma and Mr. Knightley bicker in the way that unwitting lovers in Austen tend to, arguing verbosely about the propriety of introducing Harriet to high society.

Emma and Knightley later have occasion to debate the relative virtues of Frank Churchill (Callum Turner) and Jane Fairfax (Amber Anderson), who arrive separately in town under much whispered ballyhoo. The young and handsome Frank seems destined to ask for Emma’s hand; Jane, the orphaned niece of local gossip Miss Bates (Miranda Hart), is rumored to be heartbroken after forming an inappropriate attachment to her adopted sister’s husband. Emma is as flattered by Frank’s attentions as she is jealous of Jane’s level of gentlewomanly accomplishment. Catton and de Wilde extrapolate from the novel’s succession of social scenarios to make Emma’s doubt about the shifting social field more comically apparent: One of the funniest scenes has the ostensibly modest Jane follow up Emma’s dilettantish performance on the pianoforte with a beautiful, complex sonata, in front of the whole town.

Emma’s discomfort in her new situation will come to a head when she, with Frank’s encouragement, grossly abuses her privilege as a gentlewoman with a practiced wit, embarrassing herself and wounding an old friend. Emma is interested in such textures of early-19th-century society, if not in the latter’s pace. The film fits so much of Austen’s narrative in by judiciously condensing scenes to suit its more ironic tone, occasionally using transitional smash cuts to get right to the point. The result is a stylish, eminently watchable farce that, despite its old-England trappings, is every bit an update as it is an adaptation.

Review: The Trouble with Being Born Is a Chilly Rumination on Memory