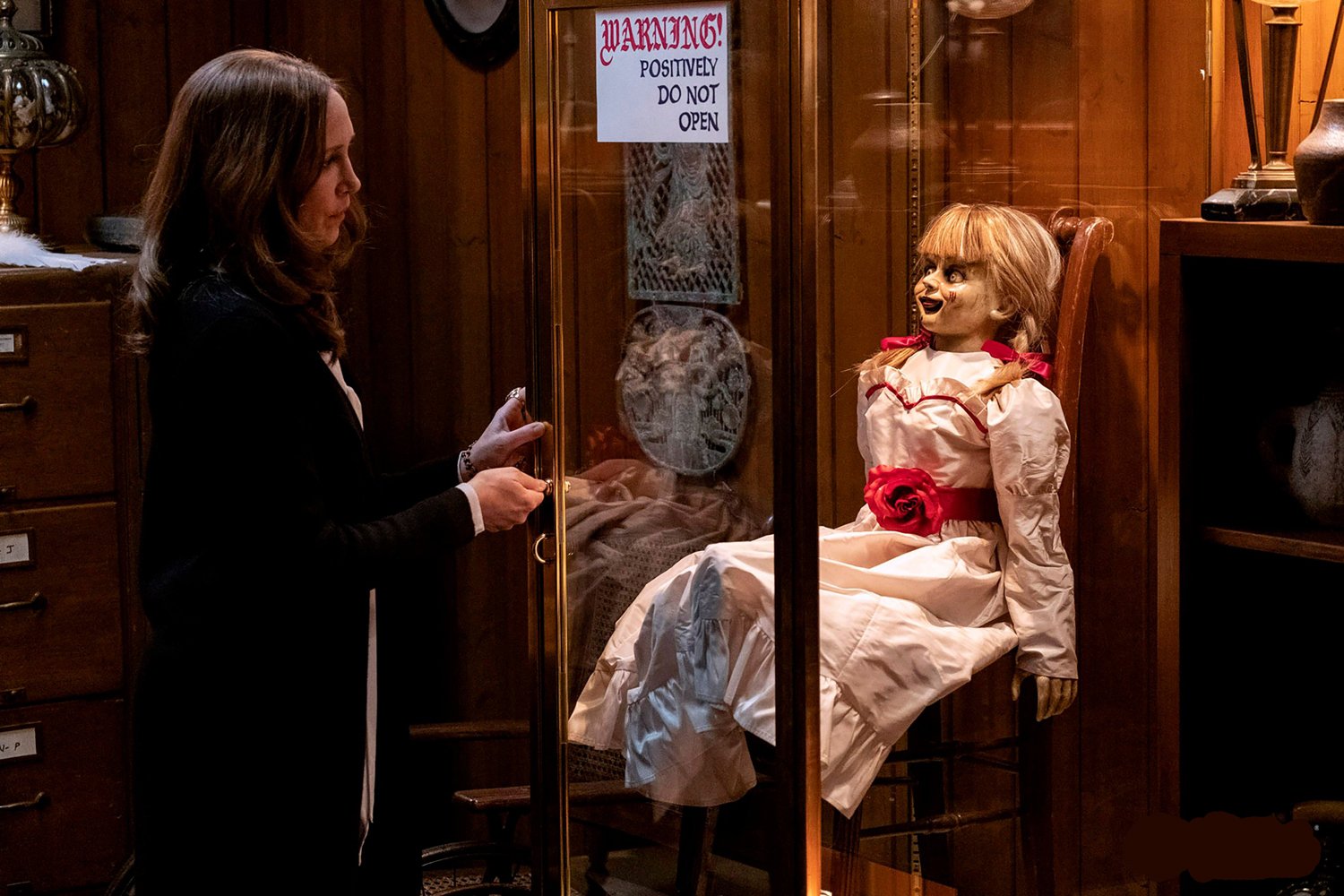 The Conjuring Universe suggests the rural cousin to Disney’s Marvel Cinematic Universe. Though the latter is breezy, bright, and flippantly secular and the former is heavy, dark, and noticeably Christian, the genetic link between them is unmistakable. Both have succeeded by streamlining a popular genre in the extreme, subordinating writerly or directorial personality to the tone and narrative trajectory of the whole; both have concocted a palatable, PG-13 version of their genre’s inherent violence that’s neither offensive nor impressive; and part of the appeal of each universe is the way the films are connected by a network of allusive Easter eggs designed to create that satisfying in-group feeling.

Watching Annabelle Comes Home, the third title in the Annabelle series and the seventh in the Conjuring Universe, one sees that this cinematic universe and the MCU are also coming to share a tone of self-parodic humor. The film knows you know what its mechanisms are. When psychic paranormal investigator Lorraine Warren (Vera Farmiga), in the first real scene of suspense, holds up a road map and obscures the camera’s view of the graveyard outside her car’s passenger window, Annabelle Comes Home takes the opportunity to wink at its fans. Obscured parts of the frame obviously spell danger, and therefore the reveal is a joke rather than a genuine scare—a reversal that happens so often across the film’s early stretches that it becomes as tiresome as Tony Stark making a crack about a flamboyant superhero costume.

In the film’s prologue, Lorraine and her husband, Ed (Patrick Wilson), who as the connecting thread of the Conjuring films are kind of its version of Marvel’s S.H.I.E.L.D., have recovered the malicious titular doll from whatever family she was most recently haunting. Annabelle the doll is, as Lorraine helpfully explains in the film’s opening shot, not possessed, but is rather a conduit for the demon who follows her around. Later, Lorraine will revise her expert opinion and describe Annabelle as a beacon for evil. That the film never feels the need to specify or reconcile the meaning of “conduit” and “beacon” in this context suits the general incoherence of the series’s mythology, based as it is in the Warrens’ scattershot pronouncements.

Annabelle Comes Home ties together a disparate set of unsettling phenomena using the single, paper-thin premise that demon-conduit Annabelle is also a demon-beacon. After Wilson and Farmiga have delivered their universe-consolidating cameo, their pre-teen daughter, Judy (McKenna Grace), her babysitter, Mary Ellen (Madison Iseman), and the latter’s friend, Daniela (Katie Sarife), are left alone in the Warrens’ home. The married paranormal investigators have stashed Annabelle in their storeroom of assorted mystical curios, all brought to demonic life when Daniela—so inquisitive, mischievous, sexually adventurous, and so forth—lets the doll out of her glass case of honor/imprisonment.

The series is still gore-lessly devoted to making us jump by following moments of extended silence with sudden cacophony, but with all its noisy phantoms from the beyond, Annabelle Comes Home is undeniably silly, a monster team-up movie that often feels like a harmless game of dress-up. An undead bride bearing a kitchen knife, a Charon-esque ghost come to ferry people to hell, a monstrous hound from Essex, a TV that foretells the future, a haunted suit of samurai armor, and Annabelle herself comprise the ragtag team that (rather ineffectively) hunts the three teen girls now trapped in Warren’s house. The scares, untethered to any deeper concept or theme, are more akin to friendly pranks than they are to distressing events, as if the monsters were friends jumping from around corners in rubber masks.

Annabelle Comes Home is a series of scenes that all follow the same structure: One of the girls finds herself alone in a space and doesn’t notice the malevolent presence in the room until well after the audience does. It’s then that she screams in horror and the film smash cuts to a different room where the same scenario is playing out with a different girl. There’s a certain game-like quality to predicting the precise moment the scare will pop up in each scene, but it’s a formula that, after a few repetitions, no longer holds much tension. Gary Dauberman’s film is a carnival ride of cheap thrills, at least as likely to elicit laughs as shrieks—there can only be so many slow-zooms on Annabelle’s blue-gray face before the doll becomes funnier than she is creepy—and certainly unlikely to leave a lasting impression.

Review: Ophelia Fails to Transform a Victim into a Girl-Power Icon