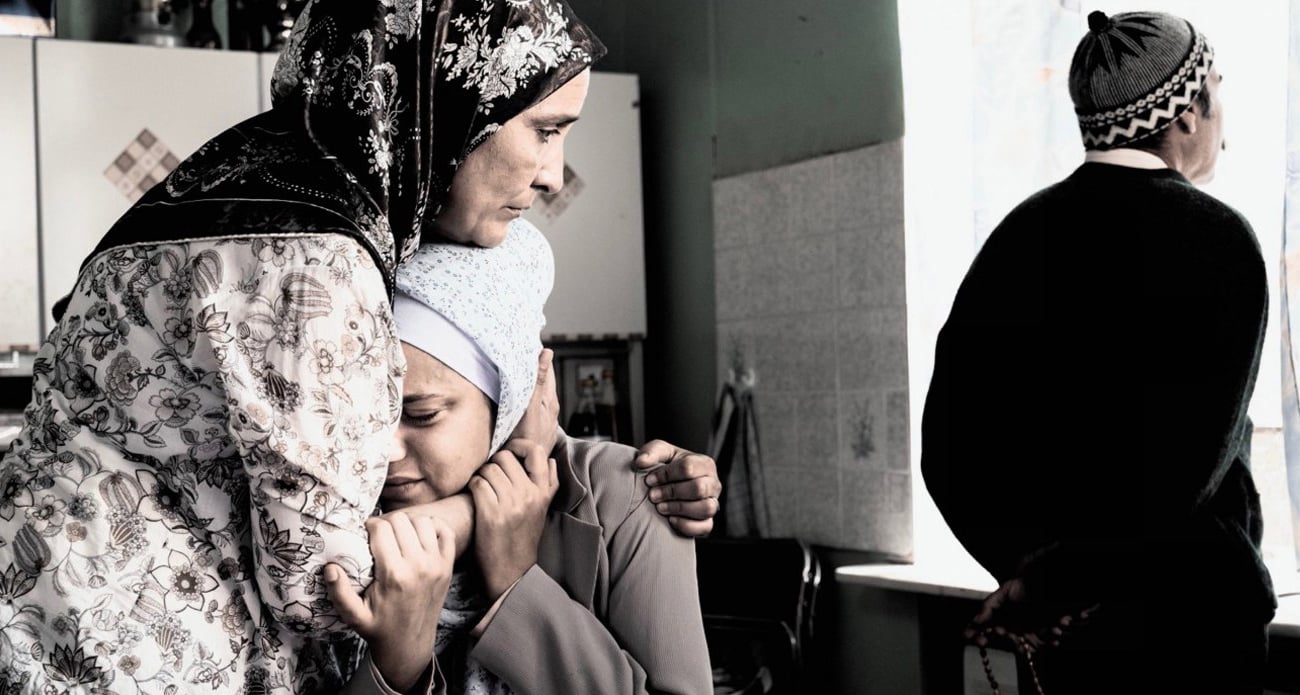 At first, A Regular Woman suggests it’s incapable of surprise. It’s narrated by its literally lifeless heroine, already a murder victim when the film begins, and is another take on a true-crime tale recounted several times before, notably by Austrian filmmaker Feo Aladag’s fictionalized 2010 drama When We Leave. Yet director Sherry Hormann steers into unexplored territory, partly with her stylistic choices, but also by switching to a secondary protagonist after the first one is left dead on a Berlin sidewalk.

That is, left dead for a second time. “That’s me,” says Aynur (Almila Bagriacik) in voiceover during the film’s opening sequence, referring to a corpse under a tarp. Then A Regular Woman rewinds to the moment when Aynur’s father withdrew her at age 16 from her Kreuzberg school and sent her to Turkey to marry a cousin. Commenting from seven years into the future, the reluctant bride calls her marriage a “change of owner.”

This is the biography, fictionalized in places, of Hatun “Aynur” Sürücü. In 2005, the German-born 23-year-old was fatally shot at a bus stop by the youngest of her four brothers, one of nine children in a family of Turkish-Kurdish origin. Aynur had disgraced her family—or so some of her siblings apparently thought—by leaving her husband, declining to cover her hair with a headscarf, having a German boyfriend, and living solo with her young son, Can.

In this telling, Aynur returns to Germany when she’s about to give birth to her child, fleeing a husband who hit her. She tries to live with her disapproving family, but soon turns to German social-service agencies for sanctuary. Once on her own, Aynur makes non-Muslim friends, goes out dancing, removes her headscarf, and begins training as an electrician. She also becomes intimate with Tim (Jacob Matschenz), a nice guy who aces the audition to become Can’s stepfather. But his presence leads to harassing phone calls from Aynur’s brothers, who call her a “whore.” What happens next is a matter of public record.

With an acridly ironic (and fictitious) shock ending, When We Leave made a conspicuous bid for a strong visceral response from audiences. Hormann, a German who was born in the U.S., takes a less sensational approach. She flags cinematic artifice by inserting real-life photos and video of Aynur, her boyfriend, and some of her kin. She also employs an artificial color scheme that simulates hand-tinted black and white, and cracks the fourth wall with on-screen footnotes to some of the events and characters. The effect is to emphasize the film’s emotional distance, a quality that parallels Aynur’s detached narration of her life and death.

Florian Oeller’s script supposes that the slaying was encouraged by an extremist Berlin imam, an aspect of the case that wasn’t proved during multiple trials. (The shooter served nine years, and two of his brothers were twice acquitted of assisting him.) But A Regular Woman also develops the character of the one brother who fled the family, moving to Hamburg and encouraging Aynur to follow him. Another family altogether enters in the final scenes, which give the film a crackling energy most of it lacks. As he prepares to kill his sister, Nuri (Rauand Taleb) also courts Evin (Lara Aylin Winkler), a teenager from a more assimilated Turkish-German family. The young woman serves as our surrogate as she, first fascinated and then repulsed, is pulled into the conflict between Aynur and her brothers.

While Bagriacik makes Aynur believable and sympathetic, it’s the sequence that centers on Evin that lifts the film above the realm of solid but dutiful docudrama. For much of its running time, A Regular Woman notably sticks closer to the facts than When We Leave. Where that film built to simple outage, this one concludes with a rush of complex, conflicting emotions.

Review: John Swab’s Run with the Hunted Is Captive to Suspect Morality

Review: Olivier Assayas’s Wasp Network Is a Political Thriller in Search of Thrills