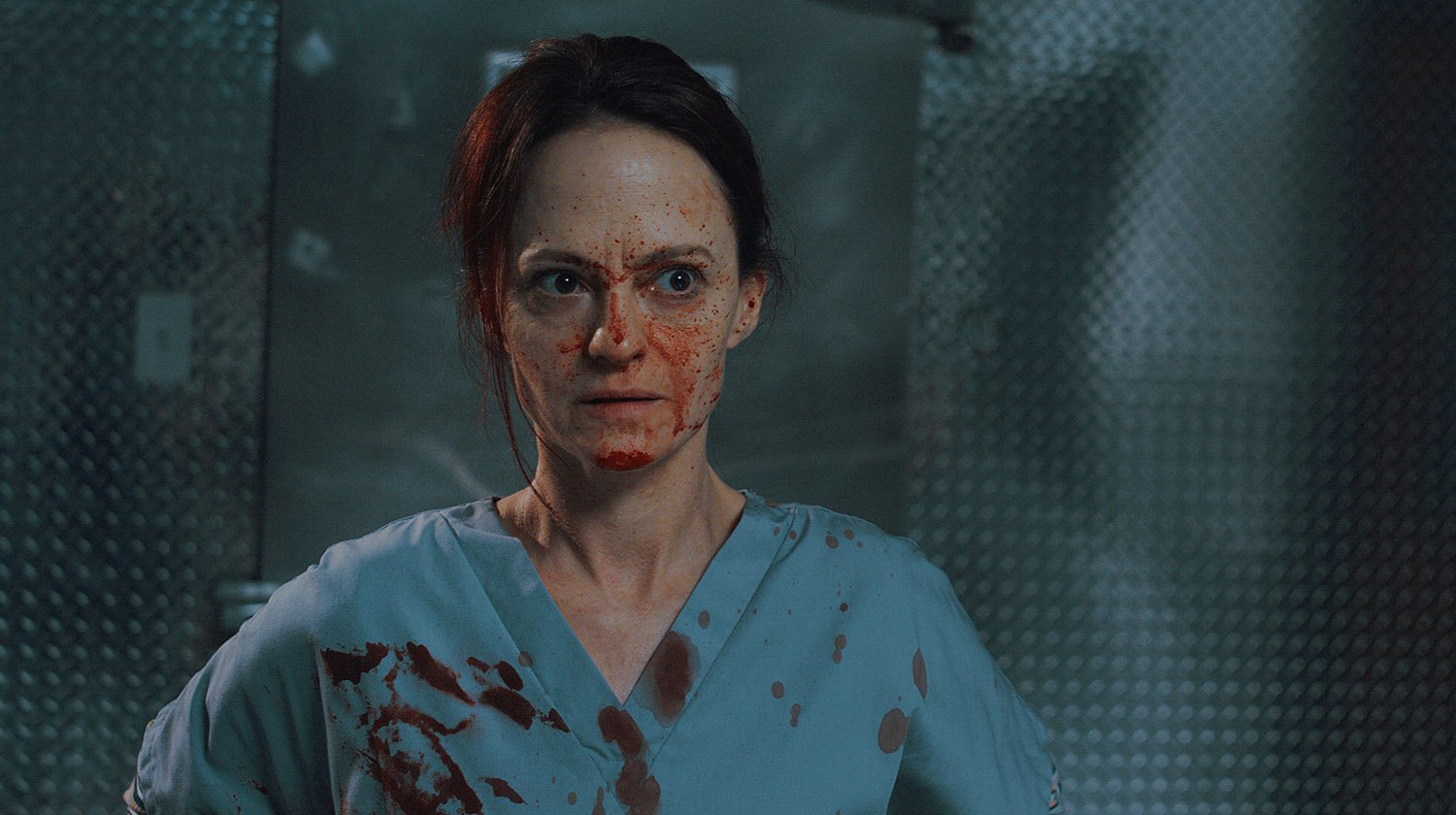 Writer-director Brea Grant’s 12 Hour Shift ends, neatly and pointedly, as it begins: in a hospital parking lot, with a cold, hard acknowledgement of a brutal workday’s toll on a person. In the opening scene, Nurse Mandy’s (Angela Bettis) world-weary face suggests a lifetime of sleepless nights, and as she takes drags from a cigarette that’s clearly her lifeline to sanity, she visibly endures her co-worker Cathy’s (Julianne Dowler) small talk about a day she’d like to forget, before then telling her to fuck off after the woman’s pleasantries give way to presumptions about Mandy’s weight and how she’s getting by.

The film’s bookend scenes represent the closest thing to a break that Mandy enjoys during her double shift. Unfortunately, they’re also our only breathers from a story that’s so driven by the necessities of plot that it makes scant room for characterization. Indeed, that opening scene is one of few here where the audience gets to really sit with the characters and their feelings, to think of them as actual people. Its richness is such that when we learn that Mandy runs an organ-stealing operation out of the hospital where she works, and that Cathy’s presumptions about Mandy weren’t so wild, Mandy’s brusqueness toward her co-worker still feels justified.

Bettis makes you believe right out of the gate that Mandy, regardless of how she gets by, has earned her right to tell Cathy to mind her own fucking business. Otherwise, 12 Hour Shift reduces Mandy, and everyone else who comes into her orbit, to a cog in its plot’s wheels. You believe that the character has to snort pills in order to get through a shift (shades of Nurse Jackie), but you may wish for an inkling that she once cared about her patients beyond their capacity to supply her with organs. She’s kind, yes, to one dialysis patient (Ted Ferguson), but it’s hard to shake the impression that the old man only exists to get swept up in the bloody free-for-all that ensues after a kidney intended for a group of gangsters goes missing.

Mandy and her flighty but resourceful half-cousin co-conspirator, Regina (Chloe Farnworth), get into it at various points across 12 Hour Shift’s 86-minute running time, and in a way that suggests that their illicit conduct was an inevitable result of their social position. But Grant also doesn’t convey a palpable sense of place—of the hospital being located somewhere else other than a nondescript Anywheresville—and as such the characters’ pitilessness is never fully contextualized. The film was shot in Jonesboro, Arkansas, but its characters and their accents are such that you’d think that it takes place no further east of Pomona.

Of course, 12 Hour Shift isn’t in the verisimilitude game. The plot, geared as much for comedy as horror, is wound with efficient build-up, and its revolving-door atmosphere is consistent enough to paper over some iffy acting, baggy dialogue, and more than a few minutes of wasted real estate, such as an anemic bit in which the hospital’s head nurse, Karen (Nikea Gamby-Turner), recoils in disgust as she eats whatever it is she decided to lunch on that day.

The film’s highlight is a scene in which an incompetent police officer (Kit Williamson) walks in on Mandy removing a kidney from a dead patient and being unable to process the legitimacy of her actions. The moment is mischievous for the way that Officer Myers tries to square his understanding of Mandy’s profession with her blood-splattered face and clothes, while she walks the razor’s edge between professional calm and murderous rage, trying not to comprise her organ-stealing racket. The close-quarters framing so perfectly intensifies the uneasy, blackly comic energy of the scene that one wishes that the rest of the film wasn’t rife with the shorthand and didn’t have the look and pacing of a multi-camera sitcom.