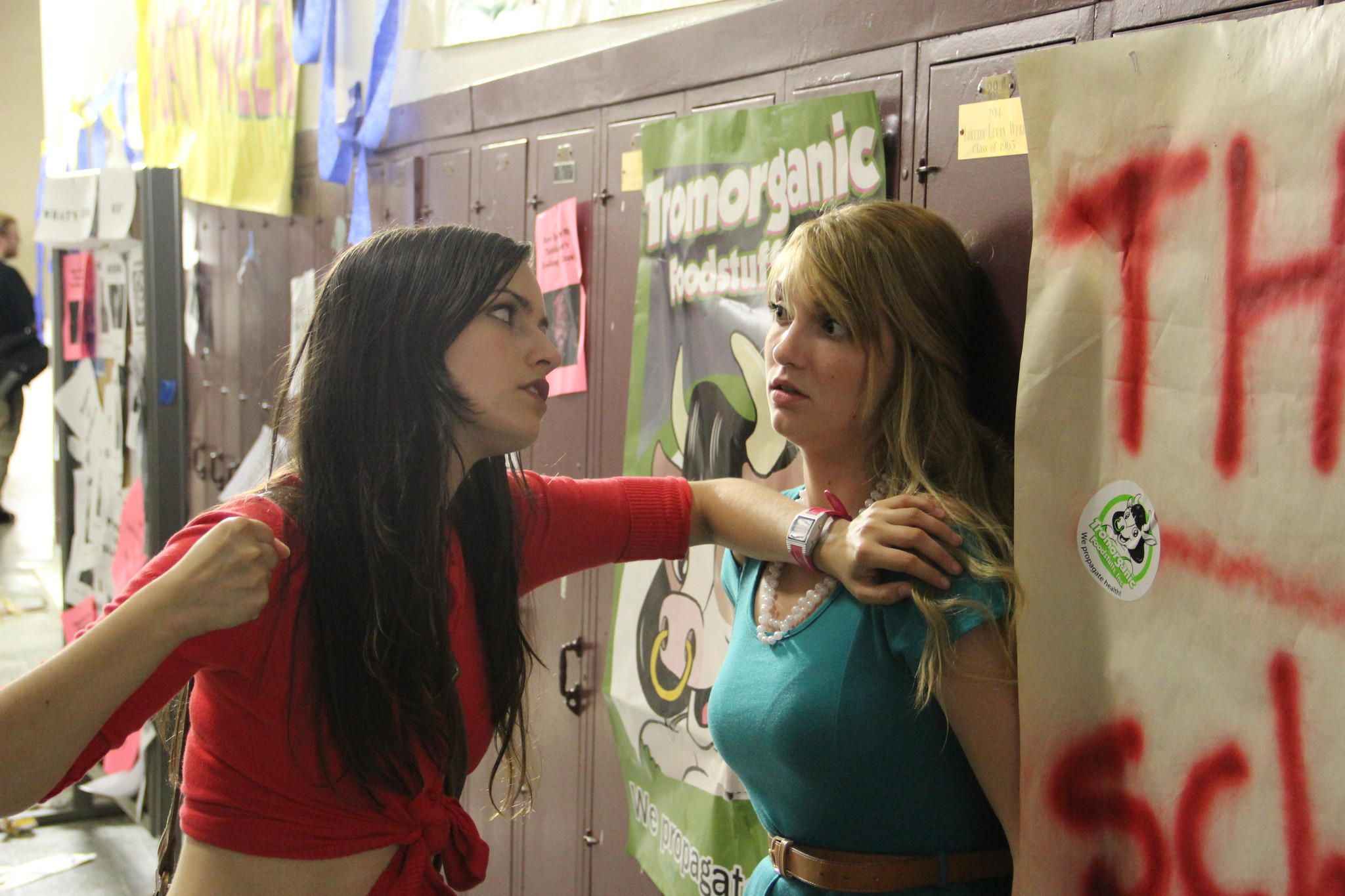 As a pioneer of the “so-bad-it’s-good” exploitation subgenre, Lloyd Kaufman has earned his little corner in the annals of film history. Nobody ruled the ‘80s home-video craze quite like his and Michael Herz’s Troma Entertainment, the bastard offspring of American International Pictures responsible for genre “classics” like The Toxic Avenger and other schlocky video nasties that reveled in sex, gore, and vulgar humor. Kaufman inspired a cult following, but like all eccentrics who’ve realized people find them eccentric, he’s since devolved into self-parody. Case in point: Return to Nuke ‘Em High Volume 1, an obvious riff on Troma lore that masquerades as a self-referential passion piece.

The film, more of a revisit than a sequel to or reboot of Class of Nuke ‘Em High, returns to Tromaville High School, where the nearby nuclear power plant that caused so much trouble the first time around has been replaced by a crooked foodstuffs distributor that provides the students with contaminated lunch. On an ill-fated Taco Tuesday, the resident glee club consumes some particularly nasty grub and is subsequently transformed into a vicious clan of cretins, a la the original. It’s up to a pair of buxom lesbian lovers (Asta Paredes and Catherine Corcoran) to save the day, though the plot remains decidedly unresolved in order to save room for the forthcoming Volume 2. (Kaufman arbitrarily cites the Kill Bill series as inspiration.)

Because it actively defies and outright ridicules all notions of aesthetic intent, proper form, and moral propriety, Return to Nuke ‘Em High Volume 1 is essentially impervious to standard critical evaluation. It’s a bad film, no question, but simply calling it a “bad film” doesn’t really serve a larger point. Despite the fact that it’s shoddily made (the digital cinematography resembles a YouTube video in mid buffer), frequently unfunny (numerous dick and fart jokes abound), lazily, if broadly, satirical (simplistic jabs are taken at such zeitgeisty subjects as Obamacare, Instagram, bath salts, and gun control), and just plain crude, Kaufman would likely wear any negative assessment like a badge of honor. Such is his want, after all.

Return to Nuke ‘Em High Volume 1’s most undesirable quality isn’t its lack of, well, quality, but its dullness. The incessantly manufactured sleaze quickly wears its welcome, the product of Kaufman idly reaching for the most offensive jokes and scenarios conceivable without giving a second thought to imagination—his or the audience’s. About the only thing the film does well is reference previous Troma titles. In harkening back to his earlier efforts, Kaufman reminds us that Troma was once a reliable source of respectable (relatively speaking) exploitation fare, a far cry from whoever’s responsible for this half-assed Z-film pastiche.

Review: The Truth About Emanuel