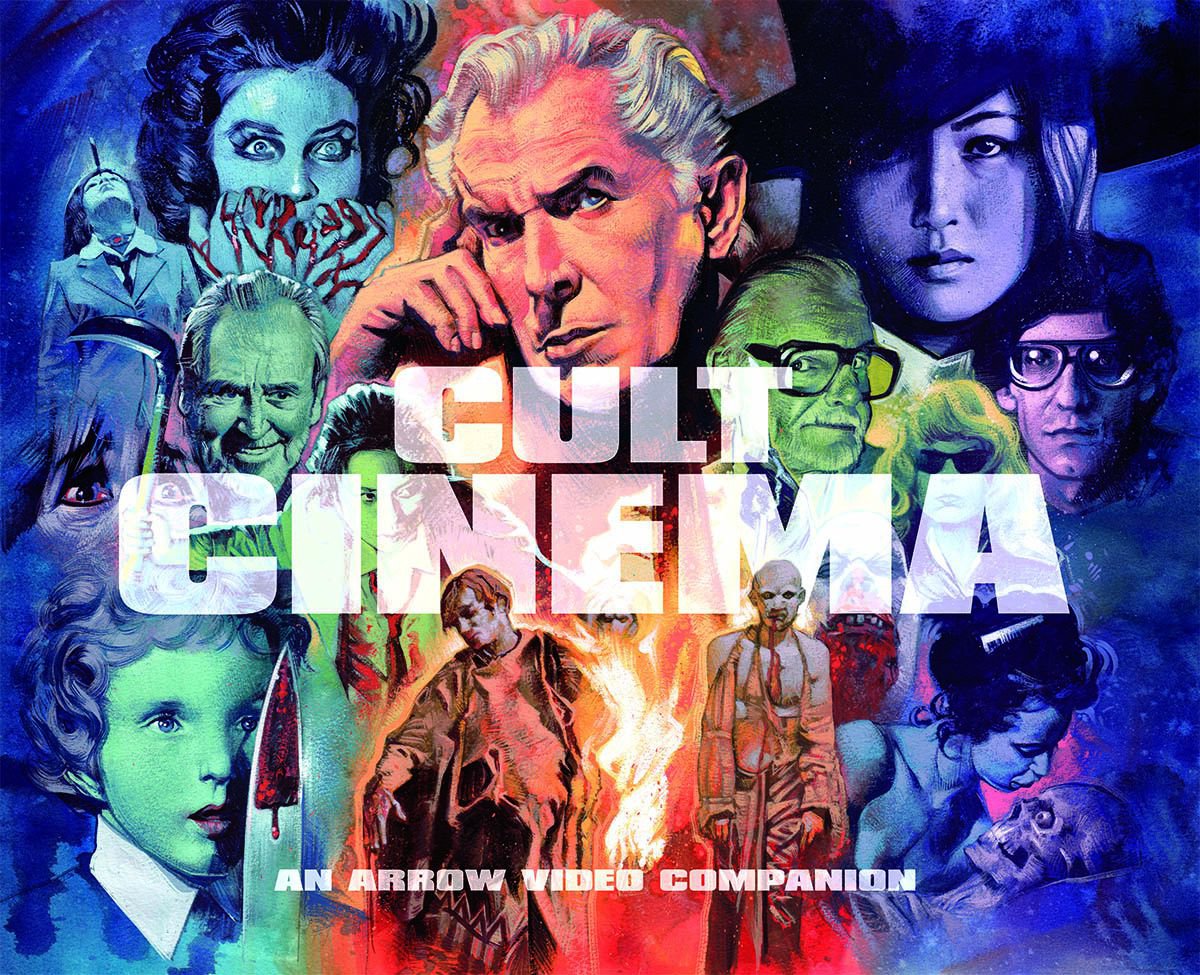 A figure named Death dressed in black standing in front of the sea. A woman shot through her glasses with blood pouring down her face. A man huffing gas while stroking a garment made of blue velvet. These images—all iconic moments from watershed films—first presented themselves to me during my adolescence as I intensely perused a 1999 volume titled Entertainment Weekly’s 100 Greatest Movies of All Time. Most cinephiles surely have a comparable story, a moment when the local multiplex started to take a backseat to the larger scope of a cinematic past that seemed far more mysterious than anything Anakin Skywalker and the gang were getting into.

With Cult Cinema: An Arrow Video Companion, the U.K.-based Arrow Video makes their bid for historical taste-making by providing budding film fans and hardened vets alike with a collection of essays, edited by Anthony Nield, that provides an overview of what could be meant by “cult cinema.” Those seeking academic material should look elsewhere, namely The Cult Film Reader, which theorizes a definition of “cult” across numerous philosophical methods of inquiry. Cult Cinema, on the other hand, is part brand promotion, part coffee-table tome, part graphic novel, the three strains of which combine to create an effective, albeit limited, scope of prominent figures and film titles within a largely Eurocentric compendium of cinematic titillations, generally encompassing eroticism or disgust (and, in most cases, some degree of both).

Organized into five units, the book provides a series of brief essays, several of which have been reprinted from the booklets included in prior home-video releases from the studio. In fact, every essay in “Cult Movies,” the book’s first section, comes from an Arrow release, though that’s notable only insofar as it reflects the collection’s general reliance on recycled materials. The essays themselves are top-notch and cover a welcome variety of titles, from giallo (Deep Red) to Hollywood-produced satire (The ‘Burbs) to violent allegory (Battle Royale). Though no author addresses this range of films (the collection has an “introduction” from director Ben Wheatley that amounts to a brief reflection on his introduction to a number of cult films), Nield’s selection of seven essays hits diverse points and demonstrates the collection’s interest in sampling from a number of sources to identify cult materials.

Six essays on directors comprise the next unit and, like the previous one, there are some prominent, canonical names (David Cronenberg, George A. Romero) alongside genuine members of the underground (Tinto Brass, Lloyd Kaufman). Perhaps the best essay is on Wes Craven (coincidentally, not previously released with an Arrow disc), where writer Mike Sutton argues for Craven’s reputation hanging on “four iconic horror films,” which he proceeds to detail alongside Craven’s less notable fare like Deadly Blessing, though even here Sutton acknowledges how Craven’s cinema tends to be “more interested in the social context” than the “predictable genre stuff.” Boasting stills from many titles, including several from the films of Seijun Suzuki and much NSFW material from Brass, the collection suggests a cult director can take many shapes and work across industries and national cinemas.

Regarding national cinemas, each section skews heavily toward filmmakers from either Europe or the United States, though other countries are not wholly absent. Actress Meiko Kaji, of Stray Cat Rock fame, and Brazil’s exploitation cycle known as Pornochanchada receive entries, though the latter is rather brief at just three pages. Compare that to the six-page essay on Dressed to Kill from the first section, and the amount of attention reveals some of Arrow’s interest in hyping certain titles and directors with twice the copy as an entire, nearly decade-long cycle of films.

While such brief treatment of non-Western cult cinemas is an unfortunate slight, the remaining material proves compelling, including a few delightful entries on giallo films, Canuxploitation (low budget Canadian films of the late ‘70s and early ‘80s), and Christmas-themed horror, the latter being an essay taken from Arrow’s release of Christmas Evil. Kim Newman’s summation of the subgenre emphasizes how A Christmas Carol, though a beloved holiday classic, “is responsible for the association of Yuletide with ghosts and the gruesome.” For Newman, this thread winds through most holiday-themed horror, but especially Christmas iterations, which by the time of 1984’s Don’t Open Until Christmas have become “excessive[ly] anti-Santa.”

The book’s final section on distribution models is perhaps its most resolutely historical, but it’s also the strongest, primarily because three of the five essays have been written exclusively for this collection. Accordingly, there’s a comprehensiveness here that’s lacking and more disjointed in other sections. A bang-up opener by Robin Bougie on the “early days of cult cinema” recalls Joe Bob Briggs’s book Profoundly Disturbing for its mix of fact-based credibility and canny references to films high and low. Moreover, Bougie peppers in mentions of nearly 50 titles in just six pages of text, making this a must-read for anyone looking to master the origins of a cult sensibility. It’s also, like the entire book, beautifully composed, with clearly printed film stills, colorful posters, and a large font for easy reading. While the book is unlikely to surprise anyone who already knows the significance of Pam Grier, Arrow’s vibrant rendering of several cult-cinema high points should seize the guts and genitals of youngins who don’t.