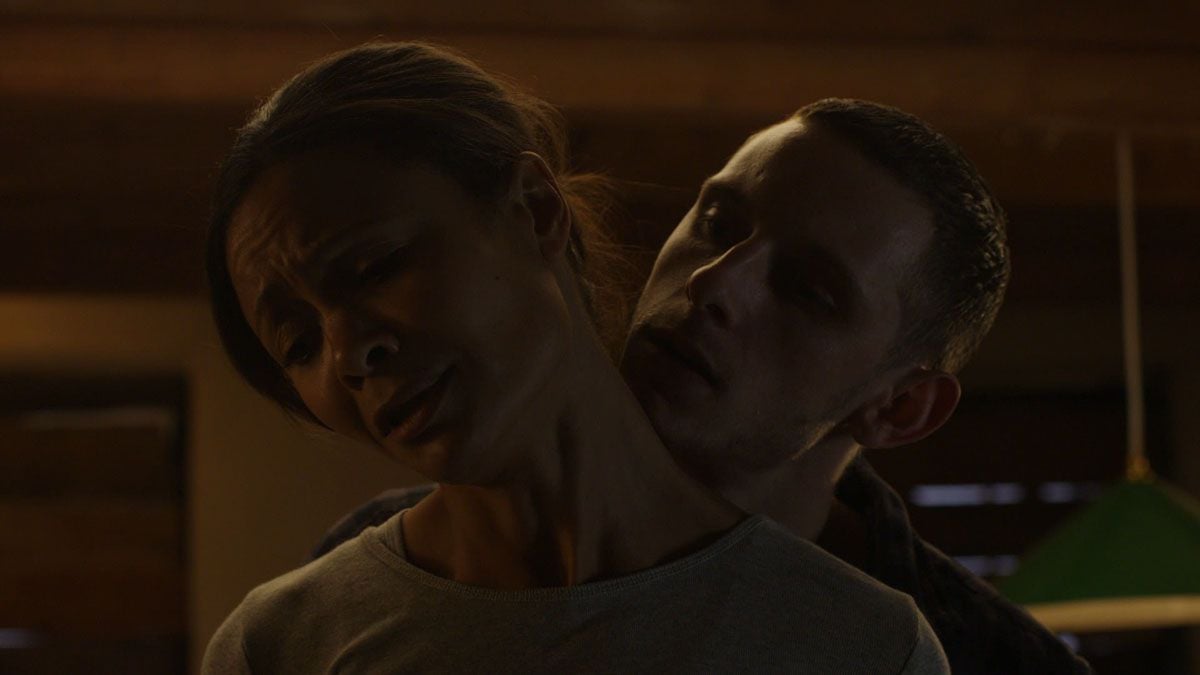 “It always happens in the same place,” says the caretaker of a bucolic cottage on an uninhabited island off the coast of Scotland where Martin (Cillian Murphy) and Kate (Thandie Newton) are about to spend several extremely unpleasant days; while the couple is ferried across the way, Martin’s phone loses service. This is director Carl Tibbetts’s way of letting us know that, already and for the rest of his film, we’ve passed the point of no return. Once the unhappy couple arrive on the island, their only means if communication with the caretaker—or anyone else for that matter, though their cellphone signal is limited and often gone altogether—is via CB radio. Though this would normally be ideal for a husband and wife looking to get away from it all, we very quickly get the sense that this is no honeymoon. Both are miserable for similar reasons, but neither is willing or able to reach out to the other in the hopes of resolving their differences. They’re so distant from one another, in fact, that when a man with a head injury (Jamie Bell) washes up on shore, it almost seems a relief.

Situated somewhere between the home-invasion nightmare of Funny Games and the haven of 28 Days Later’s final setting, this is a closed system of a film that effectively balances the fear of the unknown beyond the comfort of one’s home with the creeping suspicion that what lies within it is no less suspect. Jack warns of danger—a fatal and highly contagious disease sweeping across continental Europe, in fact—from without, but the cottage is already so divided from within that it almost seems an afterthought. What’s more, the aggressive interloper hasn’t a shed of proof to substantiate his claims. Retreat’s greatest feat is its ability to not only suspend our disbelief, but also bring it into question: We’re given no sight of the outside world and thus are as unsure of the truth of Jack’s story as are his hosts/hostages. But the play-acting the three of them must necessarily involve themselves in to further not only this film’s narrative arc but also their own chances of survival at times descends into one-note blandness. Retreat’s wheels are constantly spinning, but they’re not always taking us anywhere. This is made especially unfortunate by how much promise the premise holds; it often feels like an intriguing idea that never fully takes off.

What briefly emerges out of this constant air of uncertainty and violence is a pre- (or, if you believe Jack) post-apocalyptic inversion of the nuclear family. Each character vacillates between the role of parent and child at one point, with the immediate metamorphosis of Jack, whom Kate takes out of the cold and into her and Martin’s home, from wounded child to domineering father being by far the most threatening role reversal. The three are left alone with each other, but the presence of two others to whom they either should or must trust and be close to only amplifies the individual loneliness of all three. Jack’s presence is ultimately the spark by which Martin and Kate come back to one another, however; they’re finally united against a common enemy. Bell is a talented actor, and his character embodies some genuinely fascinating notions, but Jack’s monomania tends to distract from and subsume the compellingly dysfunctional dynamic at the heart of Retreat rather than enhance it. It’s a shame, really, since these competing forces, working in harmony, could have made for an exceptional film rather than an almost-there misfire. When finally one of Jack’s captives attempt to turn things in one definitive direction, it’s too little, too late—for them and for us.