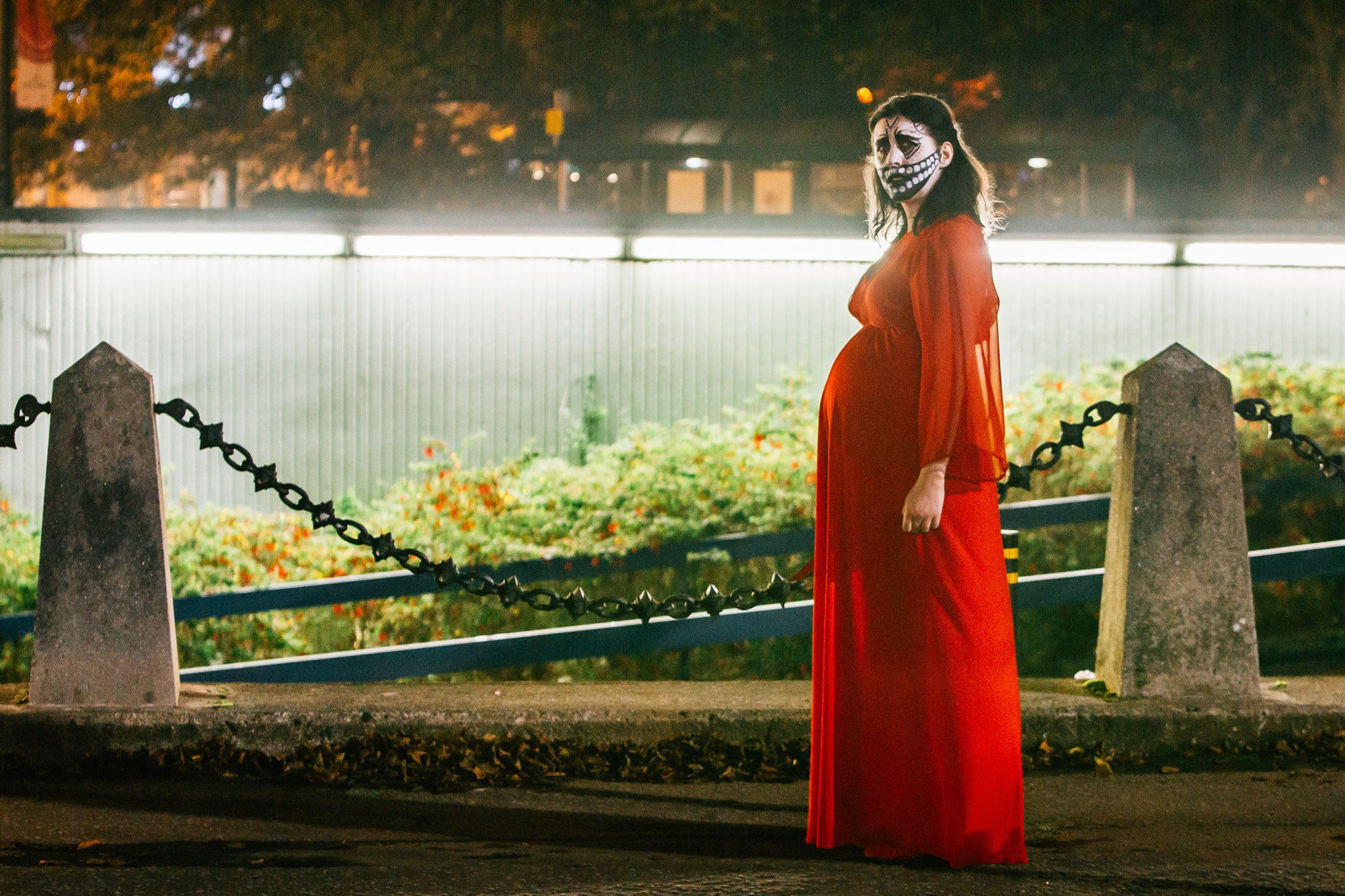 Like death, pregnancy is a topic that can allow awkward platitudes to gum up conversations. There’s a tendency to regard a pregnant woman as an Other of sorts, particularly by those who’re firmly disinterested in having children. Pregnant women, of course, can often sense these emotional vibrations, feeling isolated, patronized, de-sexed, and de-individualized, and Alice Lowe’s Prevenge seizes on these cultural discomforts with sporadic ferocity.

Lowe has fashioned a one-joke film, but it’s a good joke: An expectant mother, Ruth (Lowe), is driven to kill those she feels to be tangentially responsible for her looming single parenthood, rendering her pregnancy a campaign of carnage and resentment. Lowe strips the notion of pregnancy of all hope and encouragement, focusing on its alienating properties with the sort of single-minded emphasis normally reserved for its life-affirming qualities, namely the creation of another human being, as well as the fostering of a new family.

Ruth, though, doesn’t have a family, as it’s just her and her unborn daughter, who’s driving her insane. The father of Ruth’s child died before the start of the film’s narrative, under mysterious circumstances, fostering in Ruth an ironic resentment of the classic domestic arrangement. At times, Prevenge brings to mind the films of Larry Cohen, particularly the It’s Alive series, in its lively and casual detonation of the sanctity of nuclear-familial culture. The film’s visceral sense of comically ultraviolent estrangement is also reminiscent of the Lowe-starring Sightseers, which the filmmaker also co-wrote.

Prevenge is a collection of murder sketches, in which various taboos pertaining to gender and power are ruptured. Early in the film, Ruth goes to a bar that’s hosting a cheesy 1970s/1980s dance-party night. She hits on DJ Dan (Tom Davis), and the two engage in hilariously debauched banter that displays a knowingness of single life as practiced by those—of both genders—who’re aging and have been alone too long. The details that Lowe proffers are merciless and deliberately clichéd, reflecting a culture’s worst, most reductive and purposefully conditioned fears of solitude in on itself. Dan sizes Ruth up, mistaking her pregnancy for fatness, and is openly unimpressed with what he sees. On Ruth’s tab, Dan buys drinks for other, younger women, which Ruth tolerates because she’s literally softening him up for the kill. At his house, which he shares with his mother (natch), Dan says that Ruth bears more of a resemblance to Elton John than Olivia-Newton John, and Ruth surveys the hairy, overweight Dan and unshakably replies “glass houses.”

A more haunting scene homes in on inter-female resentment, when an executive, Ella (Kate Dickie), won’t hire Ruth because she’s pregnant, insisting that she should settle her own business before meddling in the business of others. This sentiment is disturbing for its blunt encapsulation of what some people think of maternal leave: that women maybe shouldn’t be paid to stay home and tend to their personal lives. This bitterness might be most urgently felt by someone like Ella, a lonely woman who’s attained success by making female-centric sacrifices. Lowe’s daringly empathetic to this argument, as Ruth’s murder spree is a satirical exaggeration of the self-absorption that bystanders might perceive in prospective mothers and subsequently resent. Ruth is blinded by her pregnancy and heartbreak, unable to process the vulnerabilities of the lives she destroys. (Correspondingly, the film’s sound design is replete with soothing yet isolating sounds of flowing fluid, suggesting Ruth’s imagining of her womb’s interior.)

Ultimately, Prevenge doesn’t emotionally and conceptually blossom like Sightseers, which revealed a surprising undertow of wounded romanticism to be lurking underneath its nihilism. Lowe doesn’t entirely trust her joke, as she explains Ruth’s insanity with a backstory that dulls the film’s craziness. (One can’t help but wish that the child were actually ordering Ruth to kill from within the womb—a great, irrational idea that Cohen would’ve surely run with.) There’s a beautifully unsettling image, late in the film, of Ruth dressed in a flowing red gown as an angel of death, though Prevenge has devolved by this point into standard stalker fare. But Lowe skillfully evinces two of a horror director’s greatest assets: a knack for locating society’s most awkward pressure points, and a willingness to punch them.