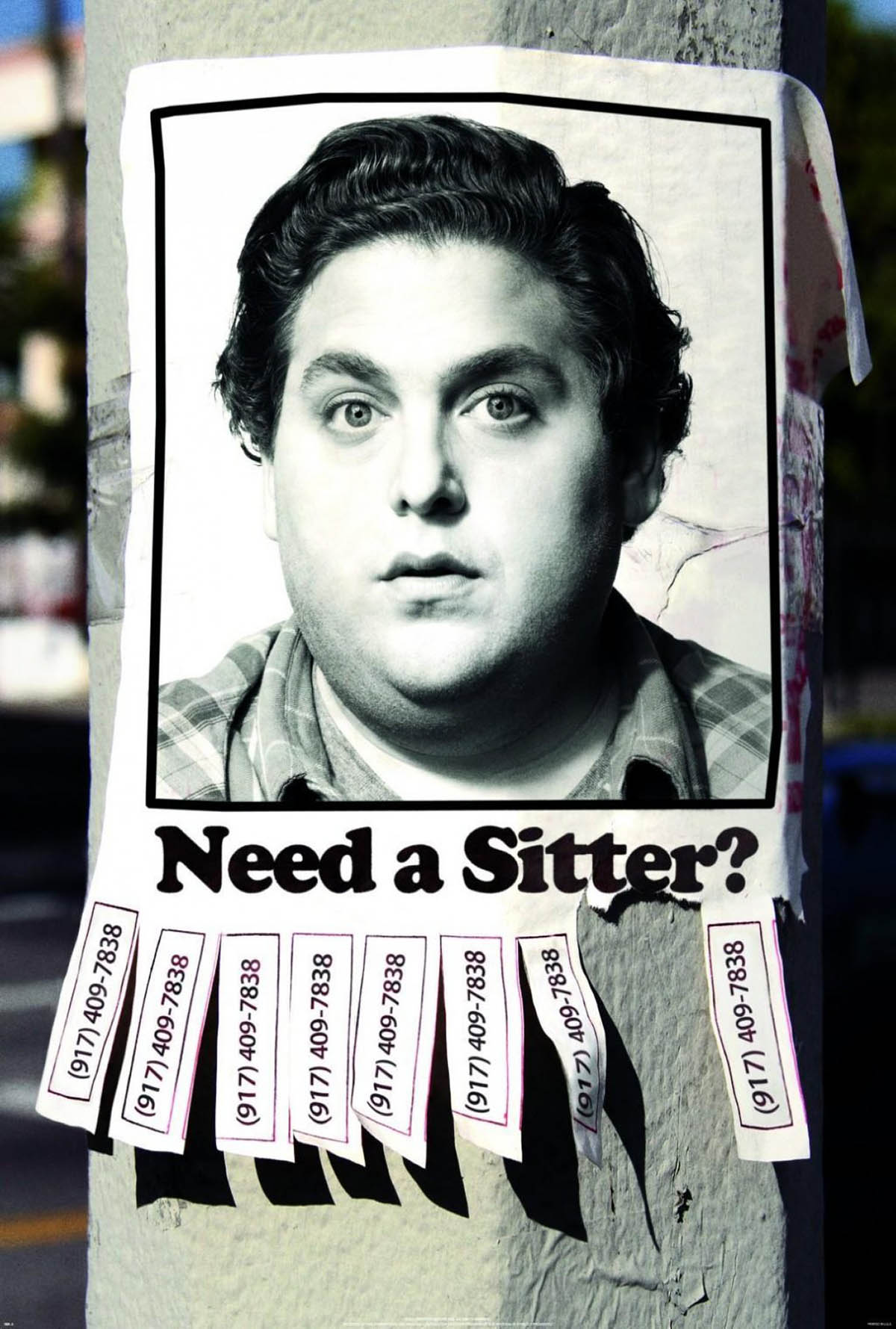 The poster for the new Jonah Hill comedy The Sitter is first a recollection of the films that made Hill famous, from the Superbad font to the awkward-doofus mugshot that calls to mind Knocked Up’s Seth Rogen one-sheet. The tagline “What if This Guy Got You Pregnant?” is supplanted by “Need a Sitter?” which could just as well read, “What if This Guy Were Watching Your Kids?” The implication—one that has helped to launch both Hill’s and Rogen’s careers—is that fat young men are not to be desired or trusted, and whoever breaks the rules is in for a world of misfortune, which will hopefully translate into killer comedy. The Sitter, directed by indie prodigy turned stoner maestro David Gordon Green, sees Hill play a suspended college student who lives with his mom and takes a babysitting job that somehow leads to sex parties and entanglements with drug dealers. Originally slated for an Aug. 5 release, the movie features Hill when he was still plump and able to fill out a headshot frame with ease, and the poster’s exploitation of his double chin as a cause for concern suggests the actor may not have landed this gig in his new, 40-pounds-lighter form.

An intentionally drab pseudo-fusion of a milk carton ad and a supermarket service flyer, the poster is at once conspicuous and subtle, broadcasting Hill’s rather famous face but also striving to immerse itself into everyday life. If you catch this essentially title-free image on the street, it takes a moment for the Hill recognition to register, and the goal to make it appear 3D is achieved. It certainly seems as if you could walk right up and tear off one of those phone number tabs, and even though you can’t, you can indeed call the number, 917-409-7838. A single ring takes you to a voicemail greeting, in which Hill’s character says he “can’t take your call, so leave a message.” He continues, “If you’re searching for a babysitter, look no further. I need, like two hours, tops, to sober up, and I’ll be right over. Okay, leave a message.” And, yes, you can leave a message, which will likely wind up on a Twitter feed or a message board somewhere as part of the film’s interactive promotional push.

Though spearheaded by an image you probably wouldn’t want to frame and hang in your office, the whole operation is a fun and clever approach to film advertising, both old school and of-the-user-friendly-moment. It merges a vintage method of gaining clients with the right-now method of putting celebrities on an even plane with their fans. Positioning its fantasy as part of your reality, it asks, “Need a Sitter?” “Want to connect with Jonah Hill? Well, here’s the number.” (A press release even promised that Hill would actually be taking some of the calls himself.) It’s all one big gimmick, of course, but it’s an exceptional one, the sort that creates fans before the film even has a trailer, and displays a shrewdness one should hope exists in the film proper. A later poster, which illustrates that ultimate no-no of carting kids to a strip club, is more indicative of what you’d expect from this Adventures in Babysitting remodel, and truthfully, what you’ll probably get. But it’s best to stay focused on the teaser poster’s minimalistic mystery, even if its all-important, beware-the-fat-guy transgression will be squashed once the newly slim Hill starts doing the press rounds.

On the Rise: Tom Hiddleston