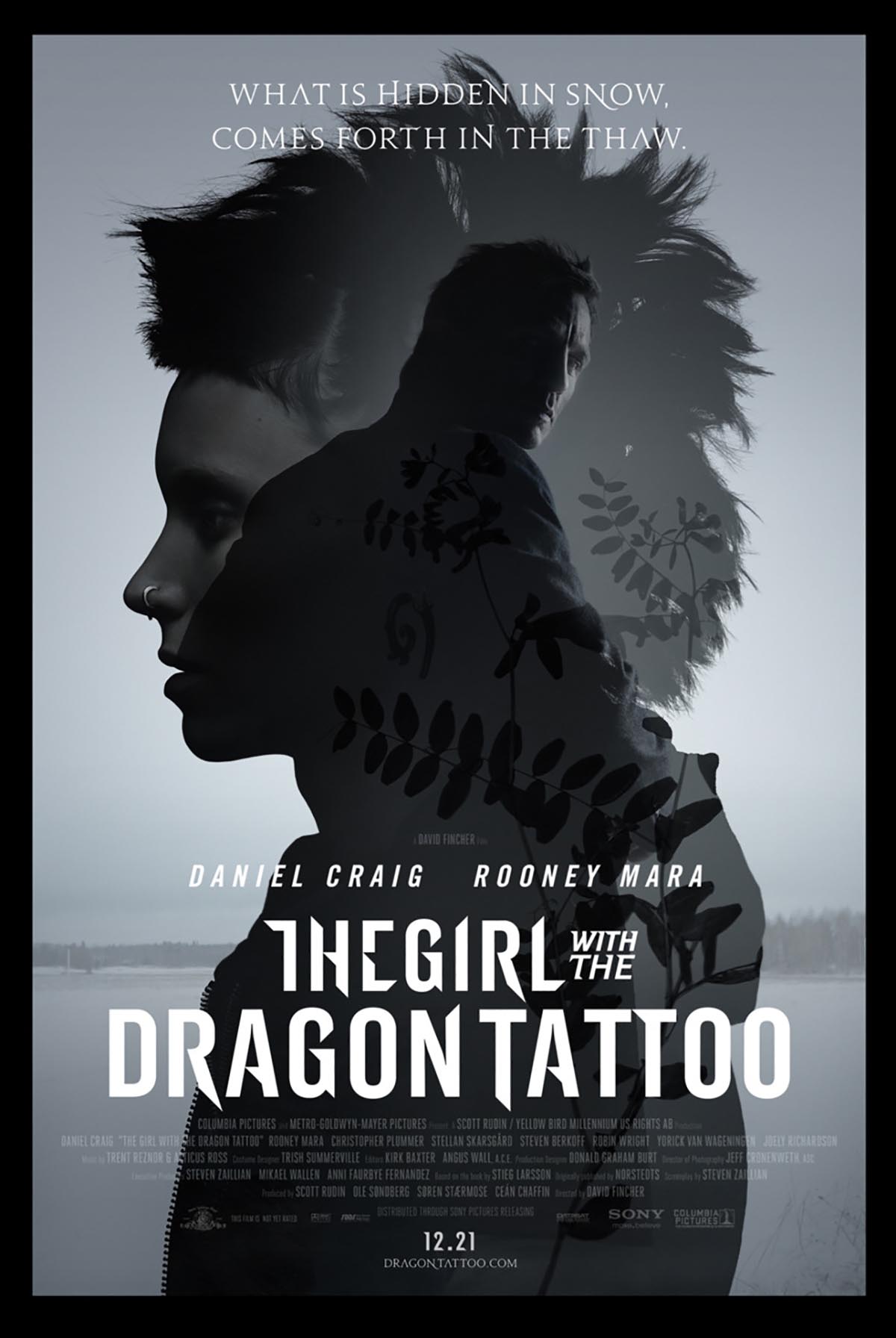 It’s hard to decide whether Sony has done a better job promoting David Fincher’s The Girl with the Dragon Tattoo with its own in-house marketing, or with outside sources like a sneak-peak, in-character W Magazine photoshoot with Rooney Mara. Either way, the combined effort is working, helping to drum up a great deal of interest in a Hollywood adaptation of a tale whose outcome virtually everyone knows, either via Stieg Larsson’s pen or Swedish cinema’s take on the trilogy. The halfway point of the promotional one-two punch seems to be a little Tumblr site called Mouth Taped Shut, which regularly posts exclusive Dragon Tattoo production stills and recently released the film’s newest poster, an artful alternative for those who don’t warm so well to Nipplegate-style sensationalism. There’s some talk around the web saying the poster isn’t studio-backed, and is simply getting major press for an independent designer. Whatever the source, this new one-sheet is a jewel of accessible design, putting forth the necessary story elements and faces without compromising what’s been a hard and edgy film lead-up.

Like the previous poster, the new one opts for black and white, a choice that proves as necessary for conveying mood as it does for evoking classic noir. It is yet another triumph of character-within-character superimposition, which this year has already factored into very handsome designs for Jane Eyre and Martha Marcy May Marlene. The implication here is that Daniel Craig’s Mikael Blomkvist is forever trying to get at the inner-workings of Mara’s Lisbeth Salander, while himself being an increasing presence in her brilliant mind. Amid their stoic looks (and amid that great, spiky coif), we get the delicate inclusion of pressed-plant leaves (denoting long-dead case subject Harriet Vanger), and that central swirl that’s fast become Salander’s signature earring. The better details, though, are the small elements that make up great design, like the precise place in which Craig’s left side touches Mara’s lips, and the choice to mark the lower edge of her silhouette with a zipper’s teeth. It’s classy line quality, and it speaks to Fincher’s own meticulousness.

“What is hidden in snow, comes forth in the thaw,” reads the poster’s tagline, another verse-like phrase following the previous, “Evil shall with evil be expelled.” This gothic speech, here paired with the cool chill of the Nordic countryside, has also helped to ratchet up the class factor, which contrasts nicely with the very Fincheresque decision to emphasize the dark, gritty, sexual and misogynistic nature of the material. The Girl with the Dragon Tattoo is one of the most well-marketed movies of the year. It benefits greatly from having a must-see maestro at the helm, but the way it has teased and enticed consumers has ensured that most won’t skip it simply because it’s recycled goods. Coming on the heels of an epic, hectic trailer that unfurls too much but hints at wonderful things, this new poster seals the deal, adding polish to the aura of a film whose every update has demanded attention.