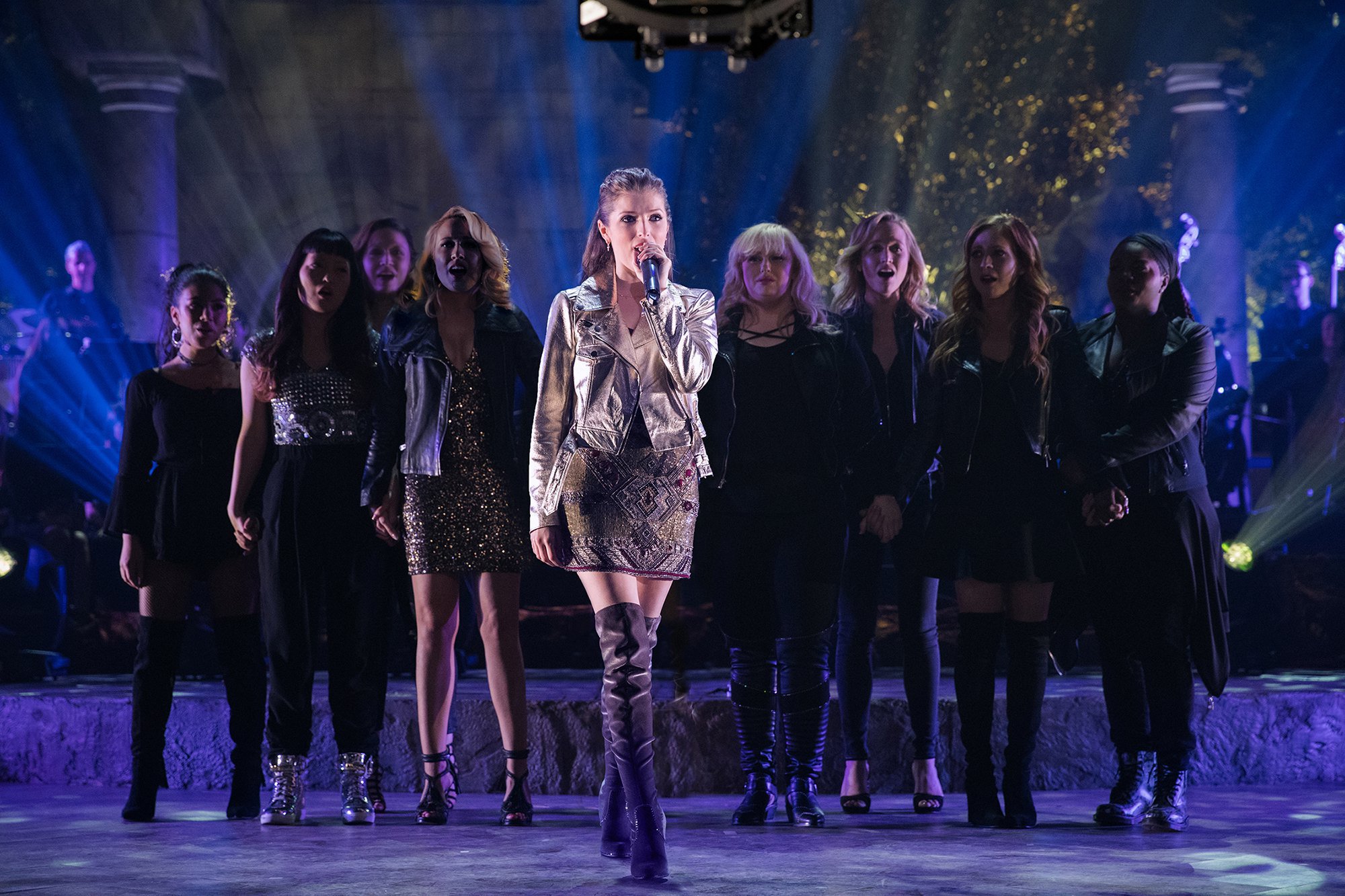 A nostalgic closing montage that splices together memorable moments from the previous films in the Pitch Perfect franchise—which follows a group of female a cappella singers from college into young adulthood—only serves to highlight how little Pitch Perfect 3 adds to what is otherwise a competently entertaining and sometimes subtly transgressive look at female friendship. The film not only fails to continue the complex conversation begun by its predecessors about both the power of women’s collective voices and the ways in which the world tries to silence them, but it doubles down on genre conventions that the franchise had previously been so adept at avoiding, further undermining the potential potency of its message.

After revealing that the post-college lives of these young women haven’t been playing out exactly as planned, the film reunites the group for one last performance—not an a cappella competition this time, but rather a battle of the bands on an overseas U.S.O. tour, with each group trying to impress DJ Khaled and be chosen to open for him at the tour’s final stop. It’s a premise that conspicuously exists for the Bellas to remind viewers that women are strongest when working together toward a common goal.

The stakes are so low here that the film crudely wedges in an unnecessary subplot involving Fat Amy (Rebel Wilson) being shaken by the sudden appearance of her long-absent father (John Lithgow). She believes that he’s finally ready to be a part of her life, but it turns out that he’s actually just trying to steal the contents of her trust fund, which she hadn’t realized had ballooned so outrageously. And after Lithgow’s character kidnaps the other Bellas and holds them hostage on his yacht, Fat Amy and Beca (Anna Kendrick) are forced to sneak on board and rescue them in a set piece that involves cross-cutting between the group’s improvised performance of Britney Spears’s “Toxic” and Fat Amy building a bomb below deck. The fact that the literally explosive conclusion of this conflict is forgotten by the characters almost as quickly as it happens only highlights the film’s overall flimsiness.

The idea of these young women leaning into each other for support when the real world has yet to offer them the opportunities for success that they’ve previously found with each other is a good starting point for what could have been an examination of how young adulthood is often an exercise in accepting truths about the world that we’ve until then been allowed to ignore. But Pitch Perfect 3 stops in its tracks to create a series of bizarrely imagined obstacles to distract the audience from noticing how little is actually being said. A bombastically over the top scene in which the Bellas accidentally destroy the hotel suite of the man who they’ve otherwise spent the entire film trying to please could be poignant if not for its utter randomness and the swiftness with which it’s forgotten. Women deserve a better vehicle for demonstrating the power of female solidarity than this empty money grab that outwardly seems to celebrate the robust, hard-fought, and ongoing social movement that it otherwise completely ignores.

Review: In the Fade