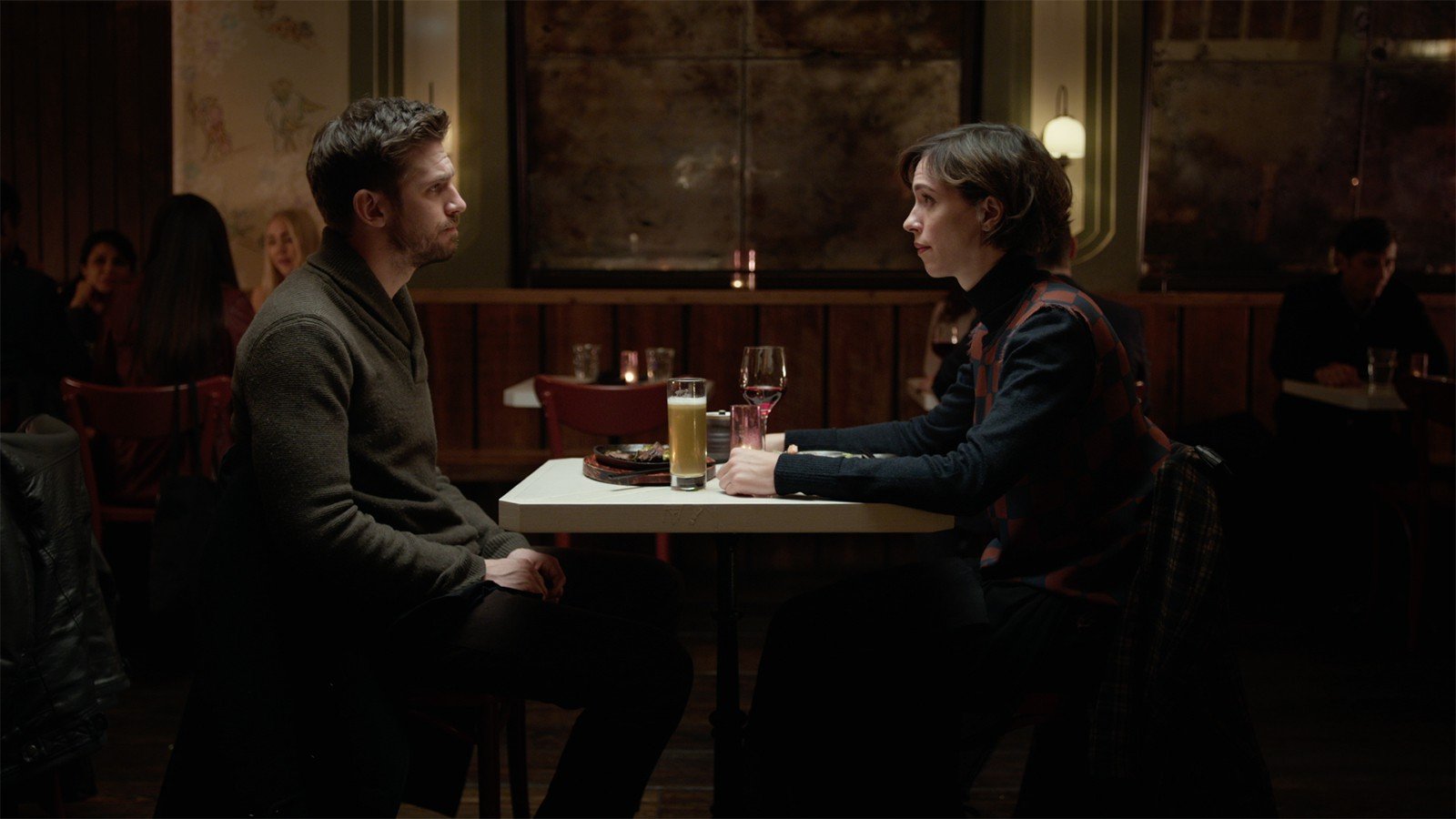 Modern romantic comedies are so mindlessly predicated on the notion of permanent pairings—equating the discovery of the “one” to a religious epiphany—that a film about a couple screwing around before marriage isn’t without an emotionally unruly potential. “Why monogamy?” is a valid question that Permission places in the mouths of a New York City couple, Anna (Rebecca Hall) and Will (Dan Stevens), childhood sweethearts who’ve never slept with anyone else but each other. While having dinner with Anna’s brother, Hale (David Joseph Craig), and his boyfriend, Reece (Morgan Spector), the subject of their sexual inexperience comes up again. Reece, a seasoned cocksman who’s also Will’s business partner and best friend, asks Anna and Will how they know they’re enough for one another when they have no basis for comparison. Though Reece sounds drunk and resentful, he has a point.

Of course, Reece taps into Anna and Will’s own insecurities. They believe that their limited sexual experience is a signifier of arrested development, and Brian Crano, remarkably for the director of an American romcom, agrees with them. Most mainstream films about sexual revolutions within staid households, such as the Farrelly brothers’ similarly themed Hall Pass, are really about the terror of trying anything that’s new or at odds with the social status quo. Such films implicitly say, “Turn the TV back on, don’t think these thoughts, you’re right where you’re supposed to be.” By contrast, Crano believes that Anna and Will need to sleep with others, as he defines their sex life—broadly, vaguely—as essentially that of two recently deflowered virgins who’re stuck in the “two-pump chump” realm of normal love-making.

But Crano is as skittish as his protagonists are about the particular contours of their dilemma. To put it bluntly, Permission is a sex film without the sex. Which is unfortunate since the audience needs to know more about Anna and Will’s relationship for their drama to have a center. For instance, is their sex life really relegated to a few physical gestures? Certain dialogue implies that Anna and Will have pushed themselves further, though these scenarios aren’t dramatized. Most maddeningly, when Anna and Will agree to sleep with other people, their new experiences—which are theoretically the entire point of the film—are almost entirely elided. We see Will or Anna briefly kissing someone, and then Crano cuts to, at best, a bit of abstract humping.

Crano shows little interest in the emotional or physical textures of situations that, one assumes, offer a mixture of amazement, humiliation, terror, and intoxication. What’s it like to kiss a new man or woman for the first time in decades? What if one of the pair was better at getting laid than the other, sparking resentment? How does one adjust to the rhythms and tastes and shapes of a new lover? What about the challenges and exhilarations of simple flirting? It doesn’t occur to the film that Will and Anna, though attractive, might find their quests impeded by their lack of confidence and street savvy. Crano doesn’t even allow Anna and Will to talk about their new lives, as their reportage back to one another could add another level of erotic interrogation to the narrative. When Will asks about the penis of Anna’s new partner, we want to know about it too, beyond the banalities she offers.

The film has a few strands of weirdness. Will has a thing for spitting in women’s mouths that he’s never revealed to Anna, which comes out when he begins sleeping with Lydia (Gina Gershon), a sexy, older, and far more experienced lover who wanders into his carpentry shop. Anna also exhibits surprising bravado when she strolls into a museum and has a quickie with Heron, who’s played by Raúl Castillo with a commanding smugness that momentarily jolts Permission out of its earnest passivity. And, as Reece, Spector exudes a dangerous magnetism that almost belongs in another film altogether. But these touches only call the viewer’s attention to the fearful void at the narrative’s center. Permission is cautious and generic, neutering its best instincts. The film’s title is all too apropos.