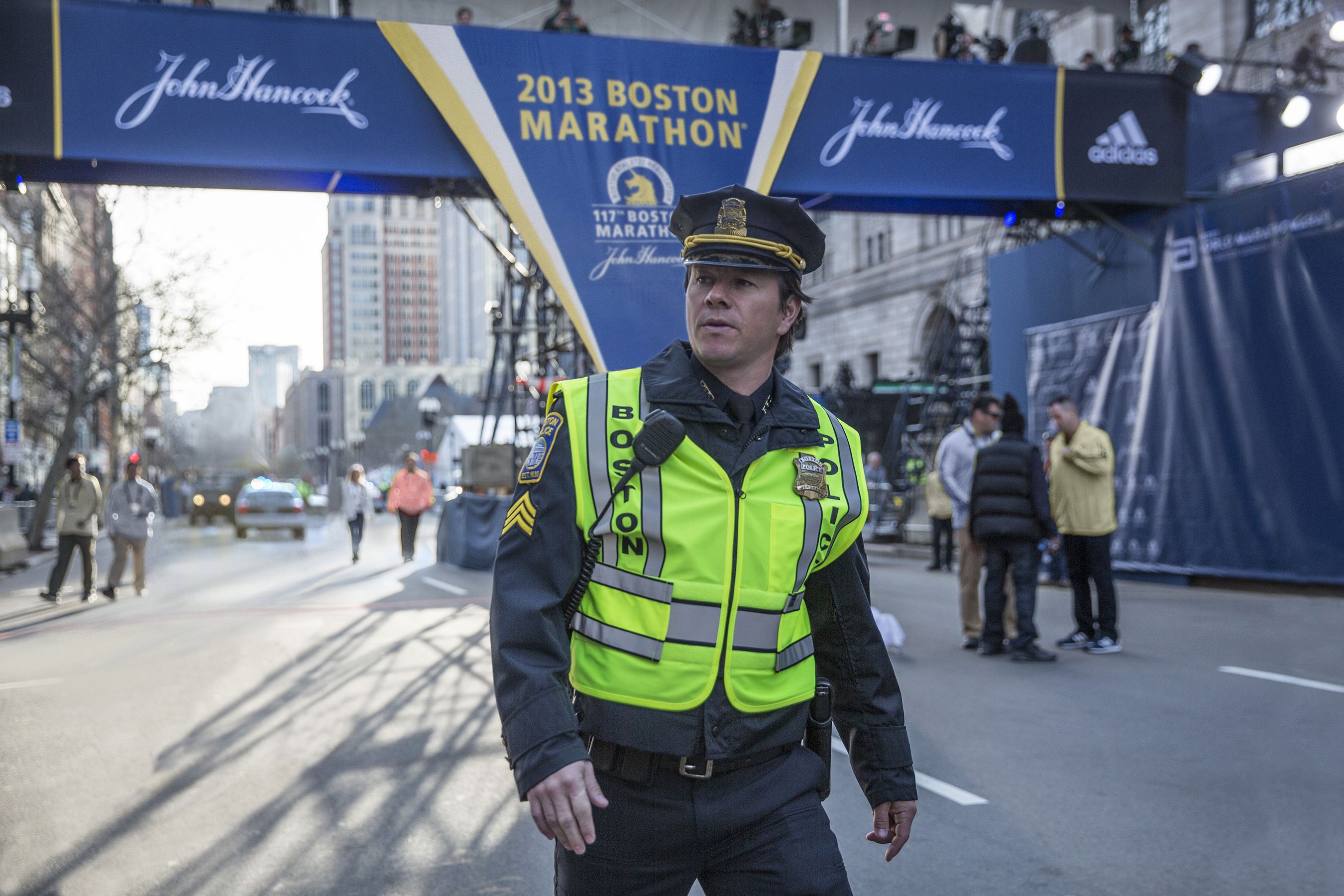 Tommy Saunders (Mark Wahlberg), the fictionalized protagonist of Peter Berg’s Patriots Day, is a sergeant for the Boston Police Department who comes to represent the tenacious limping embodiment of “Boston Strong.” Serving probationary punishment by monitoring the finish line of the 2013 Boston Marathon, an injured Saunders finds himself at every pivotal juncture in the hunt to find those responsible for the bombings that, about four hours after the start of the race, killed three people and injured more than 200. Though Saunders functions as a thread connecting the film’s representation of an anxious city and its gripping retelling of a broad manhunt, over the course of the film he becomes an extraneous and distracting presence. Saunders is a fairly narcissistic creation, functioning as little more than an opportunity for Wahlberg, also a producer on the film, to place a crown on his career as a self-appointed Hollywood ambassador to the Boston metro area.

Luckily, the film surrounding Tommy Saunders is a genuinely taut, rigorously sourced docudrama. Patriots Day begins in the early hours of the marathon on April 15, 2013, introducing our hero and a few of the day’s other critical figures. The film devotes efficient but effective scenes to the youthful idealism of MIT campus policeman Sean Collier (Jack Picking), caring and athletic newlyweds Jessica Kensky (Rachel Brosnahan) and Patrick Downes (Christopher O’Shea), and the lonely but optimistic Northeastern student and Chinese immigrant Dun Meng (Jimmy O. Yang), all of whom become crucial figures in the bombing’s aftermath. Not far away in East Cambridge, Dzhokhar Tsarnaev (Alex Wolff) drinks milk and watches video of Muslim men in robes while his brother, Tamerlan (Themo Melikidze), clips his beard.

Though Patriots Day is an unalloyed tribute to the victims of the bombings and first responders involved in the subsequent 100-hour terrorist siege, Berg and co-screenwriters Matt Cook and Joshua Zetumer devote most of their editorial attention to the relationship between the Tsarnaevs, capturing its mythic dimensions—assimilated younger brother falls hesitantly under the sway of his radicalized elder—in surprisingly mundane ways. Elements of Dzhokhar’s flippant teen energy have become the stuff of long-form articles and magazine covers, but it’s still striking to see a mainstream film in which a convicted terrorist speaks a line like “Bro, I’m not pussing out or nothing” or, later, asks a man he’s just hijacked whether his car stereo has Bluetooth functionality. Patriots Day stumbles toward the finish line when it serves up a few trite and rousing depictions of good and evil; it even casts harsh and unexplored aspersions on Tamerlan’s wife, Katherine Russell (Melissa Benoist), and the role she played in the attacks. But the focus on Dzhokhar’s haphazard trajectory toward radicalism betrays a captivating ambivalence about taking action in a film that prioritizes confident decisions.

Sensitive but trigger-happy, Dzhokhar seems to be actively coming to grips with his decision to abandon his pop culture-loving youth in favor of a reign of terror. It’s never entirely clear whether he’s serving a cause, acting in service of Tamerlan, or coasting on a manic adrenaline rush. The consequences of taking action are the fulcrum point of the film’s other major concern: the complex web of cops and feds charged with identifying and capturing the Tsarnaevs. Turf wars begin in the immediate aftermath of the bombings, which are captured through recreations and CCTV videos. Tobias A. Schliessler’s edgy camera lingers over a stew of smoke and drifting ribbons of paper, and a police officer stands sentinel over the corpse of a young child as the F.B.I. and local police debate how to treat the crime scene. (The score, by Atticus Ross and Trent Reznor, blends saccharine strings with propulsive ambient techno that often recalls the tones of a heart monitor.)

After the bombings, F.B.I. Special Agent Richard DesLauriers (Kevin Bacon) and Boston Police Commissioner Ed Davis (John Goodman) clash over the status of the investigation: whether to label it terrorism, and when to publicly release photos of the Tsarnaevs after they’ve been leaked to the media. Despite the bombings and subsequent manhunt being so fresh in the public memory, Berg is keen to outline how DesLauriers and Davis’s decisions impact the general populace, and as a result invigorates the proceedings. Patriots Day is as wonkish about how to conduct a massive manhunt out of an improvised command center as it is about the staging of the investigation’s most staggering development: a high-speed chase that leads to an astonishing showdown between police and the Tsarnaevs in nearby Watertown.

In its devotion to process and diligent, capacious storytelling, the vast majority of Patriots Day manages to circumvent the blunt allure of vaguely jingoistic “Boston Strong” patriotism. That said, the film makes a late and aggressive sprint into simplistic rationalizations and insipid sentiments. A young cop takes a time out from the Watertown siege to ask Tommy Saunders whether or not he thinks terrorism is preventable, allowing Wahlberg to deliver an awful monologue about love and hate, good and evil. It ends with a trendy (see: Sully, Hacksaw Ridge, Tower) reveal of the real-life faces of these victims and heroes, replete with interviews that espouse all the bogus dichotomies the rest of the film does such a compelling job of complicating. Patriots Day makes no bones about its local bias, as it’s broadly suspicious of the secretive national government (the F.B.I.) and roundly supportive of the area’s more bullish (and supposedly more transparent) police departments, but the film is elsewhere surprisingly fixated on arguing its case.

Berg displays a nearly Fincherian interest in how information flows between different legal entities and how those developments impact a broader society of concerned citizens compulsively refreshing news sites and Reddit pages in the heat of breaking news. Tense scenes play out as intensely relevant debates about how much the public should be allowed to know about the swirl of false leads and solid evidence in their midst. As long as Patriots Day is concerned with recreating the sense of ambient chaos among sparring investigators and an anxious community, it’s immersive and thrilling.