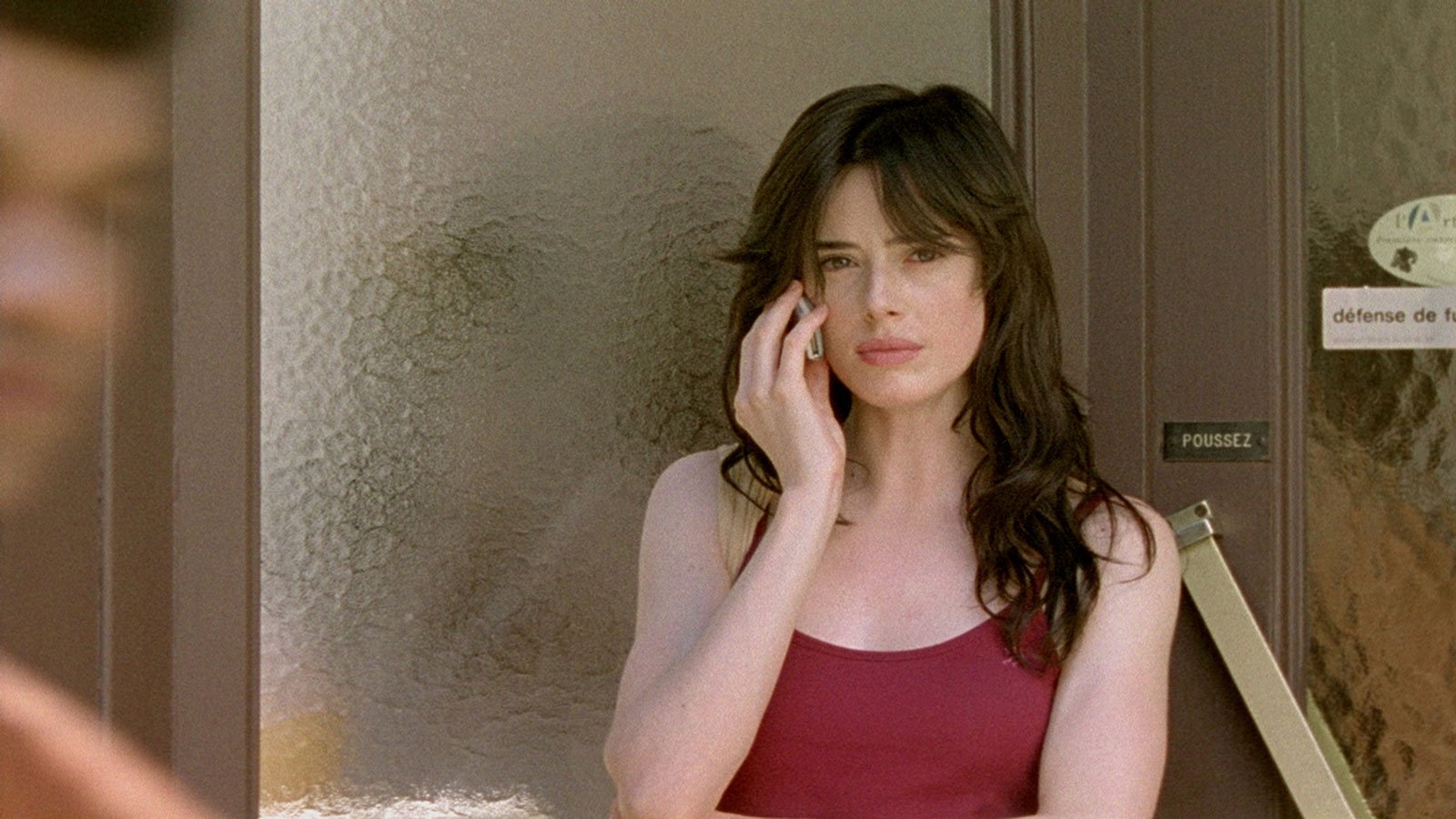 “A fellow will remember a lot of things you wouldn’t think he’d remember. You take me. One day, back in 1896, I was crossing over to Jersey on the ferry, and as we pulled out, there was another ferry pulling in, and on it there was a girl waiting to get off. A white dress she had on. She was carrying a white parasol. I only saw her for one second. She didn’t see me at all, but I’ll bet a month hasn’t gone by since that I haven’t thought of that girl.”—Mr. Bernstein (Everett Sloane) in Citizen Kane

In the City of Sylvia is about a woman who weighs upon the soul of a young artist the way that Jersey girl haunted Mr. Bernstein for a lifetime. When the young man, Él (Xavier Lafitte), thinks he sees her again after six years, he follows her discreetly through the streets of Strasbourg to make sure. This is his chance. But instead of accosting her, he stalks and studies her endlessly. Only once does he meekly call out to her, to no response.

That’s basically the movie. Director José Luis Guerín observes Él in the same unblinking fashion that the tortured artist tries to record his “Sylvie” (Pilar López de Ayala) in a sketch pad. What would be a two minute interlude in a Ho’wood dramedy for twentysomethings occupies roughly 80% of this film. Sounds like something to test your patience, but In the City of Sylvia actually tests your sensitivity—emotional, sensual and philosophical.

The devices Guerín uses to probe your consciousness are all cinematic—picture and sound. There’s less dialogue here than in the first half of 2001: A Space Odyssey. A crush of ambient sounds intrudes upon Él’s quest like stray jungle noises during a hunt. The distractions seem to multiply and amplify with his distress. Sound editor Marisol Nievas, mixer Ricard Casals and recordist Amanda Villavieja construct a sonic world that imitates the effect of a shotgun stereo mic mounted directly above the lens. Bikes, cars and chattering pedestrians approach from off camera, the sounds rising, deepening, until they explode with fiedlity as their sources pass through the frame to trouble Él’s fragile world.

These blasts of real life (or perhaps the most brilliant foley job ever recorded) render Él’s dilemma that much more personal. We are never so conscious of our personal albatrosses as when we lug them around in public, through the minefields and traps of dispassionate strangers. A statuesque career woman’s clattering heels sound deadly. A stout elderly woman has such a soldierly gait, it looks like she’s wielding a two-by-four instead of a baguette. A homeless woman rolls an empty bottle on the cobblestone streets. The shot is wide and the woman is small in the frame, but aurally she and her tinkling bottle are in extreme closeup, or at least in the extreme foreground. The entire pursuit sequence is like this, visual long-take master shots over a bed of audio that transitions between “closeups” and aural deep focus. This technique was used to lend mostly static urban compositions in Hou Hsiao-hsien’s Cafe Lumiere some dynamism and atmosphere. But what felt like failed wannabe-Ozu restraint in that film comes alive in In the City of Sylvia because of its simple, taut thread of suspense and subjective, nosy, unreserved camera movement. Guerín’s camera is a greedy but discreet voyeur. It creeps into Él’s emotional and, only half the time, literal P.O.V. by stalking him at the same halting pace that he stalks “Sylvie.”

This movement, across a close approximation of real time, fights off any potential boredom in the audience. (Horror directors, take notes.) I found I didn’t like Él any more than I warmed to Janet Leigh or Anthony Perkins in Psycho, but as with those Hitchcock protagonists, I had to follow him to whatever end was coming. There’s no horror dread here, just the ache of having to have somebody long gone from one’s life, or at least see them again. Who can’t relate?

Guerín seems determined to make sure we can relate by casting some predictably telegenic faces as the stalker and his object of desire. In a basic thrift store hipster uniform and chin stubble that seems applied with a mascara wand, Lafitte looks exactly like the European Artist a Madison Avenue creative would cast for a colonge spot. But the actor is firmly in the moment, so his prettiness isn’t much trouble. He bears the demeanor of a man chasing a memory that becomes an obsession that becomes a physical addiction that becomes a ghost. Pilar López de Ayala is just your average unspeakably beautiful young lady. At a glance she could be mistaken for Isabelle Adjani or Monica Bellucci. Her facial expressions and the sun collaborate on one of the film’s miraculous moments of found visual poetry: When Él and the woman he thinks is Sylvie finally come face to face on a streetcar, mottled and shifting sunlight render her angelic. Guerín uses his location to stylize Él’s experience of this moment. Smart.

In the City of Sylvia overcomes its pretensions and generic sense of beauty by capturing simple, universal incidents like this without fuss (onscreen, anyway), using a cinematic vocabulary from the silent era and a sound aesthetic from the more daring ‘70s films instead of today’s preferred mumblecore/Youtube/blog-influenced blather. Guerín’s actors are pretty, but his filmmaking is gorgeous.

Steven Boone is a New York-based critic and filmmaker, a contributor to Vinyl Is Heavy and the publisher of the pop culture blog Big Media Vandalism.

Review: I’m Not There