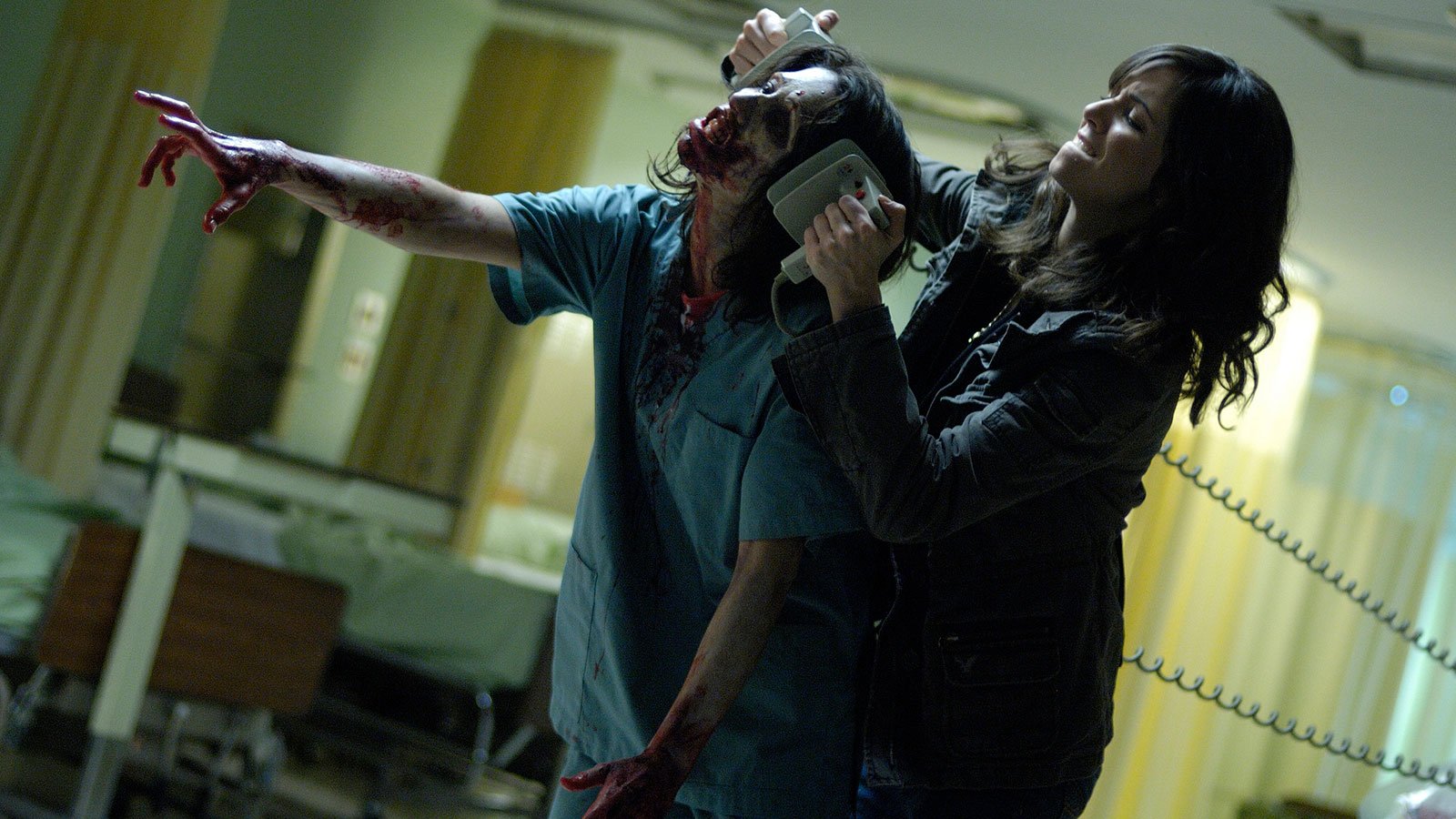 Positing itself as a final assemblage from some unspecified point in the future (so that it plays as a strange, Nostradamus-like amalgam of retrospective and prophecy), George A. Romero’s Diary of the Dead gleefully engages with themes of spectatorship and subjectivity. It’s the most labyrinthine and multifaceted of the director’s Dead films, possessing a master’s grasp of visual/aural interplay, in addition to a wicked mix of humor and pathos—in Romero’s universe, a deaf, scythe-wielding Amish dynamiter is at once a ridiculous figure of fun and a tragic hero prone to a selfless (and gruesome) act of martyrdom.

A prologue, ostensibly filmed by a news crew, reveals the zombies’ kill point to be head center, corresponding to the position of the third eye. Whether or not Romero is up on his chakras, his primary metaphor is clear: Diary of the Dead documents the invasive assault of media (in all its guises) on the inner consciousness. Using a tried-and-true film school setup, the film follows a ragtag bunch of student artists and their Universal Horror-accented professor (whose skill with an archer’s bow is only superseded by his prowess with an alcohol flask), all of whom are given to baldfaced pronouncements (pro and con) about the nature and so-called truthfulness of moving pictures. Their initially disconcerting tendency to speak in capitalized supertext helps to elicit Diary of the Dead’s resonant and counterbalancing subtext, the idea that the camera itself is an irremovable appendage, especially when contemplating a cataclysm unfolding.

Cataclysm takes many forms, from the personal to the global; for all the apocalyptic emptiness of the film’s first-person landscapes, perhaps its most disturbing sequence is a throwaway home video where a children’s birthday party becomes a hysterically unwitting bloodbath at the hands of a ravenous clown. The setup is familiar, but the incorporation of the camera as both distancing effect and character (it seems irrevocably drawn to the action, mesmerized by it) only deepens the sense of horror. Romero himself is fascinated by the human race’s strict adherence to instinct and ritual—his zombies have always had an endearing quality because, in-between the bloody feasts, they play-act the various customs and habits recalled from their days among the living. An insert of a gaggle of zombies wading along the bottom of a full swimming pool, or the image of the film’s heroine, Debra (Michelle Morgan), coming face-to-face with her walking-dead mother (a flash of recognition passing over the latter’s eyes before she impulsively attacks) speaks volumes as to Romero’s sociological humanism, as does a charged exchange between Debra and a group of Black Panther-like survivalists that ends in a quietly profound acknowledgment of kinship.

“Shoot me,” says the young cameraman, and on-screen Diary of the Dead auteur, Jason (Joshua Close) at the film’s climax. The double meaning certainly isn’t lost on viewers and characters alike, though a subsequent invocation of the archangel Michael (punctuated by a well-placed bullet to the brain) casts this seemingly obvious pronouncement in a revelatory light. By the end of Diary of the Dead, the camera has become a conduit to death and resurrection (cinema as simultaneous remembrance and perpetual life-force). And yet Romero puts a fascinating chink in the foundations of his argument via a coda that revisits and reworks the cruel-world fatalism of his original Night of the Living Dead, positing an explicit, confrontational query over a painterly and precise digital still-life. The only appropriate response to the Pittsburgh poet laureate is, perhaps, exactly that which we see onscreen: bloody tears.