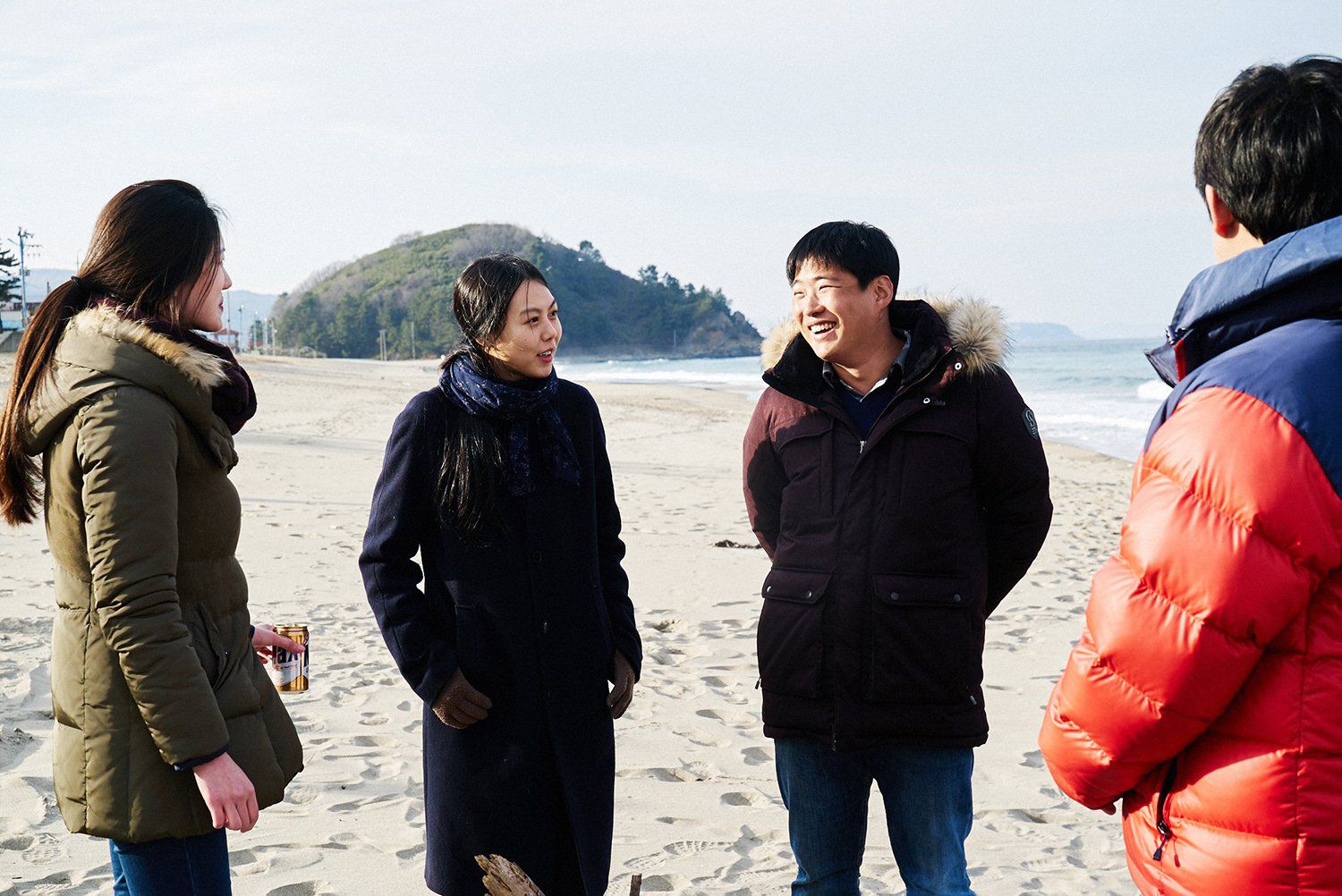 Hong Sang-soo’s continuing devotion to mining variations of more or less one plot over the course of dozens of films suggests the cinematic equivalent of people who wear the same outfit every day so as to save their intellectual energies for more pressing issues. Plot is the figurative vase that holds the water of inspiration in cinema, serving as a pretense for rendering personal textures consumable for the public. And so Hong’s unwillingness to deviate from a set of narrative tropes allows him to cut straight to the manna of his concerns, riffing on neurotic etiquette with often revelatory obsessiveness.

Which is to say that On the Beach at Night Alone is another film about South Korean creatives who’re romantically adrift, drowning the pain of loneliness and infidelity in food and soju while talking of their insular lives with poignant yet unsentimentally dramatized obnoxiousness. Like The Day After, this film appears to be a reaction to Hong’s affair with Kim Min-hee, with the two productions implicitly forging a he-said-she-said diptych. In the tradition of most Hong films, On the Beach at Night Alone marries rigorous structure with seemingly spontaneous action, deriving its energy from the pointed contrast.

The film is divided into two asymmetrical acts, each preceded by their own opening credits sequence and shot by a different cinematographer (Kim Hyung-koo and Park Hong-yeol, respectively). Running roughly 25 minutes, the first act is an autumnal impressionist reverie, following a famous actress in crisis, Young-hee (Kim), as she visits a friend, Jee-young (Seo Young-hwa), in Hamburg. The women stroll through street markets and parks, having dinner with friends, with whom they speak in awkward English. A highlight of this act is a scene on a balcony where Jee-young mentions her failed marriage, suggesting that she has little sexual desire, though her physicality tells a different story: Crouched and sad, this woman embodies unfulfilled longing and the lack of confidence that’s both the cause and effect of such a state.

Seo offers a portrait of someone who’s too unassuming to look out for herself. Older than Young-hee, Jee-young feels that the doorways to sex and love are closed to her. Preoccupied with her own loneliness as a jilted mistress, she isn’t able to appreciate her friend’s torment. And this blindness grows maddening, particularly when Jee-young confesses that she envies Young-hee’s confidence and beauty, exhibiting despair and self-loathing with heartbreaking matter-of-factness. Hong’s stripped-down aesthetic of repetition enables this sort of emotional revelation. We’ve seen variations of Jee-young’s confession before in Hong’s cinema, as recently as in The Day After, but in never quite this way, with Seo’s beautifully plainspoken poetry.

The film’s first act allows the audience to form an attachment to Young-hee and Jee-young’s relationship, while the second act, roughly 75 minutes long, finds Young-hee floating back and forth between friends in Gangneung, which is rendered in chilly and industrialized hues. Jee-young is sorely missed as the film scatters off into anecdotes that pivot on the horny cluelessness of men and the needy self-absorption of women, purposefully denying us the sort of central duet that commands the first act. A conversation between Young-hee and a buddy, Myung-soo (Jung Jae-young), is a comic highlight, when the latter casually states that his partner in a coffee house is just a friend when she’s clearly a serious lover. It’s understood that most of Young-hee’s friends are attracted to her, fencing with her in gestures that will be familiar to people in the habit of befriending dashed romantic opportunities.

On the Beach at Night Alone’s two parts are united by repetitions that signal the recurring habits of our lives and the emotionally mathematical fastidiousness of Hong’s imagination. In both halves, Young-hee says that she should move to the city in question, suggesting her desperation to rejoin a fixed society. In each half, Young-hee is told that her romantic grief over her lover has caused her to look more mature and “womanly”—an observation that’s never not creepy. Correspondingly, Young-hee tells Myung-soo that he looks older, commenting on his face in a manner that’s repeated almost verbatim in a similar context in The Day After. Beaches, which give the film its title along with a famous Walt Whitman poem, figure in each half as the ultimate realm of Young-hee’s solitude, which is breached, however, by unseen males who attempt to put the woman back on course—white-knight gestures that are facetiously staged to epitomize the ego of patriarchy.

The anonymity of these men, including Young-hee’s mostly unseen married lover, is a form of auto-critique, as Hong is also an unseen master of ceremonies controlling his characters from afar. In a confessional climax, Young-hee claims that “personal” films are boring and exploitative as her ex-lover collapses into tears. In On the Beach at Night Alone, Hong simultaneously positions filmmaking as the ultimate act of atonement and evasion, eviscerating himself so that he may live to stage several more films about the futility of getting hammered and worshipping and bedding gorgeous young women. Hong’s repetitious thrashing is one of contemporary cinema’s most damning and evocative representations of arrested male myopia—which is turned, by the transformative force of his democratic talent and empathy, into an ongoing poem of self-entrapment.