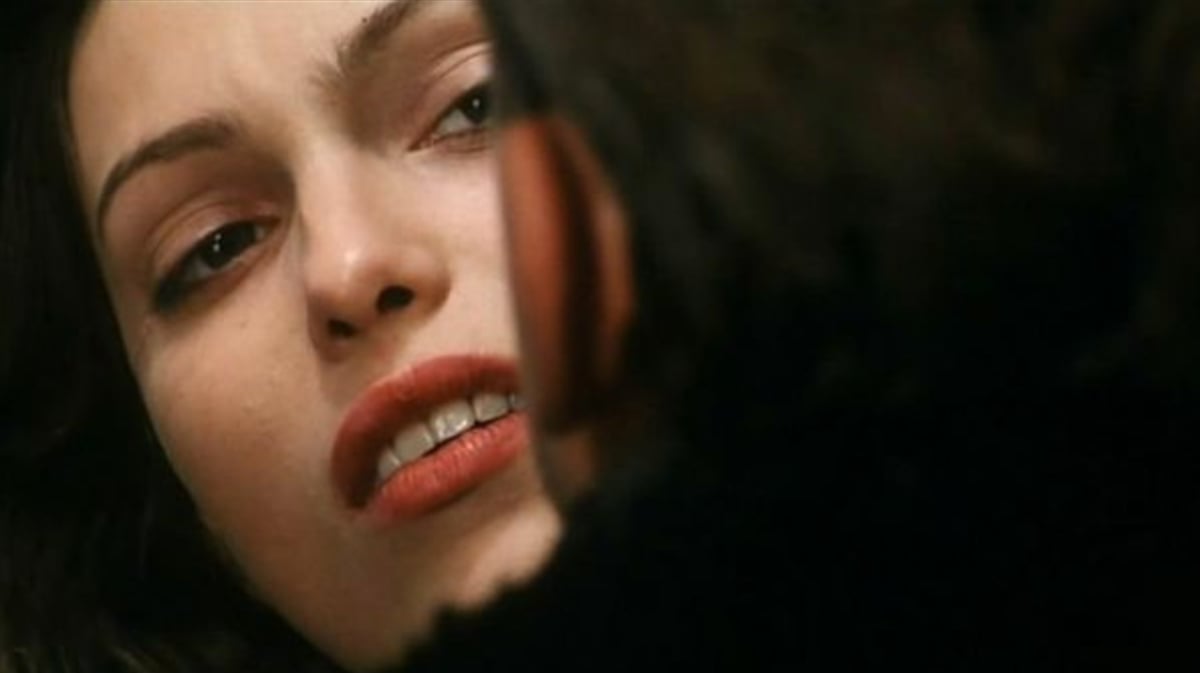 A man meets a woman, and we’re not even five minutes into the running time of Andrzej Zulawski’s Szamanka before they are having sex on the floor of her rented apartment. Immediately thereafter, this man is revealed as an anthropology professor excited by the discovery of a mummified shaman. The primal act of sex and the mysticism of the strange religious-historical find are the engines that drive this strange, often hilarious, frequently brutal genre film. It’s an art film about sex and sweat, one that seems to have emerged from the guts as opposed to intellectual game-playing, or in the bleakly absurd streets of mid-1990s post-Communist Poland. It’s fast, frenetic and seems to have been made either by a young man bursting with fresh energy or an old man who films every moment as if he might never get another chance to work.

As it happens, both are kind of true. Zulawski was, in fact, middle aged and soon to cut his directorial career short in favor of writing books. He had not made a film in his native Poland since his work was banned in 1976, and he vowed never to work again under the Communist regime. Szamanka was an independently funded production outside of the state. Most noted in America for his “video nasty” horror project Possession, starring Sam Neill and Isabelle Adjani as a married couple descending into a hellish spiral of rage and carnal despair (and that’s before the monster shows up), Zulawski’s work is often about the painful relations between men and women.

Most of the time, he seems to prize love as something worth pushing one’s self to the limit for, but there is no room for love in the world of Szamanka. The man here is a tough-looking, non-academic professor named Michael (played by Boguslaw Linda, a Mel Gibson/Bruce Willis-style action star going out on a limb) and the woman is a spastic, free-spirited, wild holy fool pretending to be a university student nicknamed “The Italian” (non-actress Iwona Petry in an entirely uninhibited performance). They fuck all the time, and their dialogue is usually spoken more for the speaker, not for the listener. He is compelled by fucking as a means to discover the spiritual, and she’s a kind of female shaman figure herself, drawn to sensation. She’s like a child curious of everything, and that makes her wonderfully uncivilized. Licking glass, munching on cat food, erupting in a voodoo dance during a bourgeois party, rubbing raw meat into her crotch and smashing glassware off of tables when her nerves are shattered are some of her milder proclivities.

I’ve said very little about the plot, but as film writer Daniel Bird has pointed out, Szamanka emerged around the same time as David Lynch’s sexual anxiety thriller Lost Highway and David Cronenberg’s “sex and car crashes” exploration, Crash. These movies are driven forward by their frank exploration of the body; not by character or plot or even narrative, really. Zulawski, too, is interested in the physicality and how pushing that to the extremes allows one to tap into the beyond—maybe the magical, and certainly the sense of freedom. Interestingly, the love scenes are accompanied by an insistent, primeval drum beat (as opposed to the supernatural mummy scenes, which are heightened by a lush romantic score). A scene of the holy fool walking through a factory becomes a kind of ecstatic epiphany of fire, smoke and beams of orange-red light. Over-the-top, maybe, but also startling and unique…and lest we take the film too seriously, the anthropologists a few scenes later have painted faces and do a marijuana-fueled ritual dance around the shaman. In his analysis of the film, Bird says quite rightly, “Zulawski is taking the piss.”

Szamanka drifts between horror and humor, and thus is not for everyone. As a Zulawski enthusiast, I’m not sure it’s even for me. About halfway through, it starts to feel like a repetitive nightmare cycle, albeit an energetic one, but it lacks the feeling of a rush towards some sort of explosive climax. It lurches and careens all over the place, sometimes with fascinating sequences (the Italian shaving her pussy and then answering the door for a delivery man feels like a joke on pornographic films, and a scene with the anthropology professor cleaning toilets feels like a scene of grim reality amidst all the surrealistic fanfare around it.) Szamanka abruptly ends with a strange grotesque image of eating brains, which is apparently one of the big reasons Zulawski wanted to make the movie. And then seemingly out of nowhere, bombs start to explode in the streets lighting up everything in a terrible nuclear white glow. If this review has piqued your interest in this unique, one-of-a-kind Polish fantasia, the movie can be found via the distributor Mondo-Vision. All I can say is, be open and see where Szamanka takes you.