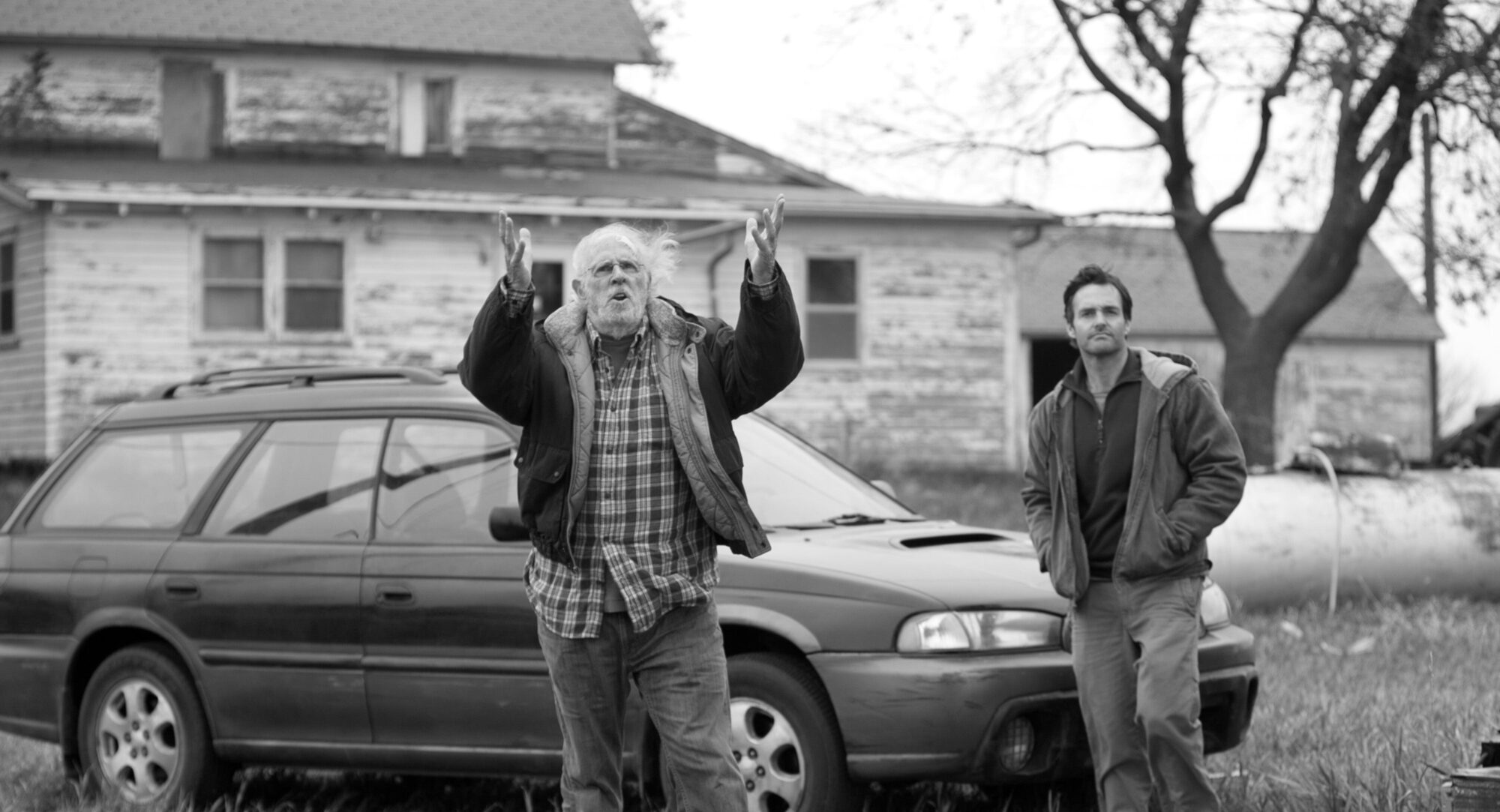 The road might be the most oft-used symbol in all of film—a simple, literal representation of a character’s narrative path, not to mention a visual cue for a movie’s own trajectory. An image less often employed is the vanishing point, that theoretical spot on the horizon where, in terms of perspective, all roads—and all lines—finally meet. In Nebraska, Alexander Payne’s latest road movie, a vanishing point appears in the first shot, the last, and a handful in between, serving as one of many weighty motifs within Payne’s carefully crafted aesthetic. In regard to Nebraska’s plot, which centers on septuagenarian Woody Grant’s (Bruce Dern) journey from his Montana home to his titular native state, supposedly to collect $1 million in sweepstakes winnings, the vanishing point welcomes multiple readings. It could merely be seen as the march toward mortality captured in the picture plane, or, in name only, it could refer to the forever-changing face of the American Midwest, or the much-speculated deterioration of Woody’s mental state. But given that Woody’s quest is grounded in debatable uncertainty, and that this particular motif marks an intangible concept, it’s best to chalk its emphasis up to the fact that Nebraska, much like matters of perspective, is all about perception.

Thanks in large part to Dern’s wisely and wonderfully restrained performance, this is particularly true of Woody himself, who never shows any definitive signs of instability or dementia, yet behaves erratically, and is seen and described by all around him as a man of dwindling lucidity. Obsessed with a suspicious certificate that arrived in the mail, and that he claims he must take to a Lincoln, Nebraska office—750 miles away—to redeem his prize, Woody insists on walking the impossible distance, as he has no license and his cacophonously skeptical, expletive-spouting wife, Kate (June Squibb), won’t drive him. What’s perhaps most suggestive of Woody not being “all there” is his lack of an answer for why he didn’t just take a bus, a question posed by his sons, David (Will Forte) and Ross (Bob Odenkirk). But maybe this man of simple means just didn’t think of it, or maybe the reasoning comes down to Payne’s desire to accentuate an unyielding pilgrimage. Woody’s undisputed alcoholism doesn’t help his image or credibility, and in the opening act, both the viewer and David, who eventually agrees to drive his dad to Lincoln, are pelted with reasons to doubt this grumbling old antihero, who’s so terminally unkempt that his nose hairs and mustache have become one.

But, as David and Woody progress on what may well be a futile mission, and the son’s fears of inheriting his father’s seemingly aimless traits are revealed (David couldn’t commit to his last girlfriend, and his best prospect might be management at the shop where he sells stereos), Woody’s fascinating layers are peeled back, subtly exposing what’s beneath an outwardly blasé and aloof approach to life. “He just believes what people tell him,” David eventually, and perhaps inaccurately, says to another character, regarding his father and the precious, promising certificate. “That’s too bad,” the character replies.

This exchange could be taken as an implicit nod to Payne and screenwriter Bob Nelson’s key trick on the audience. Just as Woody proves infinitely more complex than how he’s first conveyed (turns out he’s a spiritually scarred war vet, with a need for validation, and deeper motives still), other characters also become more than the film initially sells them to be. There are some things for which Nebraska really can’t be forgiven, such as its outright exploitation of Midwestern stereotypes, and its predominately vulgar and nyuk-baiting characterization of Kate. After Woody suffers a minor, mid-trek accident, the whole family convenes in their hometown of Hawthorne, Nebraska, at the home of Woody’s brother and sister-in-law (Rance Howard and Mary Louise Wilson), and Payne presents the relatives as flat grotesques, even placing the audience “inside” the family TV, so we can gaze out at them as if ogling a white-trash doll house. And Kate, no matter how sinfully funny her randy, sharp-tongued quips, first plays as a wretched and caricaturish voice of opposition, particularly in a scene in which she verbally desecrates the graves of Woody’s departed kin.

And yet nothing is quite so simple in this world that Payne creates. David’s overweight twin cousins go from couch-potato hayseeds to quasi voices of reason, their mutual obsession with driving fast over long distances becoming less a running, Nascar-y gag than a commentary on David’s comparative rudderlessness. And in an explosive scene that tectonically shifts the tone and direction of the movie, with extended relatives getting wind of Woody’s “fortune” and begging for handouts, and the immediate Grant family being forced to band together, Kate morphs into someone enticingly enigmatic—a loving wife whose initial criticisms of her husband’s laziness are suddenly replaced by intimations of his hard-working past. Such is the point where Squibb’s performance becomes as revelatory as Dern’s, and a moment that, rather than reading as contradictory, registers as the profound unearthing of great care masked by decades of sarcasm.

When it comes to portraying the locals of his own provenance, Omaha-bred Payne may leave some sensitivity to be desired. But in Nebraska, the filmmaker’s overview of America is extraordinarily, multifariously profound. His mere perception of American iconography, and how its value echoes and evolves through generations, has a walloping impact. Already quaint and outdated, the signage of hotels, cafés, and gas stations fills Payne’s visual palette, and it’s regarded with more awe and reverence than a farm field or Mount Rushmore, which are criticized and de-romanticized by Woody, and, by extension, the film itself. It doesn’t take too long to realize that Woody’s certificate is the MacGuffin in not so much a family-bonding tale, but a capitalist fantasy. And as Hawthorne begins to unleash both vultures and well-wishers alike, including Woody’s bullying, lecherous former co-worker (Stacy Keach), and his tender, heartbreaking ex-girlfriend (Peg Nagy), all seem less interested in a piece of the man’s pie than the staunch assurance that the pie exists. Despite David, Kate, and Ross’s protests that Woody’s adventure is for naught, the Hawthornians will have none of it, if only so they can believe that such opportunities and happenstance riches are possible. It’s this perception that matters, right down to a perfect, tidiness-amending final sequence, which aptly stretches toward the horizon, and attests that the American Myth is the new American Dream.

Something Lucid This Way Comes: Robin Hardy’s The Wicker Man