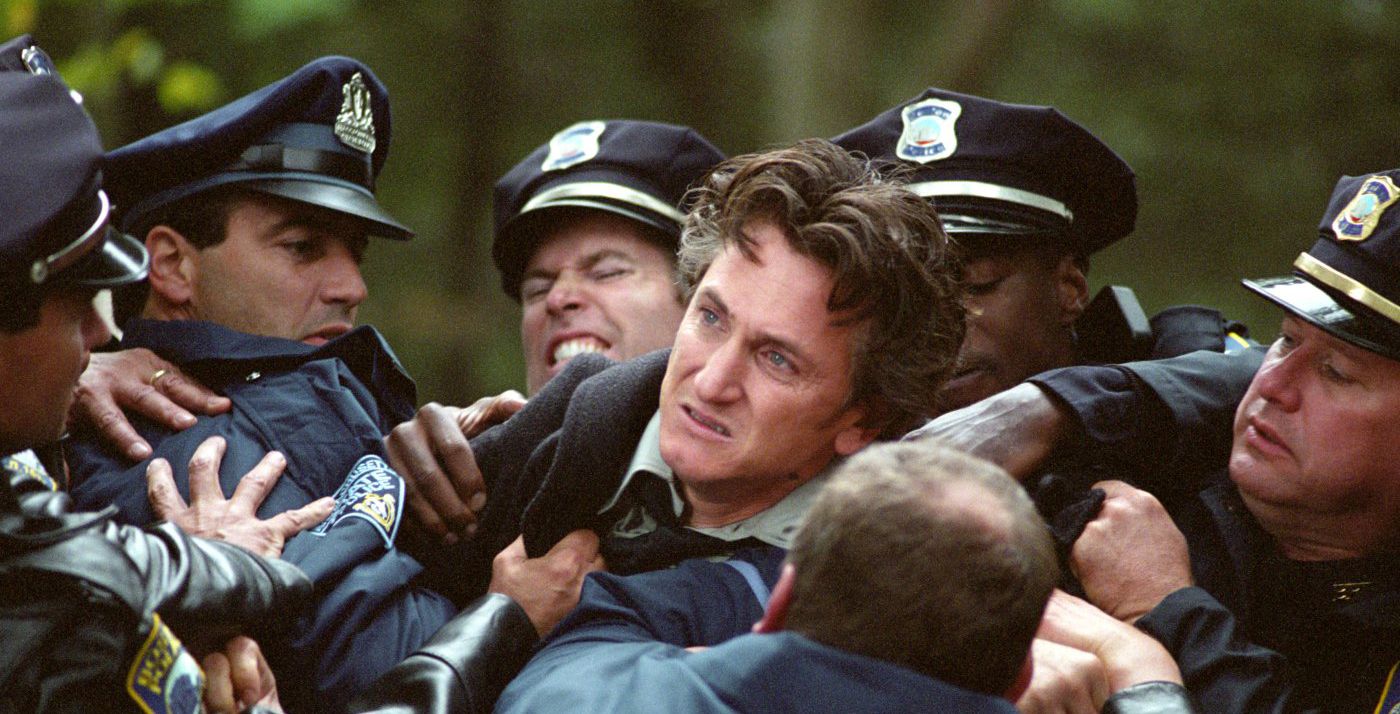 Clint Eastwood’s Mystic River is a somber evocation of a poor, close-knit section of Boston on the brink of moral collapse. Not only is the film the director’s best work since his undervalued A Perfect World, it’s also one of the most spiritually profound works to come out of the Hollywood studio system in quite some time. Mystic River shares more than a passing resemblance to Alejandro González Iñárritu’s 21 Grams. Both take place in god-forsaken milieus and feature Sean Penn playing the vigilante cowboy when the judicial system fails its characters or doesn’t do its job quick enough. But where Iñárritu’s frenetic style repeatedly betrays the inherent gravitas of his story, Eastwood sorts through the rubble of his characters’ lives with an assurance and patience that’s reminiscent of his better works.

Eastwood’s mystical tour through the film’s Boston town begins in the past, when a boy is stripped of his innocence by two wolves in sheep’s clothing. A “world of hurt” passes into the boy, similar to the legacy of pain that befalls ex-con gangster Jimmy Markum (Penn) when his teenage daughter is found brutally murdered in the present. Jimmy’s childhood friend Sean Devine (Kevin Bacon) is the homicide detective who investigates the possible involvement of their friend Dave (Tim Robbins) in the crime. Eastwood is very much concerned with the disintegration of society and the human spirit, perfectly expressed in the transition between the film’s idyllic past and hopeless, gentrified present. Just as the fates of the film’s three leads are forever tied by a horrifying event, there’s an overwhelming feeling here that the death of one person could mean destruction for the entire town.

Many scenes in Mystic River begin or end with Eastwood’s camera tilting toward the sky or looking down at its procedural. He observes the horrors of these people’s lives like the somber Mystic River that haunts the film’s periphery. If the film has an obvious cross to bear, there’s no denying the god-like nature of Eastwood’s gaze. There’s a distinct tenor to Eastwood’s films and Mystic River’s rhythm comes alive via a series of lyrical parallelisms. As a child, Dave got into a car with two men posing as authority figures: a police officer and a priest. History tragically repeats itself when an older Dave gets into a car with Jimmy’s thugs. Eastwood clearly believes that youth is holy and he uses this visual repetition to evoke Dave’s eternal damnation. More hopeful: a boy’s physical disability (his muteness) is compared to the emotional unavailability of Sean’s wife.

The performances are phenomenal across the board: Robbins never contrives schmaltz from his character’s arrested development; a haunted Marcia Gay Harden, as Dave’s perpetually frazzled wife, brings to mind a soul lost in limbo; and Penn’s hurt is sure to bring Academy voters to tears. The film has its ciphers (namely Laura Linney’s Lady Macbeth) and its fair share of summarizing speeches—but even when it appears as if Eastwood has given up on his characters for a series of red herrings, the lyrical editing of the film’s Shakespearean last act plays into the schematic idea that the film’s characters are merely fulfilling a predetermined prophesy of hurt. If Dogville is a ravishing autopsy of American terrorism, Mystic River is a heart-wrenching act of worship: a holy observance of the way evil spreads like a pestilence (specifically referred to as vampirism in the film) from the past into the present.