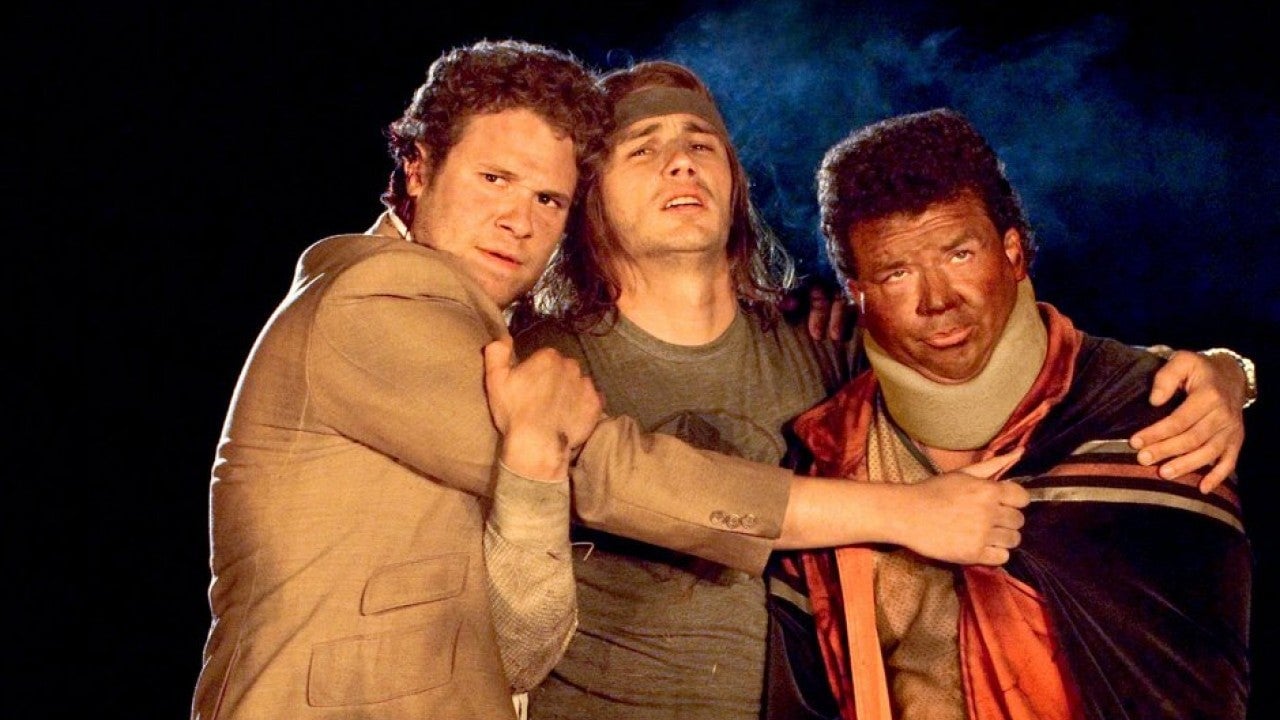 Pineapple express refers to a weather condition in which a jet stream of warm air from the region around Hawaii travels all the way up to the likes of Canada, bringing winds and rains. More importantly to Saul (James Franco), this occurrence allows one to grow some of the dopest dope ever smoked, a breed of potent weed so rare that he is the only dealer in town selling the stuff, which presents a problem when his client Dale (Seth Rogen) discards a half-finished roach of it at the scene of a brutal murder. Rogen, co-writer of the resultant film, has described Pineapple Express as Superbad crossed with Up in Smoke and Die Hard, with maybe a dash of 48 Hours. Sounds like an interesting ride, and it’s all the more intriguing with the addition of director David Gordon Green, the conductor of this particular train.

Seeing as how our heroes are constantly getting high, Pineapple Express toys with the idea that the film we are seeing is, in a way, the film in Dale and Saul’s heads. What events would occur if two stoners dreamed up an action movie? Well, despite feeling the effects of the most potent grass in the city, our heroes would be smart enough to calculate many of the villain’s moves. They’d get the opportunity to do some action movie stuff like kicking out a car windshield or performing some wire-assisted jumps. Events in Pineapple Express are supposed to occur as the two potheads would see them.

Yet I feel a bit cheated by this idea. To me, it’s more of a shield for criticism and an excuse for some clumsy writing. Am I allowed to point out that the film feels aimless at times? Well, stoners would probably make an aimless film. It’s also a tad sloppy in places, but I guess that should be expected, based on the characters who are “thinking this up.” It’s a very fine line to walk and I don’t think Rogen, co-writer Evan Goldberg, or producer Judd Apatow know where that line is.

After seeing Pineapple Express I came across the red band trailer above, released a few months back. Condemning a film because of a promising trailer is unreasonable, but the red band fulfilled a certain craving, and works much better with the “movie in their heads” idea. Exuding funk, texture, and some sweet beats, it exhibits the touches that I’ve come to expect from Green. His films don’t all need the flashy editing of Undertow for them to be successful, but the trailer is a taste of Pineapple Express’s potential, and I saw more in it than I did in the actual film. I suppose I was just expecting Green to somehow impose his vision instead of simply cashing a paycheck.

I know it’s unfair to criticize Green for catering to the industry. It’s understood that these sorts of “digressions” are a necessary evil, and he could do a lot worse than Apatow and Rogen, but I sense that his role in this project is like that of a guest director on an established TV series. He’s really just there to put his personal stamp on a couple of specific scenes, and then let the production run itself. A sweet montage of Dale and Saul, high as kites, playing in the woods, is a wonderful little Green-stamped interlude, the camera cavorting along with the two childish men in an innocent and poetic way. The entire film looks like it’s having fun, but this scene revels so much in the moment that the movie itself briefly becomes as high as its subjects.

The initial interactions between Dale and Saul will ring true to many, but as the film takes off, the heightened reality of its world makes it more difficult to find such sincere moments. In the end, the montage in the woods feels like one of the film’s few honest moments, evidence that the filmmakers are capable of an emotional authenticity that should never be ignored, even in a movie about pot.

Despite my reservations, Pineapple Express really isn’t a bad film. It brandishes the same odd, inappropriate humor that made Superbad such a hit, and mixes in a little of the subtle, off-beat laughs found in Green’s other movies. And even if the film doesn’t mesh too well as a whole, the humor works its magic in every individual scene (I laughed loudly and often). There’s some classic stuff in here, from Saul’s description of “Pineapple Express” (“Smell it. It’s like…God’s vagina”) to the demonstration of a cross-shaped blunt. But the film remains a disappointment. From Green to Apatow to Rogen and Goldberg, every major player involved in Pineapple Express has demonstrated that they are capable of smarter, more genuine content and, for me, their previous efforts have spoiled their most recent.

Review: Anita O’Day: The Life of a Jazz Singer