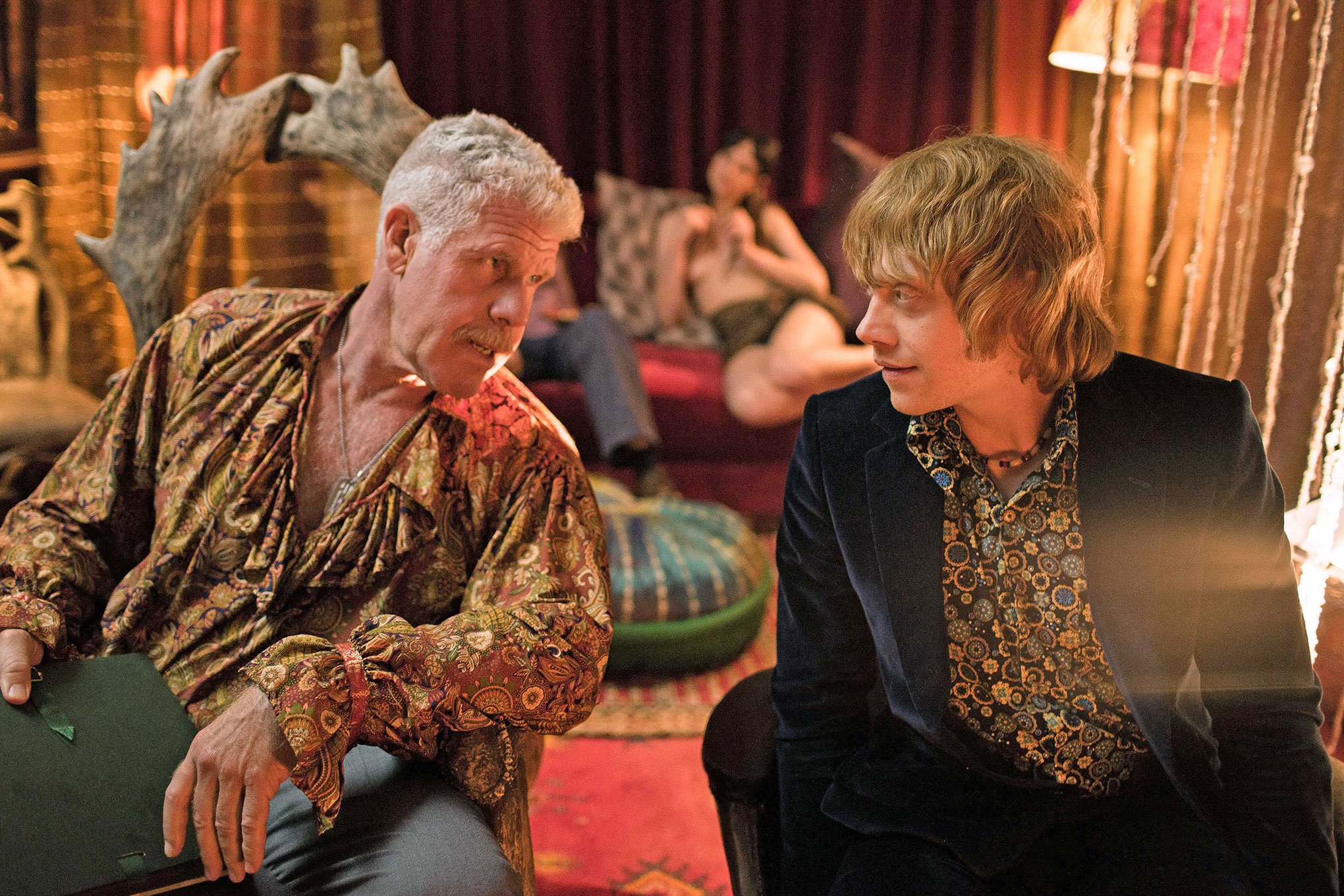 Ron Perlman commandingly strolls through Moonwalkers like a modern-day Lee Marvin. Perlman has a similarly large, rectangular build, which he moves with similarly compacted grace, and he possesses a clipped sense of comic timing that harks back to the sort of gloriously un-self-conscious tough guy that was more likely to turn up in the cinema of the 1960s and ‘70s than that of the present—the kind of man who might have been working as a bouncer or a mechanic before Hollywood came calling. But there’s an element of absurdism, of playfulness and even gentleness, that’s his alone.

Moonwalkers wittily uses the actor, positioning his expressive manliness as an embodiment of the secretive American government of the 1960s. Perlman’s Kidman is a C.I.A. agent haunted by flashbacks of the atrocities he witnessed and committed in the Vietnam War, which director Antoine Bardou-Jacquet stages as cheeky comic-horror punchlines, visualizing Kidman’s ghosts as lurid monsters that are contrasted against Kidman’s movingly dazed mug.

The U.S. military pulls Kidman out of hiding to give him an assignment: to fly to England and recruit film director Stanley Kubrick in order to stage a fake Apollo 11 moon landing, in accordance with many real conspiracy theories. Apollo 11 is presently heading toward its destination, but no one thinks it has a chance of accomplishing its mission, though there’s no way in hell that Russia will be allowed to publicly win its fraught space race with America.

Kubrick has recently released 2001: A Space Odyssey at this point in the narrative, and though Kidman’s superiors tell him that the film doesn’t make a lick of sense, its special effects are astounding. Kidman isn’t emotionally ready for his assigned task in the wake of his tours of duty, which his superiors interpret as homophobia against what they assume Kidman perceives as a rampantly “queer” British society. Don’t worry, Kidman’s superiors tell him, the British just seem queer because of the way they talk and such—an observation they pointedly offer in front of a British government official. (Kidman’s most prominent leader is played by Jay Benedict, and he’s clearly channeling the crazed, paranoid machismo memorably emitted by Sterling Hayden and George C. Scott in Dr. Strangelove.)

The Kubrick references abound in Moonwalkers. Kubrick’s agent, Derek (Stephen Campbell Moore), resembles Peter Sellers, and Moore plays him in a broadly ingratiating key that’s suggestive of Sellers’s performance in Lolita, which is later namechecked by a character who’s uncomfortable with its perversity. Derek’s office is also equipped with a coffee table that would be right at home in A Clockwork Orange, before Kidman smashes Derek into it. These references are fleet and relatively subtle. The more interesting conceit, however, is the juxtaposition of Kidman’s old-school, ultraviolent code of honor against the British counterculture, which is presented as a fraudulent fusion of Andy Warhol’s Factory and a debauched, wooded ranch-land party scene that’s too stoned to ever entirely evolve into a proper orgy.

With little warning, Moonwalkers morphs into a head movie, before indulging yet another bloodbath that closes the narrative on an uncertain note indicating the instability of the myths we sell ourselves as history. The whole isn’t greater than the sum of its parts, but the various detours coalesce into an amusing wannabe-cult curio.