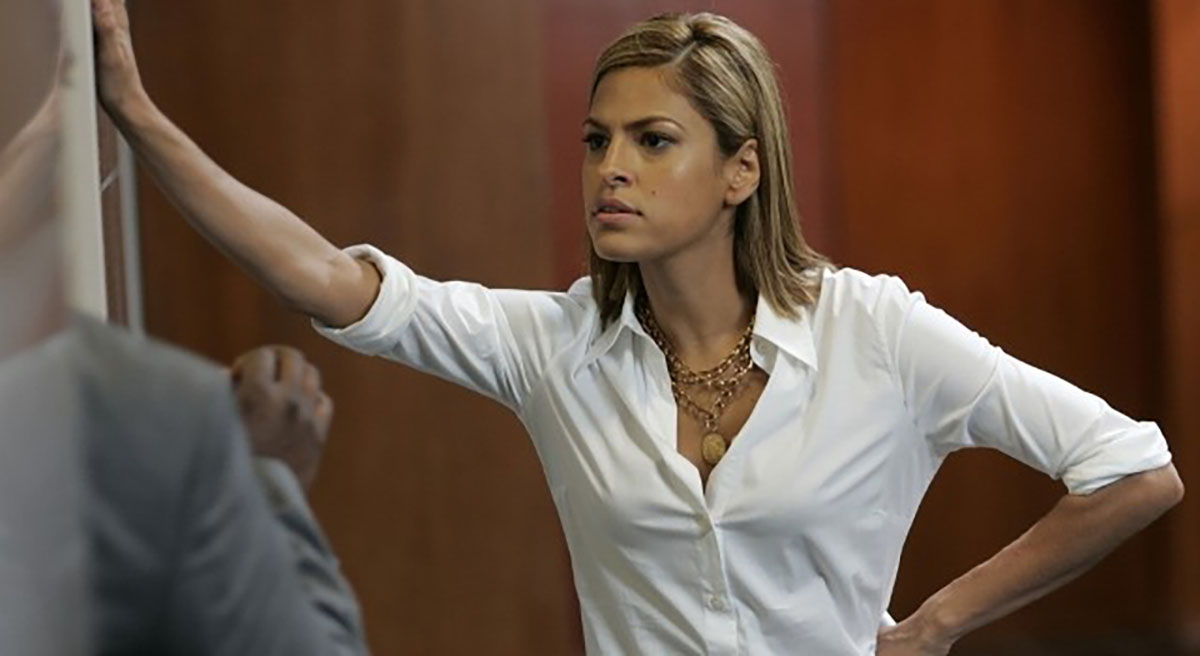 To hear Eva Mendes’ television network director, Katy Courbet, pronounce the word “indelible” is to bear witness to the end of civilization—the woman could no more move a room of stolid ad execs to tears, as she does in Bill Guttentag’s hi-def mockumentary-cum-toothless satire Live!, than induce a famished canine to sit up and sing for its supper. (So spake that prescient philosopher Julie Brown: “Just be vague, there’s nothing to it.”)

This is less a slight against Mendes’ performative abilities (the lead actress/executive producer comes off much more intelligently, if still somewhat obsequiously, in her interview with our understandably flustered Reeler colleague S.T. VanAirsdale) then it is against whatever cruel, vengeful god decided to intermingle the genetic codes for sentence structure agility and Barbie Doll vapidness. But we can only curse the heavens for so long…

Guttentag’s background as a documentarian (Nanking, his co-directed feature on the Japanese occupation of China, also screened at Tribeca ’07) ill-serves him for Live!’s not-so-far-from-our-own-times premise, wherein a gaggle of desperate and/or attention-seeking souls compete on a televised game-show version of Russian Roulette. Save for one sequence (photographed from the cleavage-clandestine perspective of a button-cam), the whole of Live! has the same homogenized crisp ‘n’ flat texture. Would that it seemed more of an intentional choice, an antiseptic, dystopian vision on the order of Stanley Kubrick. Instead, it calls attention to the fictive contrivances, to sequences that could never be captured on the vérité fly, nor screened without limitless legal reprisals, especially in light of the closing declaration by Live!’s fictional documenter (David Krumholtz) that he now works “for the network.”

The game show itself is effective only in so far as Russian Roulette (with its near-unimpeachable promise of bloody outcome) lends itself to the crude, brutalizing mechanics of suspense. But a jangle of the nerves does not necessarily equal an enlightenment of the soul. Live! is L.A. intellectualism writ large, a feeble fire-and-brimstone sermon preached to a San Andreas-teetering choir, its wittiest stroke the casting of Running Man director Paul Michael Glaser as a network head; its smartest the involvement of Homicide-late Andre Braugher as a slick, yet morally troubled lawyer; its eye-candyiest the inclusion of Jay Hernandez as the most endearing game show contestant (poor, Hispanic, and gay!) this side of Sanjaya Malakar. On that last point I will allow the glories of digital to speak for themselves, second from left:

Keith Uhlich is managing editor of The House Next Door, a staff critic for Slant Magazine, and a contributor to a variety of print and online publications.

Review: The Guns of Navarone

Review: To Catch a Thief