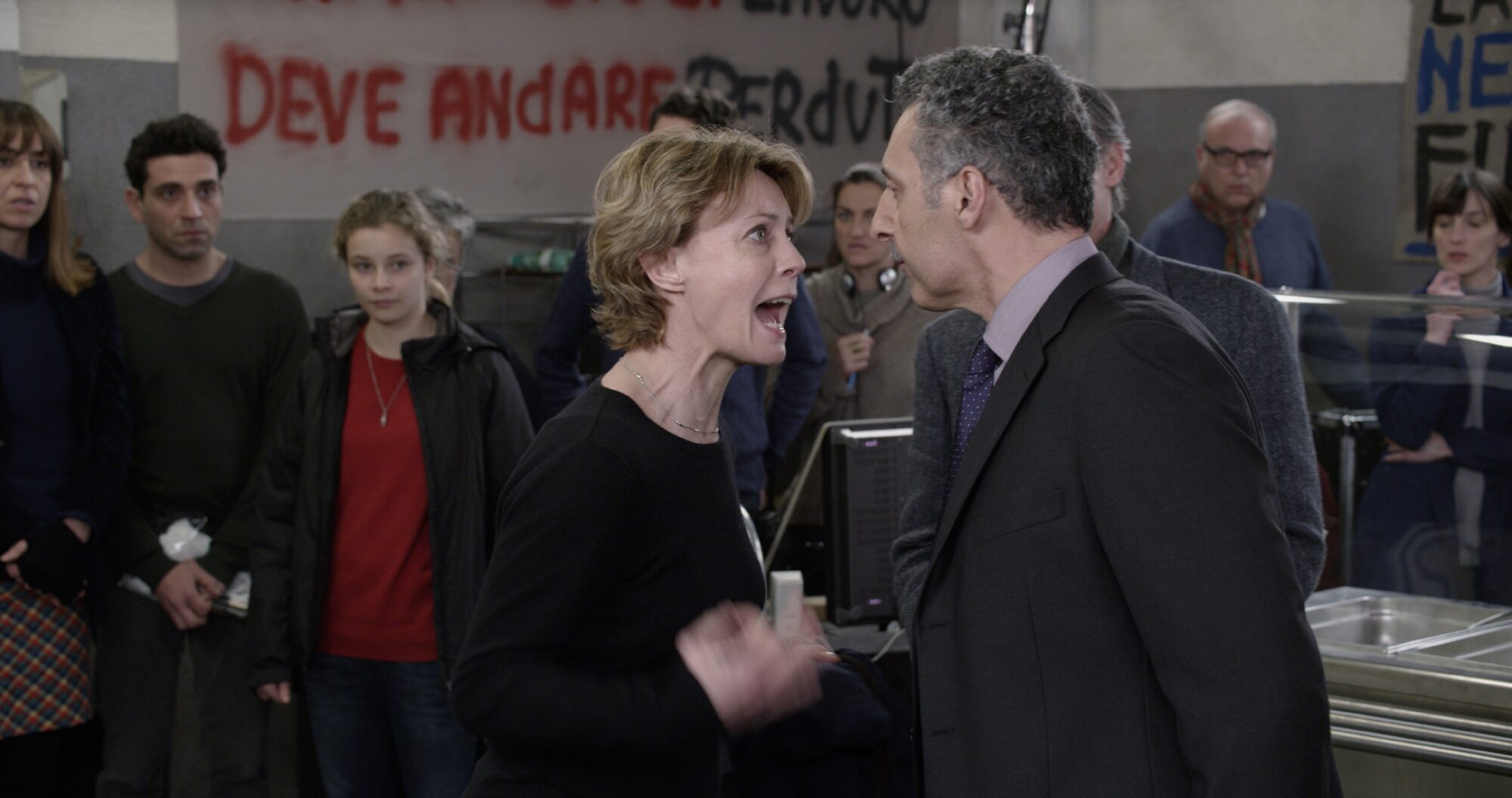 Nanni Moretti’s latest, Mia Madre, centers on a middle-aged director, Margherita (Margherita Buy), whose challenges while making a new film distract her from the painful reality of dealing with her mother’s life-threatening illness. Moretti, whose previous films include the highly autobiographical, tongue-in-cheek Caro Diario and the comically offbeat We Have a Pope, tempers wittiness with melancholy throughout. Mia Madre is carefully measured and satisfying, albeit occasionally tone-deaf, suite of fleeting, dispersed impressions, some as delicate as an empty yogurt cup by Margherita’s mother’s hospital bed, or an image of elderly hands being massaged and caressed. While some of Moretti’s films are talky and even occasionally sly, this one’s written in a minor key.

The film’s narrative revolves around Margherita’s squabbles on set, her making calls to the hospital, and her and her brother Giovanni’s (Moretti) regular vigils by their mother’s bed. Margherita’s constantly alleged self-absorption sometimes jars strangely with her self-reflexivity, leaving Buy’s teary-eyed face to coyly hint at the aches the character hides within. Buy and Moretti, though, share a wonderful, low-key chemistry that conveys the intimacy between their characters, and without resorting to theatricality. Margherita, wrapped up in the exigencies of directing, conveys fragility and guilt over her absences from her mother’s bedside, while Giovanni is the steadfast one, reversing the usual scenario of women as primary caretakers. In one scene, Margherita rushes to bring take-out to her mother, only to discover that her brother has already cooked an elaborate meal. The disappointment of being easily replaced mingles with relief, adding to the scene’s complexity.

On set, Margherita falters and asserts herself, in turns, as she navigates her professional relationship with her film’s American star, Barry Huggings (John Turturro). Turturro is touching in his role as a second-grade Hollywood actor, both eager to aggrandize (or to plainly make up) his achievements, but also refreshingly down to earth and pragmatic. His evolving character is perhaps the best example of how Moretti can take an explosive situation, such as a quarrel between Margherita and Barry on the set, and then diffuse it, showing them dining together with Margherita’s family. The constant flow of energy in the film—the building of tension and its subsequent undercutting, thus emphasizing discontinuity and dispersion over cohesion—reflects beautifully how acceptance of adversity, or the building of trust, may happen in real life.

This sense of ebb and flow is perhaps the most winsome aspect of Mia Madre. Moretti is always on a search for the surprising and the quirky, and his interests often fall somewhere between parody and drama. In the case of Turturro’s character, the initial moments of off-putting cartoonishness are justified as Barry eventually reveals his own feelings of inadequacy. At other times, though, the varying tones can make for off notes; as Margherita’s mother’s illness accelerates, the gentle banter between the siblings, such as the off-handed remarks about Latin grammar (the mother’s pride and expertise), gives way to laden eulogies from students coming to visit.

Mia Madre’s meta-frame is cinema itself, the undeniable magic of make-belief compensating for life’s real agonies. But in spite of repeatedly returning to the set of Margherita’s new film, Moretti is ultimately more invested in the family drama behind the scenes than he is in the unfolding of the film within the film. The latter, about a protest of Italian factory workers who stand to lose their jobs, hints at Italy’s continuing economic woes; it shows Moretti’s desire to situate his drama in a broader context, but, in the end, is only vaguely sketched out, with little scene work or dialogue to merit full attention.

But in its quieter, more earnest moments, the film emerges as a deeply affecting reflection on solitude. There are different gradations of it in Mia Madre: the solitude of a woman on a set filled with men, which causes Margherita to question whether her crewmen revel in violence more than necessary; the solitude of a filmmaker whose ideas and impulses get inevitably dispersed in production; and finally, the existential solitude of coming to terms with a parent’s imminent passing, and thus, with one’s own middle age. Moretti, early on, fills his humanistic comedy with mundane conversations and routines that show just how much relief we draw from the familiar, even in the most painful situations. He understands that, when humor doesn’t abandon us, it becomes a source of strength.

Review: He Named Me Malala