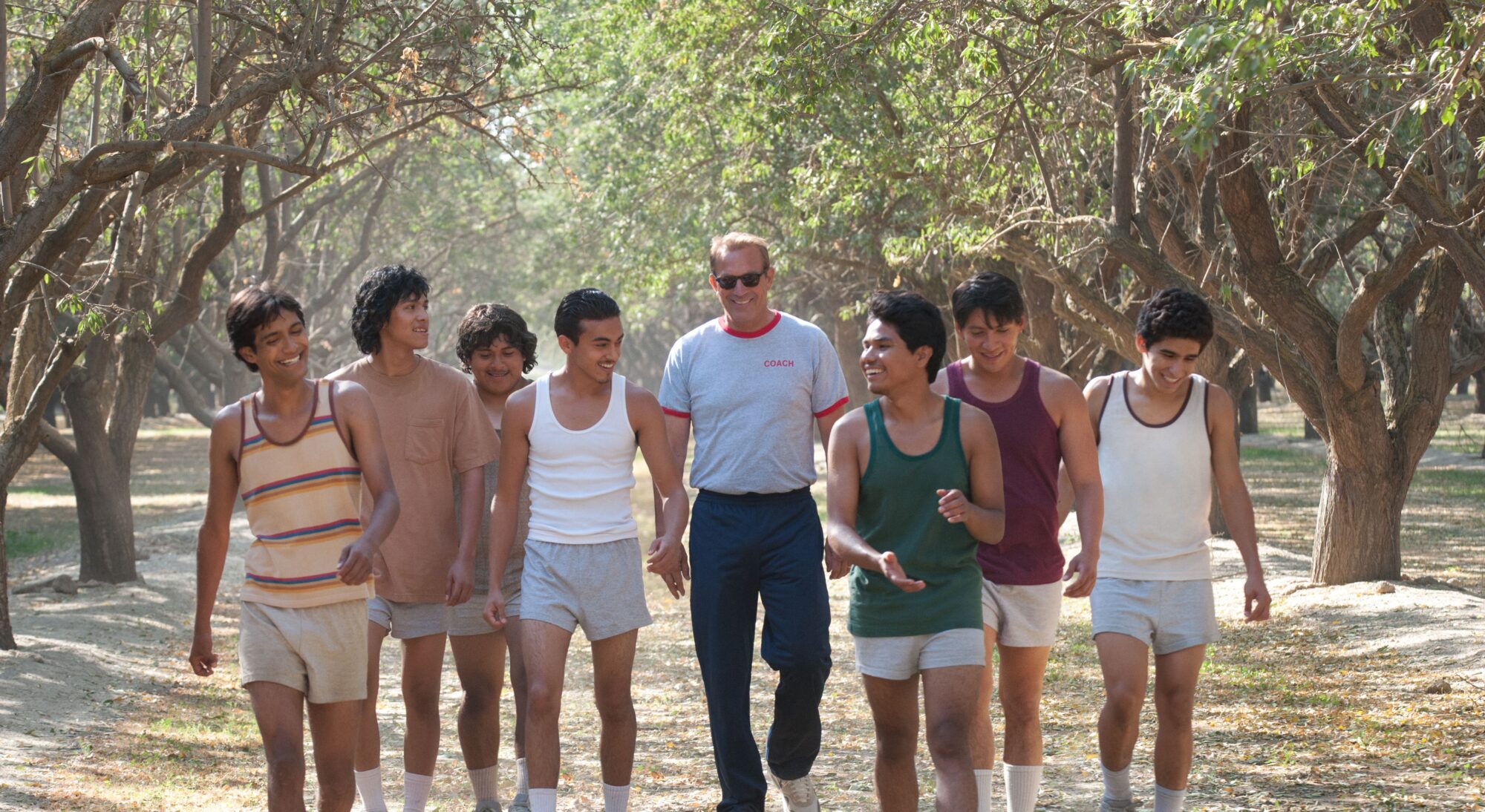 The glaring omission of the title of Niki Caro’s McFarland, USA, set in 1987, is California. To be more specific, the southern part of the Central Valley, where a great deal of America’s almonds and other assorted goods are grown and picked; it’s also where California gets most of its petroleum. As this absence infers, however, interest in what the land means to the state is limited in Caro’s sports drama, which focuses on Jim White (Kevin Costner), a high school coach kicked off his previous gig for being too rough with over-privileged suburban teens. In McFarland, White not only finds a calling in cross-country coaching, but also comes to understand the privileges of his race and upbringing. The problem is that the film is clearly more interested in the rote familial bickering between White and his family, and how they experience and come to embrace the cultural touchstones of their predominately Latin American community, than it is in the quotidian work, relationships, deals, and indiscretions that’s kept the community of McFarland so tight-knit over the years.

To that end, the film’s key scene comes early on, after White’s cross-country team has lost their first race. His runners are doing laps among tarp-covered hills, which one incensed runner, Thomas (Carlos Pratts), reveals are piles of almonds that are the product of the community’s oft-belittled drudgery. The message couldn’t be clearer: This is my family and friends’ hard work and you’re using it, quite literally, for sport. It’s a moment of righteous indignation, and it’s as close as the film ever gets to a rough truth about how predominately white businesses and cushier jobs are dependent on brutal, thankless physical labor done almost exclusively by Latin Americans. (The question of their legality as citizens is, shockingly, barely broached.) The film depicts the hardships of poverty and race with kid gloves, such as in the work-centric home of Danny and David Diaz (Ramiro Rodriguez and Rafael Martinez), a pair of brothers both racing under White. In Thomas’s home, he gets the brunt of the physical abuse from his father following the announcement of an unexpected pregnancy. Thomas’s father’s anger stems from a confluence of poverty, cultural disorientation, religious duty, and masculine roles, major concepts that McFarland, USA touches on, but ultimately disregards in favor of an unrelenting reiteration of the importance of family bonds and values.

The film, which spans McFarland’s first championship year on the cross-country circuit with White at the helm, can occasionally feel a bit too much like a realization of Thomas’s very worst fears. The story of a team of poor Latin-American students, from a variety of unexplored backgrounds and nations, becomes more the story of a middle-aged white guy figuring out how good he’s got it. A great deal of the film’s first half involves White realizing that his initial, mildly racist views were unfounded, but the script ends up celebrating his willingness to look past stereotypes more than considering why those views were there in the first place. With one blink-and-you’ll-miss-it exception, every white person depicted in the film that isn’t a sanctified White is either a racist or superciliously mean to the McFarland team, a trend in a script that renders much of its drama one-note.

If there’s a general air of emotional authenticity woven throughout all this garden-variety, faith-in-family hokum, it’s in the racing scenes. Caro expertly cuts between the physicality of the athletes and the imposing landforms they must conquer, giving a genuine sense of the exhaustion, pain, and mental wherewithal that goes into the sport. She thrives on capturing the unique joys and machinations of small, specific communities, but the script allots only so much time for her to explore the distinct routines of any McFarland family, including the White clan. The film is ultimately not about this small community of struggling families or the “superhuman” abilities, as White calls them, of these tremendous young men, but about congratulating America for proverbially outrunning racism in this single instance. The state that McFarland is in doesn’t matter, but then neither does the name of the town, as McFarland, USA is ultimately little more than an advertisement for Anytown, U.S.A.