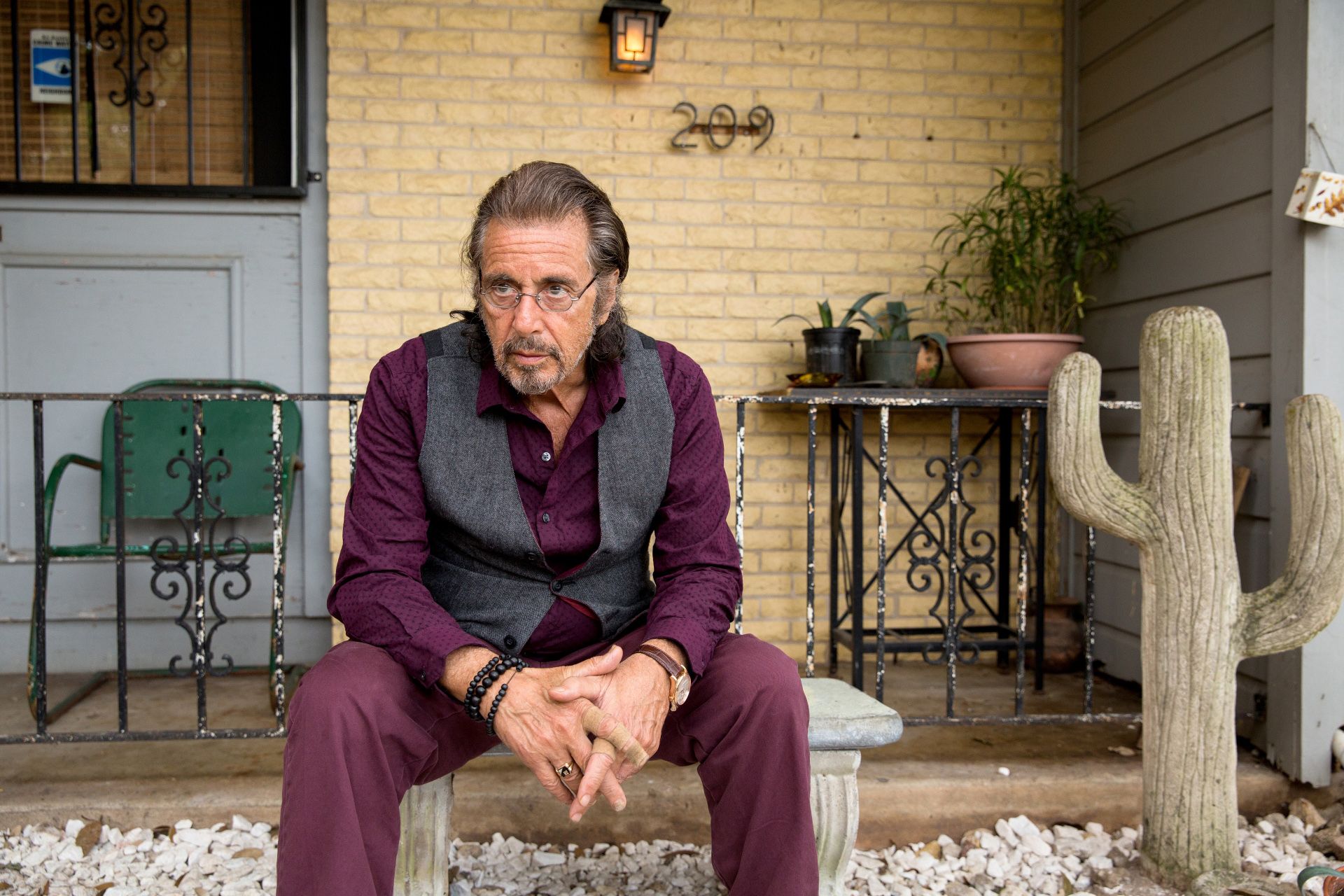 Like Marlon Brando and Dustin Hoffman, Al Pacino shows his work to the point that even casual filmgoers can see him acting with a capital A, right down to the tiniest gestures. There’s a reason why Pacino is always tasked with playing great men who live as the sole citizens of their own self-absorptive orbit: His acting operates in a similarly rarefied sphere, naturally syncing up symbolically with whatever abstract accomplishments his characters are said to have achieved. Pacino’s a brilliant performer, even in the looser lounge-lizard roles that have occupied much of the last three decades of his career. But he doesn’t connect with other actors anymore, as he’s forever occupied with performing a duet between his present self and the baggage of his iconography.

In Manglehorn, when Pacino’s character waits in line at a bank, one doesn’t see the embittered, socially estranged titular locksmith, but the actor playing a locksmith. He can’t even hold a cup of coffee and a donut in his hands without making a casually eccentric show of it. Not to mention Manglehorn’s voice, which is born of a robust man’s abstract approximation of world-weariness, or the character’s method of dress, which includes a vest and a trench coat that visually liken him to Ian McShane’s character in Deadwood, or his physical carriage, which consists of a hunch and a stumble that still somehow scan as coiled and powerful. Pacino doesn’t wring his hands over the distancing stylization of his acting though, and that’s what makes him great. He turns behavioral minutiae into pop art that celebrates the extravagant joy he takes from performing.

Pacino’s the perfect actor for this phase of director David Gordon Green’s career. Prince Avalanche, Joe, and Manglehorn are all built on a formal arrangement of three presiding contrasts. The big presences of well-established stars play against subtly textured “found” settings, which are heightened by aural/visual poetry that merges them, suggesting the internal larger-than-life dreams that bubble up within working-class people who live as tree-cutters, tree-poisoners, locksmiths, mechanics, and bank tellers, or who’re retired and now define their social lives by the weekly pancake breakfast at the VFW down the street. These convergences of expressionism and verisimilitude occasionally suggest a lo-fi impression of Martin Scorsese remaking a John Cassavetes or Robert Altman movie.

Green stages even fleeting tonal palate cleansers with a self-consciousness that parallels Pacino’s acting. When Harmony Korine appears, for instance, as a hustler who Manglehorn once coached in high school baseball, memorably referring to the old warhorse as “Mangle-horny,” you’re aware of everyone’s awareness of these scenes as “bits” that are intended to offer a little behavioral vaudeville, as well as a reprieve from the relentless heaviness of Pacino and Green’s loneliest-man-in-the-world routine. Green’s self-consciousness, however, is distinctive from the glib self-awareness exhibited by filmmakers of his generation for its refusal to cop-out from dramatic conviction, as it actually intensifies his films’ earnestness, which springs from a desire to capture something unique and surprising about the various hidden crannies of melting-pot America.

Narratively, Manglehorn is another of Pacino’s asshole-redemption fables, in the tradition of Sea of Love, Scent of a Woman, and the recent Danny Collins, in which his emotionally shut-off protagonist must learn to love again. Green uses that basic story as a pretense for throwing all sorts of symbols and anecdotes at the audience, showing us the world that Manglehorn’s bitterness is shutting him off from. In this fashion, Green mildly questions our inherent attachment to Pacino’s archetypal narcissist, loving him and ultimately affirming him, of course, but with qualifications.

Green sometimes suggests a figurative splatter painter, searching for reverberations in the unexpected. Occasionally splatter is literally involved, such as in a scene in which Manglehorn strolls against a remarkable tableau of a multiple-car pile-up, which is surreally strewn with smashed watermelons that tumbled out of one of the damaged vehicles, coating the scene of the accident with innards that simultaneously suggest gore and bright, passionate drops of red paint. Other scenes resonate on the rebound, such as when Manglehorn happens upon a group of men dancing in the woods, or, most spectacularly, when a man enters a bank holding a bouquet of yellow flowers, singing to everyone inside but especially to a female manager. One’s primed to see the man thrown out for disrupting the peace. In a beautiful punchline, the woman sings back to him. Manglehorn, on the sidelines, as always, says the singer isn’t bad, but he’s deliberately missing the point. The film’s about him recognizing such acts for the emotional bravery they truly are, and allowing himself, after a fashion, to stage his own.

Interview: Wallace Shawn Looks Back at My Dinner with André and More