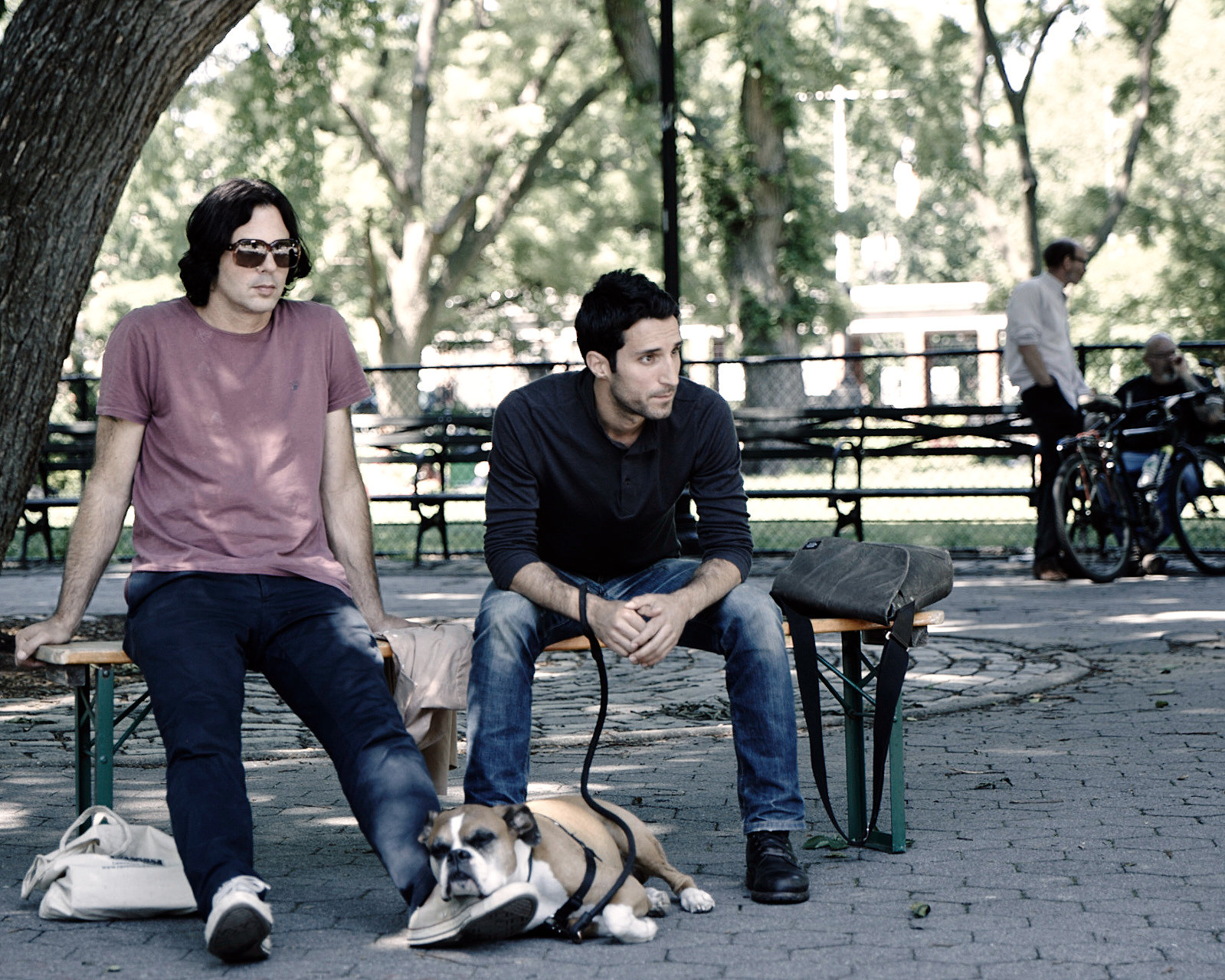 Two out-of-work actors searching for a new project, Michael Godere and Ivan Martin, took matters into their own hands when they wrote the feature-length screenplay for Loitering with Intent, with parts for themselves and their two famous friends, Marisa Tomei and Sam Rockwell. The story, about two out-of-work actors, Dominic and Raphael, attempting to write a screenplay on a 10-day deadline, suggests art imitating life, but the rest is playful fiction. The film is an intimate exploration of the dynamics of both the creative process and relationships in general, shining a rare light into what our own Chuck Bowen described as a “fleeting paradise of camaraderie and heartbreak, which at least offers proof of capacity for feeling.” I had the chance to chat with actor-writers Godere and Martin, their stellar co-stars, Tomei and Rockwell, and director Adam Rapp about their years-long friendships, tricks of the trade to keep the energy high, Raymond Chandler Easter eggs, and more.

As you’re all friends, I imagine the film’s script came organically?

Ivan Martin: Yes and no. We were unemployed, of course, more than these guys [gestures to Marisa Tomei and Sam Rockwell], like most actors are most of the time. We had written a little bit on a film before and we decided that we really liked that experience and that we’d like to do it again. We had these guys in mind. They’re amazing actors. They’re very smart. They’re also very busy, so we didn’t know if they would be able to do it or would want to do it, but that was the hope. Michael can do all of their voices, so it was as if they were in the room while writing.

Michael Godere: Obviously the foundation of our friendships and our love and curiosity toward each other were certainly a giant influence and foundation even for the story. A lot of it is fictionalized, but a lot of it, too, is stuff we wanted to see them doing and wrote for them. Stuff they might want to do and then continuing to pull from the circuitry that gets our group flared up when we’re together—to get that into the narrative as much as we can.

I heard there was a road trip involved in the writing of the screenplay.

Marisa Tomei: Yeah, that was later on.

Martin: We did workshop with Marisa and Sam, and Marisa has been really helpful along the way in that regard. She spent a lot of time with us, and one of the more fascinating aspects of our writing together was the road trip. She drove really quickly and worked as she drove. Marisa really helped shepherd us through a lot of rewrites, both encouraging and critical, very critical. And Sammy, we were constantly wanting to know what they thought. Going and reading scenes, maybe chunks of scenes, or sending them pages, to see what they thought.

Sam: I came in later in the process, after Marisa. They were nice to cater to what our artistic agendas were as far as to what kind of parts we wanted to play. I was doing a play up in Massachusetts and they saw it and it was kind of more of the kind of stuff I wanted to do, so they incorporated some of that. I mentioned military or Navy SEAL and they incorporated that. They talked about Rumblefish.

Martin: And the depth and breadth of Marisa’s intelligence was something I wanted to get more of in my movie-going life. So we attempted to give her a platform to shine on in that way. And Adam, when he came along, being someone far more experienced than we are as writers. He worked on it with us. Everybody had their hand in it.

With those relationships, there’s such comfortableness on screen. Specifically, those more physical moments like when Sam’s character has Michael’s in a hand-lock and when Marisa’s, let’s just say, greets Ivan’s character…

Rockwell: You jump on him.

Martin: They scream into each other’s faces.

Rockwell: Yeah, well, these guys have known each other a long time.

Did you rehearse a lot of that?

Rockwell: Yeah, we rehearsed a bit of that. We came up with the thing for the arm hand-lock. Adam helped us with that as we didn’t have a stunt choreographer. That’s another thing that’s so generous about these guys. I’m not a scary person, and they give me that status.

Martin: We had been rehearsing for a long time. Even that mouth scream whatever.

Godere: Even the road trip we took, it was like the movie. I was outnumbered, vetoed. They were screaming into each other’s mouths and I was like, “Guys, watch the road.” Like that energy.

Tomei: But Adam was also incredible, like when you know you have someone there guiding, choosing, making sure you’re staying on track, that’s what it takes to make you not rehearse.

Adam Rapp: The whole fun of it is that they have such rich relationships already. If you’re a director worth his salt, you can find little activities to give them or to just suggest tiny things, but there was so much that was already there. And they were already affecting each other’s nervous systems in such a cool way. It was really about giving them the right space to play in and making it a safe place. Little tiny things. Like, I remember when we were rehearsing at our house, there was this scene with Ivan and Sam’s characters and it’s their first encounter and I said, “See if you can do three circles around.” It was a way of getting the molecular energy around in the scene. But beyond that, it’s all their rich histories with each other.

Rockwell: Adam had this thing he had me do [whistles and snaps fingers in front of Ivan’s crotch] at Ivan’s crotch. And I latched on to it. And Ivan would do this giggling thing.

Tomei: And you still kind of love it.

Martin: Thanks a lot by the way. I saw people at Christmas and everybody was, like, “Hey, I loved your movie.” [Whistles and snaps fingers in front of crotch.]

Rockwell: It was this creepy, nervous energy, and Ivan was doing this laughing thing. He was great, with this nervous laughter and it carried over. It was really cool. It was really fun.

Rockwell: You made me scary.

With four of you producing this film, were there any logistical issues as first-time [Marisa, Ivan, Michael] and relatively new [Sam’s third film producing credit] producers?

Martin: Lars [Knudsen] and Jay [Van Hoy] were also producers on the film. They have also done one of Marisa’s recent movies.

Martin: As well as many other films. They were handling most of the day-to-day logistics.

Tomei: These guys had a vision so that they had a great communication with Lars and Jay and Tori [Lenosky].

Martin: They were helping us create that vision.

Tomei: I don’t even mean artistic vision, but also you don’t think of it as producer-related, because there are things like how should the atmosphere on the set be or how do we want to eat lunch. Really silly things. There’s shitty food [on many films] and it really brings you down at lunch time. Just let it be beautiful and bountiful. It doesn’t have to be the most expensive budget, but let’s have it be the way we like to eat. A little more Mediterranean-style, family-style.

Martin: Some Gingham tablecloth on the craft service table.

Rockwell: The costume designer, Arjun Bhasin, is an old friend of ours. He’s hilarious because he wouldn’t take shit from us because he’s known us for so long and I’d say, “Arjun, what do you think of this jacket?” No. “But I think I should wear this. I think it would be cool.” No, no. And he could talk to me like that because he’s known me since I was in my 20s. He’s delightful.

Tomei: So he curated, picked and chose from our wardrobes, and showed up with some new things.

Rockwell: It’s amazing what a great costume designer can do.

Tomei: It really unlocks a lot.

Rockwell: One piece can set the whole character.

Are you all thinking of working together again soon?

Martin: He said no, but we want to continue the magic bus. We have a few projects in mind.

Godere: With the same gang.

What sort of themes? Would you also be exploring relationships?

Godere: Probably, for me, always with relationship themes. Character-driven, or relationship-driven, but we also have some ideas for thrillers and more comedy.

While asking that question, I just thought of how amazing it would be to get this gang back together theoretically for a play, off-off-Broadway, with you two actor-writers and Marisa again as the supportive sister.

Tomei: I like that. And with the playwright in residence [Rapp].

Martin: There’s a movie about that. Birdman beat us to the punch.

Right, but there’s such an amazing, unique energy between all of you on screen.

Martin: Thank you. Yeah, we want to make this happen.

Godere: It’s something. That’s a great blueprint to be destined for.

Godere: To work with people that you have so much fun with, and admire and inspire you.

That’s really interesting, considering all of the references to Ingmar Bergman in the film, and his troupe of players.

Godere: Yeah, absolutely. And that gives you a shared history, language, a shorthand, so when you’re writing for them, when you’re acting, it makes all of those directors who work with the same people, makes their films so rich. They’re constantly upping their game with them. If I could just be doing that, I would be really happy.

Martin: Those were his first two short stories, and the magazine that first published it. The way you were talking about Bergman and how those things filter through, I wonder how that will come up to the surface too.

Godere: Well, maybe now it will, for readers of Slant.

Review: The Boy Next Door