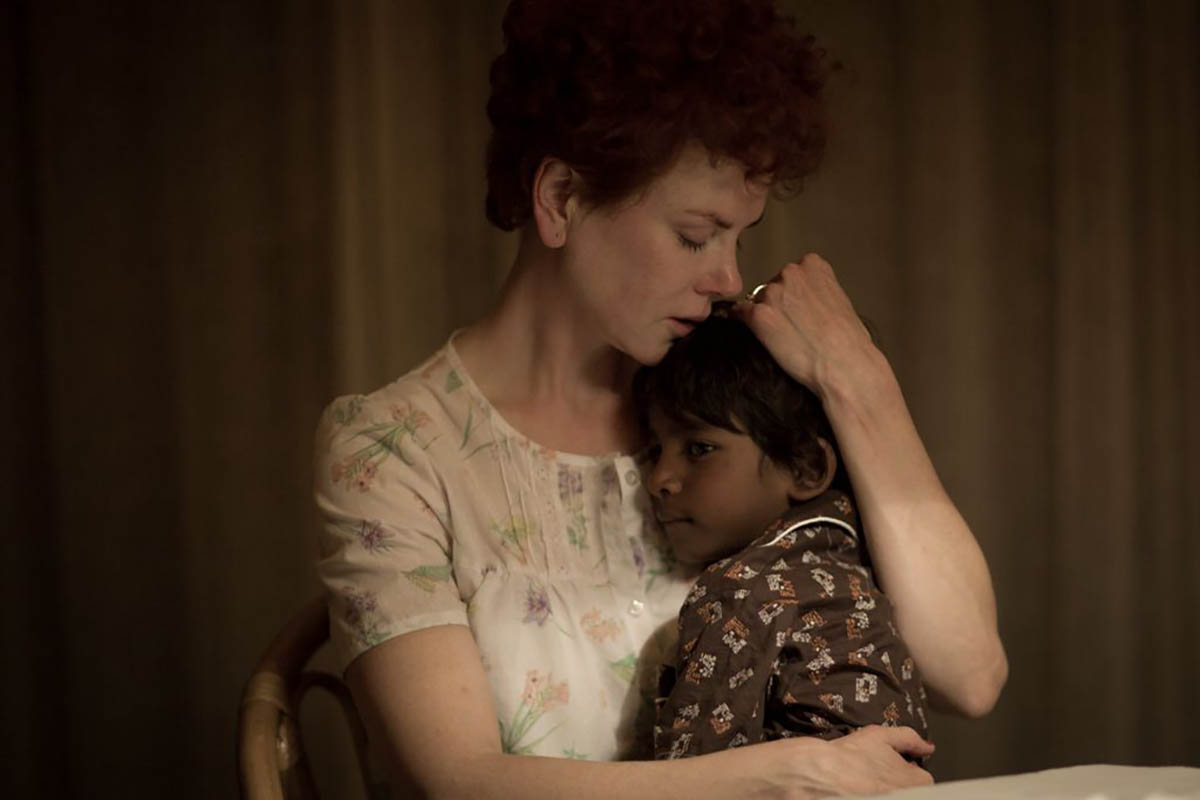 Emerging from sleep on a decommissioned passenger train somewhere between Madhya Pradesh and Kolkata, five-year-old Saroo (Sunny Pawar), separated from his brother, Guddu (Abhishek Bharate), rightly panics, the locomotive’s whistle enveloping his screams. Twenty years later, emerging from the sea off the coast of Australia, the young man he’s become (played by Dev Patel) is the picture of calm, sleek and stoic in a jet-black wetsuit despite the crash of the waves. Garth Davis’s Lion depicts much of the journey between these two moments, and then turns to Saroo’s quest to retrace his steps, but it’s their juxtaposition that signals the film’s central purpose, which is to construct a character poised between two places, two selves. A staunch melodrama, imperfect but undeniably moving, Lion is riven by images of one man’s two worlds, and propelled by his need to suture them together.

On the strength of Pawar’s winsome, puckish performance, exhibiting his might by lifting a chair, then a bike, before striking his chest with his fist, the film’s first act sets the fearful particulars of Saroo’s story—street urchins, human traffickers, a positively Dickensian state orphanage—against the boy’s keen intelligence, ably navigating between oppressiveness and triumphalism. The boy is trapped aboard the train until it reaches its destination, 1,500 kilometers away from his home, and his nighttime adventure with Guddu segues into a nightmare of lost children and bureaucratic neglect, yet Davis approaches his subject tenderly; when Saroo mimes slurping soup to a man in a restaurant window, the warmth of their connection offers a merciful glimpse, however fleeting, of kindness in cruel circumstances.

As adapted by Luke Davies from Saroo Brierly’s memoir A Long Way Home, Lion’s deft handling of the child’s externalized emotional states, muting the familiar excesses of similar sagas, nonetheless seems too restrained, even chilly, when the film flashes forward to Saroo’s adulthood. Adopted by a devoted Australian couple, John and Sue Brierly (David Wenham and Nicole Kidman), Saroo comes to embrace both his new parents’ heritage and, after a fashion, their quiet reserve: When he decides to search for his biological brother and mother (Priyanka Bose), he’s so protective of the Brierlys’ feelings that the suspense of the film’s early, India-set scenes soon dissipates, as if wrapped in the wet-suited Saroo’s preternatural poise. In contrast, his dissolute adopted brother, Mantosh (Divian Ladwa), erupts in startling rages and fits, underlining the film’s abrupt loss of momentum; against the organic force of young Saroo’s displacement, the reliance on such fireworks to stoke the family’s simmering trauma is clumsy, if not exactly cheap.

By the time Lion swings back in the direction of more commanding sentiments, culminating in Sue’s affectingly frank description of an adoptive mother’s pain, the film appears smaller, more formulaic, than the sum of its parts, though Saroo’s return to India is certainly rousing. Despite underusing both Kidman and Rooney Mara, as Saroo’s girlfriend, Davis’s direction at least gestures at a fuller understanding of transnational identities. Lion crafts, through a series of fitful glimpses, a sense of the correspondences between its two settings, and not simply the juxtapositions, and as a spot-lit bridge in Melbourne becomes a predawn analogue in Saroo’s birthplace, or as Tasmanian dunes melt into Indian hills, it’s hard not to credit the attempt, if only partly successful, to see Saroo as a man in two places at once.

“We weren’t blank pages, were we?” Saroo says of Mantosh and himself, and the film, preferring a palette of ochres and mahoganies to the bombastic color of Danny Boyle’s Slumdog Millionaire, is admirably attuned to the nuance of both/and, rather than the ease of either/or. Lion’s faults of structure and pacing might limit its power, but in stretches it still roars.

Review: The Eyes of My Mother