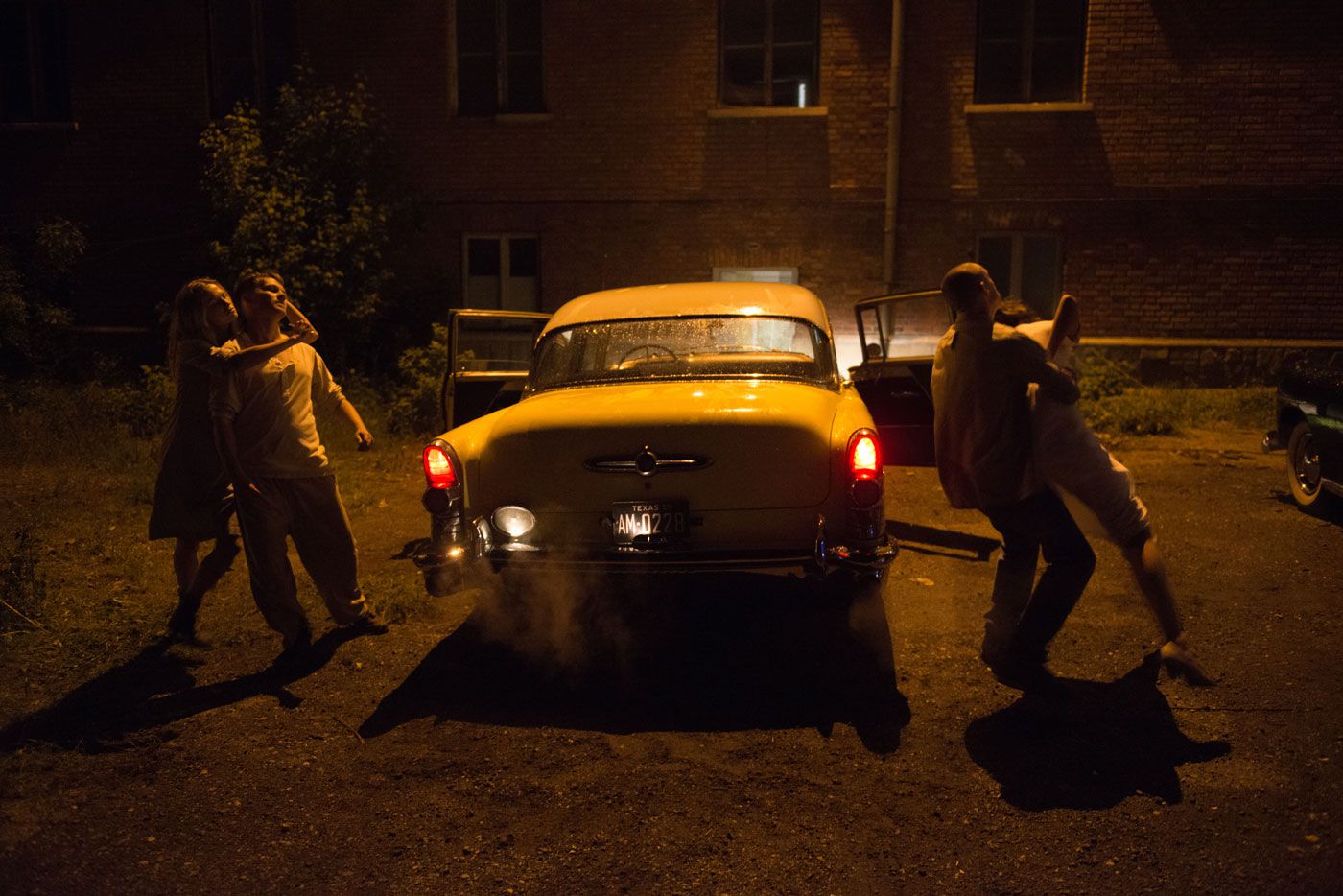 Awful even by the lax standards of Texas Chainsaw Massacre cash-ins, Leatherface offers a stale and self-consciously disgusting smorgasbord of redneck clichés. There are greasy white tank tops and splotchy facial hair, as well as Southern accents so broad they’re actively oppressive. Almost every character is a sociopath as defined by the last 40 years of slasher movies: obsessed with their mothers, under- or over-sexed, prone to drooling, gripped by a flair for rape and murder, and reductively defined by a physical deformity. And the setting is no less obvious, as the 1960s Texan landscape abounds in cars, cafés, asylums, and dilapidated farmhouses that announce their period specifications in all caps. These affectations are tied together with washed-out cinematography that’s dominated by a hue that might be called “shit-water brown,” with splashes of blood-red for lurid variety.

This desperate-to-be-edgy aesthetic—already utilized by several Texas Chainsaw Massacre sequels and remakes—predictably misses the point of Tobe Hooper’s 1974 classic. Hooper’s The Texas Chainsaw Massacre appeared to be found, suggesting that the darkest corners of America resided just out of sight in our peripheral vision. Near the end of Leatherface, the camera lingers on all the bones that decorate a room inside the Sawyer clan’s home; the scene is meant to recall a similar one from the original film, but the contrast between old and new is pitiful, as the skeletons in a Pirates of the Caribbean sequel have more verisimilitude than Leatherface’s corpse décor. Similarly, the actors in Hooper’s film appeared to be people who were caught on camera, while Leatherface’s cast is composed of the usual anonymous babes, scruffy bad boys, and slumming character actors who often litter the horror genre.

Leatherface’s pointless narrative continues to mine contemporary cinema’s obsession with providing backstories to characters who were once resonantly inexplicable, suggesting a merging of Rob Zombie’s The Devil’s Rejects with the filmmaker’s 2007 cover of Halloween. Leatherface, who once wore a mask fashioned out of human skin and served as an errand boy for the Sawyer clan, which was notably unsympathetic to America’s curdling counterculture movement, is now a troubled teen in a Texas asylum. Leatherface’s aunt, Verna Sawyer (Lili Taylor), is a diseased matriarch determined to have her boy back so as to teach him the finer arts of smashing people’s heads with sledgehammers and feeding their corpses to carnivorous bores. We’re not told who Leatherface specifically is until the plot’s climax, as the film encourages a guessing game on the part of the audience. The future hunter of cannibal BBQ fodder could be any one of a handful of escaped mental patients, and you can bet that he’s the one you’re encouraged to least suspect.

Leatherface is directed by Alexandre Bustillo and Julien Maury, who collaborated on Inside, a beautiful and disturbing French horror film that channels a bit of The Texas Chainsaw Massacre’s distinctively invasive energy. But the filmmakers’ anonymous work here could’ve been overseen by any hipster looking to make a mark at Platinum Dunes. Bustillo and Maury’s sole accomplishment in Leatherface is to unintentionally make one long for the artistry of Rob Zombie’s cinema, which invests its own Hooper-infused hillbilly vaudeville with a verve and sense of humor and obsession that’s direly missing from this film. Forget Zombie and especially Hooper, as Leatherface inspires longing for the comparatively classical artistry of Marcus Nispel.

Review: One of Us