When a great director goes wrong, they usually don’t go wrong in a small way; they go spectacularly wrong, ambitiously wrong, prodigiously wrong. In the case of Leo McCarey, his own innate talent for spontaneous, behavioral observation remained constant after 1940, but his intellect, taste and judgment flew off to cloud-cuckoo land. He left us with some of the most maudit of film maudit, movies that only the most hard-boiled auteurist could argue are successful in their totality, and the recent TCM airing of McCarey’s notorious, riveting anti-Communist My Son John (1952) opened up a whole slew of questions for me, especially in how it seems to directly relate to parts of his unquestionably major films, like The Awful Truth and Make Way for Tomorrow (both 1937). The movie hadn’t been seen on television since 1970, and it remains a hot potato, not only because of its impossible-to-follow right wing politics, but because of its often uncomfortable stylistic choices.

I recently watched two McCarey problem pictures from the forties, Once Upon a Honeymoon (1942) and Good Sam (1948), both of which gave me an idea of what I’d be dealing with when it came to My Son John. McCarey was known for improvising a lot of his movies on the set; he’d go over to play some piano for a while, dream up scenes and then give them to the actors. This had a salutary effect on Cary Grant and Irene Dunne in The Awful Truth, two complementary players wrapped in their own bubbly world of romantic comedy, but Honeymoon falters in its first labored, tasteless scenes between Grant and Ginger Rogers, who plays a former Miss Flatbush gold-digging a Nazi official (Walter Slezak). The stars don’t seem to know what they’re doing for a while, but then comes an extraordinary scene where they get drunk together at a restaurant; McCarey keeps his camera on them steadily as Rogers unexpectedly observes that “Schopenhauer is too cynical,” and gets a bit teary while Grant burrows deeper and deeper into lyrical tipsiness. Suddenly, two unlikely characters and mismatched actors become real and believable, and there’s no way that Rogers and Grant could have hit such exalted emotions without McCarey’s willingness to experiment and his Irish sense that alcohol can sometimes unlock our most fruitful feelings (see especially the wondrous drunk scene between Paul Newman and Joan Collins in his also-problematic Rally Round the Flag, Boys! {1958}). 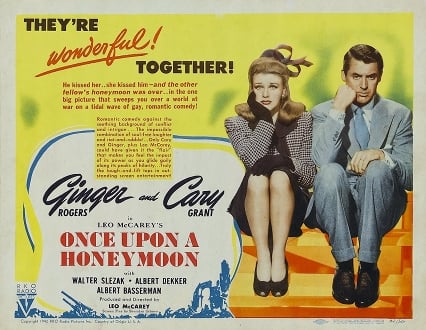 The Rogers/Grant connection remains strong throughout the middle of Honeymoon, even when the film’s wartime political angle gets dicey. Our stars are sent to a concentration camp where the Jewish captives sing what sound like black spirituals, and then they get out all too-easily. The film wanders; Rogers and a male character do vaudeville accents at each other for a very long time, Grant does a dry run for his jealousy in Notorious (1946) when Rogers is sent back to Slezak to learn some Nazi secrets, and in the last sequence on a boat, McCarey lurches into the mistimed, wacky comedy territory of the first scenes. My guess is that when McCarey tried to think over a huge issue like Nazism, all of his most valuable instincts as a director of actors got blurred, as if he had caught Frank Capra-itis, yet Honeymoon is worth muddling through to get to its actorly moments of clarity and connection. The same can be said, but to a much lesser extent, for the uncommonly flabby, poorly thought-out Good Sam, which gets bogged down in its own self-conscious theme of altruism. In that movie, McCarey’s hung-over, disinterested camera watches and watches Gary Cooper and Ann Sheridan in would-be comic domestic scenes that go on so long that they seem to be meant to be painfully unfunny.

Robin Wood has written about how McCarey loves romantic couples but seems to loathe families, and this point is borne out most harrowingly in My Son John, the skeleton film in his closet, and one of the most personally revealing. The first image shows us wintry trees on a depressed-looking American suburban street. The camera slowly pans up a house, making it seem both a fortress and a prison. Pa Dean Jagger and Ma Helen Hayes go to church and then send their two football-playing sons off to the Korean War, but not before one of them jokingly calls Hayes “sweater girl,” a loaded endearment if ever there was one. It’s established from the start that this family is too stiflingly close, and to get that effect, McCarey seems to encourage Hayes’s grotesquely overblown, theatrical acting style, with all its weird, wind-up toy pirouettes. There are dissolves to more wintry trees and scattered, dirty pockets of snow on the ground, so that McCarey gets almost a Bergman-esque feel before definitively trapping us in his All-American Home.

When the third son, family intellectual Robert Walker, comes home for a visit, he looks askance as Jagger dimly wonders about how the Indians felt when the Americans took their land. Later, Hayes will wear an Indian headdress as she does her laundry because she’s been playing with the kids in the neighborhood; this strand of the film isn’t developed past this point, but it nevertheless sets up the relentless, obscure criticism of America that runs all the way through the first hour and a half. Jagger is seen, not just by Walker but by McCarey, as a loud-mouthed buffoon, tonelessly and confusedly singing a patriotic song, and Hayes is a guilt-tripping, menopausal smotherer, aware of her own limitations and her vague, wasted dreams, but frantically clinging to self-deception and baby-ish attitudes. There are several long takes between Walker and Hayes that feature the kind of extravagant hemming and hawing that McCarey favored for his romantic couples in the ’30s; at uncanny moments, Hayes sounds exactly like Irene Dunne’s Lucy Warriner in The Awful Truth and Walker takes up the Grant role with her. These two are the embattled romantic couple in this McCarey film, and it’s obvious that Walker’s character would have to be gay with a mother like Hayes, even if he hadn’t carried over some of the effete mannerisms from his role in Hitchcock’s Strangers on a Train (1951); he even refers to the “silver cord” between them that needs to be cut, while she seems to get lost staring at his mouth. His John was too long in that house with her, reading his books and trying to avoid her lovelorn advances, while his athletic, Hitler-youth-blond brothers had their escape on the football field and now the killing field of war.

In the first part of My Son John, any sensible person would have to identify with Walker, who hilariously insults Father Frank McHugh over his tedious sermon at church, deflects Jagger’s most flagrantly stupid remarks with a heroically tolerant grin, and even tries to keep a poker face when Hayes remembers an old lullaby she used to sing to him as a child, bouncing an imaginary baby on her knee until the movement starts to look downright masturbatory (“Diddle, diddle dumpling, my son John!” she sings, and it’s horribly clear that she does want to actually diddle her little grown-up dumpling). The film seems to be saying that these people and their milieu would turn anyone into a Communist; anything to destroy this nuclear family hothouse! And even when the movie has teacher Jagger whine about not being able to mention God in the classroom, a now familiar right wing complaint, McCarey undercuts it by having Hayes look at him skeptically, if lovingly. This is followed by Jagger taking an expert pratfall down the stairs; hearing the damage done to her staircase, Hayes dryly remarks that Jagger is doing more to destroy the American home than the Commies. Thus McCarey’s pivotal early training as the overall supervisor of Laurel and Hardy’s silent shorts comes to the rescue for his audience, even as it sabotages his anti-Communist purpose.

Alas, in the last half hour, McCarey betrays his best instincts with his most shameful convictions, denying his film’s complications in order to get across his asinine “point.” McCarey’s Catholicism asserts itself, too, and it’s the most offensive “do what I say,” clutch-your-rosary kind, far removed from the true spirituality of Rossellini, Dreyer or Hitchcock. Walker died before the film was finished, so McCarey has to use awkwardly inserted outtakes from Strangers on a Train and resorts to an audio recording for Walker’s final repudiation of Communism to an auditorium full of blank-faced graduating students. In his book Romantic Comedy, James Harvey gets to the root of the film’s two-faced nature and its tragic dilemma: “…we are all helpless not to betray these parents—the ones who gave us a make-believe America which we may never get over yearning for but which we betray repeatedly and necessarily with every act of grown-up perception.” Hayes praises the indefensible Jagger for the very thing that makes him dangerous, his aggressive ignorance, so that McCarey actually finds himself endorsing stupidity because it better allows you to “think with your heart.” Only the upcoming Criterion DVD release of McCarey’s masterpiece, Make Way For Tomorrow, can possibly balance the picture of talent gone astray that began with Honeymoon and Good Sam and ended so ignominiously, if fascinatingly, with My Son John.