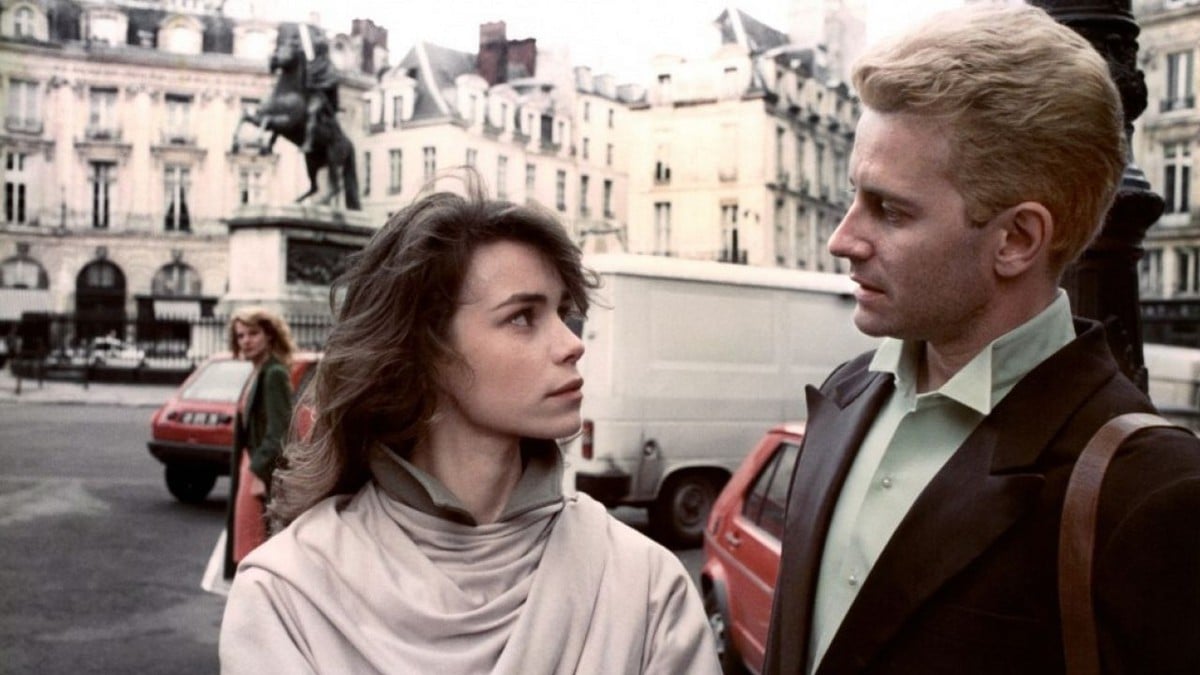 A gorgeous young woman living in Paris avoids contact with her drunken train wreck of a father and offers the bare minimum of help to her needy, depressed mother. Ethel (Valérie Kaprisky) carves out a modest life for herself working at a studio for a taciturn photographer, doing nude interpretive dances that are scary, not sexy. But one gets the distinct impression she’s looking for more out of life, and seemingly on a whim she auditions for a lead role in a costume drama based on Dostoyevsky’s The Possessed. She meets a director, Lucas Kessling (Francis Huster), who is attracted to her innate star talent, but he flies into tirades of anger when he attempts shooting scenes with her and discovering only pretty-girl affectations.

La Femme Publique is set up as the story of a woman’s journey of self-discovery, but since the director is Andrzej Zulawski, that trip involves sequences where spontaneous brawls erupt in cafes and the losers are thrown out of plate-glass windows, bombs go off in the streets, the director and his starlet consummate their love after narrowly escaping wafts of tear gas and rioting in the streets, and frustration is expressed through smashing plates against the wall, food fights, and chewing on broken glass. Melodrama isn’t simply raised voices in a Zulawski film, but also a life-or-death struggle of passion where acting isn’t simply about delivering a performance in a film (or within the film-within-a-film) but setting off rapturous elation and mad agony to the hilt. In other words, Zulawski buys into the idea that we’re living inside plastic bubbles and the best thing to do is place boundless limits on self-expression.

Femme Publique is a love letter to actors, who Zulawski vividly admires for charging fearlessly into his material. While Kaprisky the actress strips naked for the interpretive dance numbers, her character is unable to be emotionally naked in front of the men, and Zulawski uses his own camera to get right in her face, having her repeat texts over and over again, breaking into tremors and tears, or closing herself off; when Kessling has her undress for a sex scene, she leaves on a pair of sunglasses as a protective shield against the 30 or 40 members of the cast and crew hanging out in the room.

Though Kessling can be interpreted as a stand-in for Zulawski, Femme Publique is not his autobiography in the same way his previous film Possession was. That horror parable offered a love triangle between a husband, his cheating wife, and a tentacle monster, and was inspired by Zulawski’s shattering real-life divorce. Having gotten that poisonous masterpiece out of his system, he switches focus in Femme Publique, telling someone else’s story. Based on a novel by co-screenwriter Dominique Garnier, the material is inspired by her life as a struggling artist who, indeed, posed nude for photographers as a way of making ends meet and sought refuge in art projects as a means of self-expression and figuring out who she was.

While you can’t say Zulawski’s getting in touch with his feminine side here (since the woman is objectified, ogled, and fondled by almost every male character in the picture at some point), there’s definitely a shift in focus. There’s a reversal of fortune that happens as Ethel gains in life experience throughout the film, to the point where the male characters seem diminished by her newly discovered sense of self. (One of the central male figures promptly slings up a noose and hangs himself after seeing her ability to command the screen in The Possessed.) For a director whose attitude toward women seemed confused and even borderline hostile in his earlier films, this is his first woman’s picture where the heroine clearly comes out on top.

The camera in Zulawski’s films careens wildly into scenes, pushing forward into the sets and actively pursuing the actors. Most of Femme Publique is shot from daring low angles that render Kaprisky a kind of totemic goddess or a lost soul amid dizzying and cavernous European buildings, spiral staircases, and dilapidated columns. But this is also his most sumptuous film in terms of lighting, courtesy of celebrated director of photography Sacha Vierny.

The cityscape of Paris is luminescent; with rays of sunlight peeking through windows and street fountains glistening, and the bodies of the actors have a similar ecstatic glow, all by virtue of Vierny’s sensitivity. In a way, this genius collaborator of international filmmakers such as Alain Resnais, Raúl Ruiz, and Peter Greenaway brings warmth into a Zulawski picture, and is a fitting visual counterpoint to Femme Publique’s themes of idealism. “I don’t respect women, I don’t respect men,” Zulawski proclaims during a tense moment in his audio commentary for Possession, “but I understand them—I hope.” Vierny’s camera clearly adores the actors, supports them, and even reveres them.

That romanticism is contrasted by Zulawski’s belief in love and hate as powerful, primal forces. Often accused of whipping his actors into states of frenzy, barking at each other like rabid dogs, Femme Publique is actually a movie that rushes along with charged enthusiasm. The film-within-a-film is clearly made in the Zulawski style, with actors bursting into fits or controlling the space with hyper-activity, and when Ethel isn’t playing her role to the hilt, the director not only accuses her of potentially ruining his film, but also destroying her own life. His solution to this problem is either a plot digression about political assassination (he introduces her to a Czech terrorist played by Lambert Wilson) or an elaborate stunt where Ethel is forced to actually take bold, caustic action in her life—not to push herself to a breaking point, but to break through and actually take part in some kind of cause.

While Zulawski never advocates violence or terrorism as a tool for self-expression, it’s clear he believes it informs passion and personal identity. (He despises apathy at the same time as hating mob violence.) He himself was born with bombs dropped on his city, and political struggles in Communist Poland, where radical artists were routinely banned. It’s easy to see why he’d admire Ethel for finding a way of surviving, learning, and expressing herself. It’s not simply Madonna-style provocation, but informed anger. Femme Publique equates political courage with action, and argues there’s no line to be drawn between living life to the fullest and acting a role to the fullest.