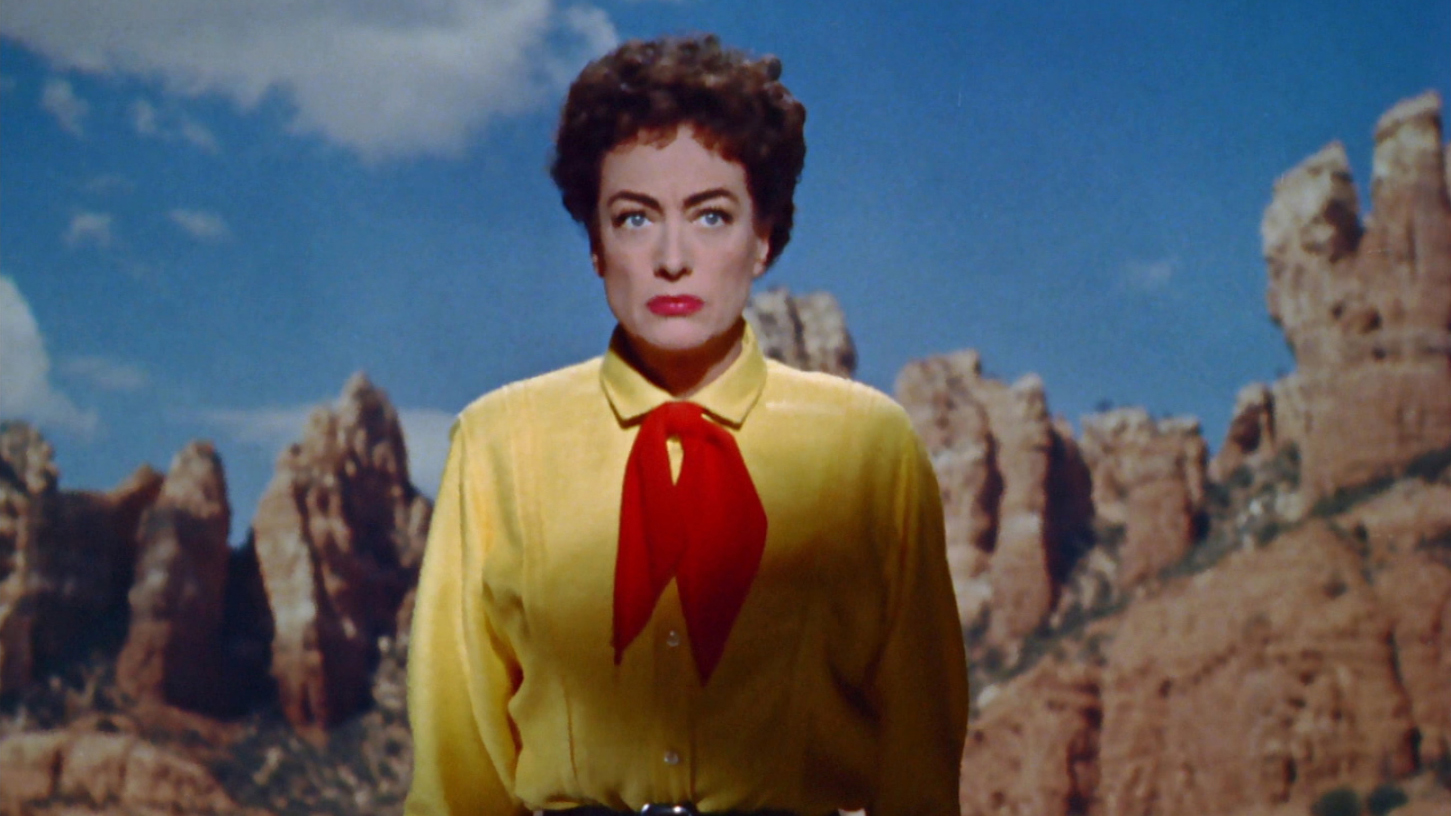 François Truffaut once wrote that Johnny Guitar “is the Beauty and the Beast of westerns, a western dream,” but I prefer to think of it as a few degrees closer to Orpheus: still a dream, but at heart more myth than fairy tale. You may recall that Orpheus was an ancient Greek musician who attempted to liberate his wife, Eurydice, from eternal damnation, armed only with a lyre and a keen ear for melody, and who was welcome to return from the underworld, wife in tow, on the condition that he never look at her again (spoiler: he snuck a peek and failed). And you may recall, too, that a crucial early sequence in Johnny Guitar finds the titular musician (Sterling Hayden) interrupting a showdown between former flame Vienna (Joan Crawford) and a posse of seething lawmen and townspeople with nothing more than his six-string namesake and an Orphic tune. The twist here is that nobody can look at anybody: Desire destroys everyone and everything, each glance shared a chance for death. Not even Hades was so cruel.

It’s been noted many times before that, while it’s conspicuously named for him, Johnny Guitar himself doesn’t exactly qualify as the protagonist or even lead character of the film; that honor goes to Crawford’s Vienna, the fierce entrepreneur (and sometime gunslinger) whose newly established saloon stands to become a veritable goldmine when the impending construction of a railroad promises to snake through her otherwise vacant lot. But the film’s most significant character, on whom all of its action and drama essentially hinges, is the one who most intensely (and eventually violently) opposes Vienna’s prescient coup, a local rancher and spirited spitfire named Emma, embodied with a frequently terrifying ferocity by Mercedes McCambridge.

Never has such fear and self-loathing been so palpably materialized in a look, a contempt so burning and so real it can barely be contained within a stare. The film’s power is drawn from and summarized by this single image: Emma quivering from the shock of her own confusion and hatred, fear twisting barked words into commands and orders, her slight and wrought figure somehow seeming to tower over everything. Emma is the cinema’s most frightening villain precisely because she isn’t evil—rather, she’s overcome by a confusion and a fear shared by all of us, a fear of the other and of the self that manifests itself without mercy as pure, uncontrollable hate.

We can talk about a lot of things here, because there’s so much smuggled in just beneath the surface: the sexual repression (Emma hates herself for being attracted to an outlaw named the Dancin’ Kid, with whom it’s implied Vienna sometimes shares her bed, and intends to see the Kid hanged for causing her to feel that way); the Freudian (roughly, that westerns are about guns—and guns, naturally, are the ultimate phallic symbols); more interestingly, the Lacanian (where the allegedly forthcoming but importantly as-yet-nonexistent “railroad” and payday becomes Vienna’s—and the film’s—objet petit a, the promised endgame, and, finally, that mysterious and perhaps unattainable object of desire); and, of course, all the feminism (Vienna as proto-feminist archetype, usually, but the “ostensibly masculine female protagonist subverts gender stereotypes” reading has always felt a bit too on the nose, subtextually speaking, and more than a little problematic).

I’ve always been fondest of the clearest, most obviously telegraphed, reading of Johnny Guitar as a critique of McCarthyism and the Hollywood blacklist. In a sense, the subject hasn’t retained much of the cultural cachet with which it was once loaded; films like A King in New York, only recently reclaimed after decades of unfair dismissal, don’t register as readily as scathing or radically divorced from their original political context. But it’s important to remember that for many years, taking any kind of stand on this issue practically guaranteed indefinite exclusion from the industry; articulating a vehemently anti-blacklist polemic within a Hollywood film, even with great tact and subtlety, was tantamount to political suicide (even Chaplin, remember, could only overtly decry McCarthy from the safe distance of exile).

It’s common knowledge now that the film’s credited screenwriter, Philip Yordan, was a front for Bed Maddow, who had been blacklisted and barred from working in Hollywood. The anger is warranted and perfectly evident in the film. The outline of the narrative, of course, draws parallels to the blacklist’s exclusionary sensibility (a band of black-clad townsfolk demand the exile and, finally, the execution of innocent people without reason, a witch hunt guided by self-evident madness), which might have been damning (and risky) enough. But Johnny Guitar’s key scene goes deeper: Emma’s gang, dressed in funeral attire, arrive at Vienna’s saloon a day after giving her a 24-hour ultimatum, demanding that she tell them where to find the Dancin’ Kid, whom they intend to hang for robbery. Vienna, playing piano alone in a flowing white gown, flatly refuses, reprimanding them for their senselessness.

Suddenly, a boot pokes out from beneath a table; Vienna has been hiding Turkey, the youngest member of the Kid’s posse, badly injured from a fall from a horse. Emma’s gang seizes Turkey and threatens to hang him on the spot if he doesn’t confess to his crimes and incriminate Vienna in the process. Turkey, scared for his life, turns to Vienna in desperation, his cry resounding: “What do I do? I don’t wanna die!” What’s extraordinary about this scene isn’t simply the deft, surprisingly fair-minded way it manages to both condemn the accusers and mercifully exonerate those who felt compelled to give others up—though the pity it shows Turkey is a rare act of compassion and forgiveness. Rather, it’s the urgent, visceral depiction of entrapment that’s truly compelling, the way it manages to humanize the drama and politics of McCarthyism while transforming it into something almost surreal.

That’s part of the appeal of Johnny Guitar: its lurid, Trucolor-soaked veneer seems tailor-made for retroactive pomo delineation, its rich surfaces ever-ready to be mined for meaning. It’s a film that’s many things to many people, from camp spectacular to revisionist genre epic, and nearly every reading seems viable. Was it Nicholas Ray’s intention to subvert every expectation, to undermine the conventions of the most American of genres? The mythology of the western, finally, is more important to this country’s dominant ideology than any Greek mythology ever could be, the poetry of Orpheus or otherwise—maybe grappling with the former and emerging with something new, and something truly challenging, is the most American of feats. It’s not just “a western dream”; it’s the American one.