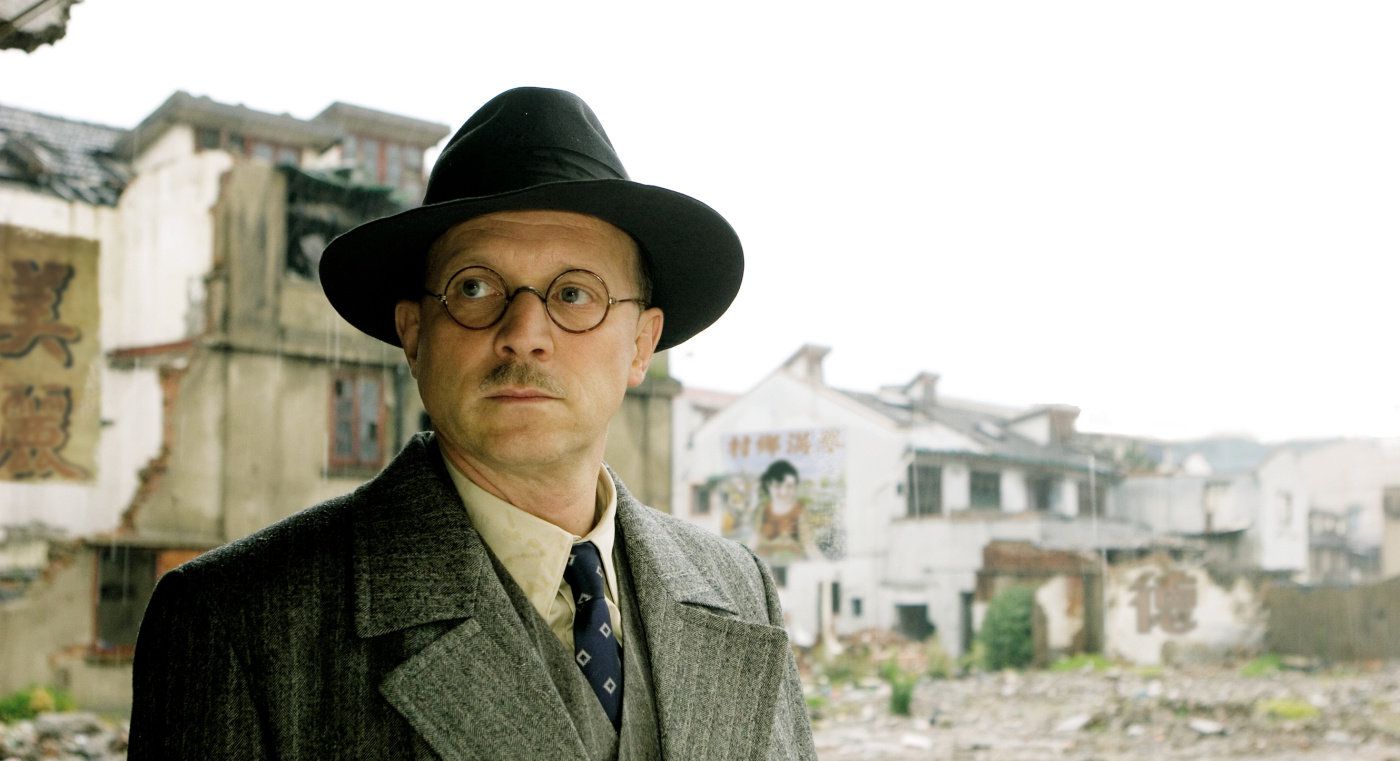 Bald, diabetic, perpetually uncertain in his role as hero, John Rabe is no glamorous bon vivant like Oskar Schindler, but like his fellow Nazi industrialist, the eponymous lead character of Florian Gallenberger’s film about the Rape of Nanking gets a similarly sentimentalized on-screen treatment, portrayed as an initially reluctant wartime do-gooder who saves from extermination a smattering of faceless peasantry who are no less sentimentalized through their victimhood. Call it the Schindler syndrome, or the trope of the good Nazi. But if, in Steven Spielberg’s film, the titular hero had Ben Kingsley’s Jewish accountant as his indispensible assistant, the real-life figure Rabe (Ulrich Tukur) has instead the American doctor Robert Wilson (Steve Buscemi), an anti-Nazi humanitarian who keeps up a running monologue mirroring the audience’s potential doubts as to the industrialist’s character, until the latter’s kind-heartedness is definitively established. The monologue then dropped, the two team up with a bunch of other good Germans and British to form a whites-only committee designed to establish a safe zone in the center of Nanking as the Japanese army brutally invades the city. In Gallenberger’s film, the Chinese are allowed onscreen as victims only.

Of course, victims they were, in a notoriously brutal campaign which may be on its way to becoming the cinematic atrocity du jour, and if Gallenberger leans toward the sentimental, he can also be brutal—brutality being the flip side of sentimentality—in ways that raise questions about the representation of violent historical event. (The film shares these questions with its contemporary Nanking-themed film, Lu Chaun’s controversial City of Life and Death, whose U.S. distribution was pulled under pressure from the Chinese government—something which critic Andrew Chan discusses in his incisive consideration of that film). Gallenberger has no problem staging thrilling high-priced set pieces (witness an early sequence where the Japanese threaten to bomb the city, the tension heightened as the biplanes fly directly at the camera, until Rabe unfurls a giant Nazi flag to signify his alliance with the would-be attackers), but the effect of the film’s magnifying of its violent stagings becomes increasingly questionable. Clearly the depiction of the mass executions, tortures, and rapes shouldn’t be pleasant, especially given the film’s obvious commitment to reviving awareness of the forgotten horrors, but I don’t think that art-directed shockers, such as a perfectly arranged row of decapitated heads resting in front of a massive tangle of bodies (even if the art direction belongs as much to the historical Japanese as to the film’s director), potentially titillating tracking shots (a forced strip search which occasions Gallenberger’s camera to wander past the nude flesh of several dozen nubile girls), or bits of contrived drama (as when a rape is prevented by a child who happens to stumble upon a stray gun) do justice to the victims of the historical atrocity so much as use unimaginative modes of filmic representation to present acts of inhumanity as the stuff of standard cinematic entertainment.

But for all the blood, guts, and sexual violence suffered by the natives, this is really John Rabe’s story. And Robert Wilson’s. They’re two of the selfless white men who, along with one woman, fought to save the Chinese. To ensure that we realize Rabe’s essential nobility even before his part in the Nanking atrocities, Gallenberger makes quite clear that, while his hero may be a Nazi industrialist, Rabe’s principal project while in Nanking was in constructing a potentially beneficial dam, while, the film taking place in December 1937, he’s unaware of Hitler’s darker motives, even his animosity toward Jews, and naïvely writes to the Fuhrer, certain that he’ll intercede once he hears of Japan’s brutal actions. For his part, Wilson is morally unimpeachable from the start. Of course, things aren’t quite as simple as “do-gooders versus evil Japanese,” and in addition to effectively guiding his viewer through a good deal of complex historical material, Gallenberger disturbs the simplicity of his moral schema through several complicating touches. Rabe, for example, debates the wisdom of hiding several hundred prisoners to prevent their execution with the director (Anne Consigny) of the girl’s college, even as the act may compromise their entire project, while one Japanese Major quietly objects to the awful exploits he’s asked to carry out, expiating his guilt by secretly imparting information to Rabe’s people.

For the most part, though, the film’s story is one of heroism in the face of potentially deadly circumstances. In itself, this is not necessarily an objectionable premise for a film and my point is not to suggest that Rabe and his compatriots weren’t heroic, but when the film ends with the Chinese people cheering that man’s final advance, while his colleagues toast him with a round of “for he’s a jolly good fellow,” it’s easy to lose sight of the fact that as many Chinese lost their lives in Nanking as were saved, while Rabe was free to sail comfortably home—even if his future remained uncertain and his heroism wasn’t always recognized. There are, as always, a nearly infinite number of possible lines of inquiry to pursue when crafting a film about a historical event and Rabe as a real-life figure certainly deserves his recognition. But a movie that sentimentalizes that figure’s heroism while presenting the Chinese as ciphers defined only through their victimhood is probably not the strategy likely to yield the most salutary cinematic results.