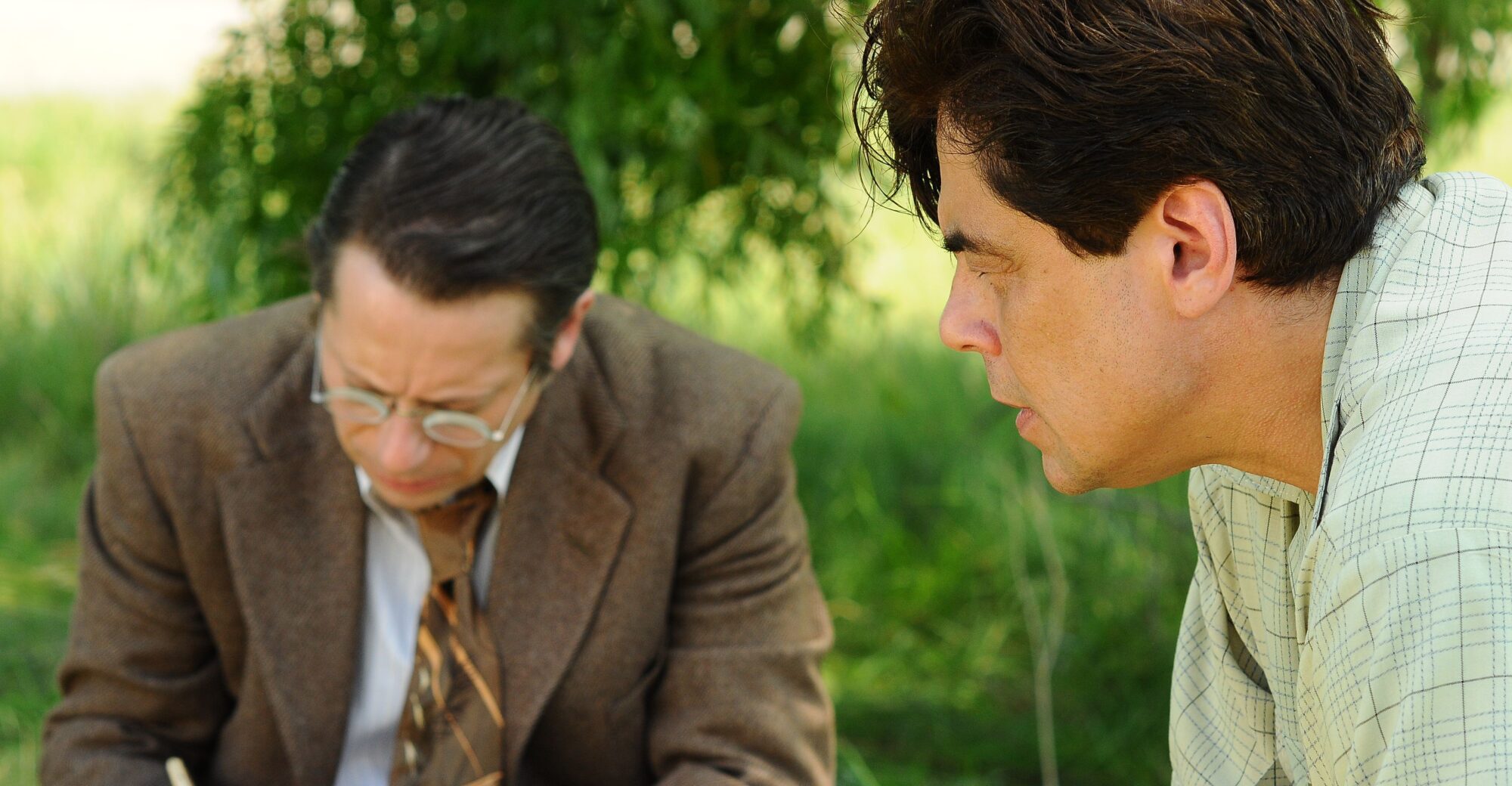 The U.S. is home to nearly 600 different indigenous peoples, each of them possessing a distinctive culture. Yet rather than approach their traditions with anything resembling complexity, American perception stands largely on reductive stereotypes, with all these groups lumped into an amorphous blob defined by blanket generalizations and some wispy notions of mystical serenity. It’s enough to drive any Native American a little crazy, so you can understand the dilemma of Jimmy Picard (Benicio del Toro), a Blackfoot Indian who, aside from enduring the slings and arrows of an overtly racist late-‘40s America, is also a WWII vet recovering from a serious head injury, not to mention a laundry list of basic psychological complexes. These get him sent off to the Menninger Clinic in Topeka, Kansas, where a puzzled staff of doctors eventually places him in analysis with a daffy anthropologist known for his unorthodox methods.

Jimmy’s transfer from his Montana ranch to the narrow confines of the infirmary functions as a reprise of the Native American crisis in miniature, sacrificing wide open fields for an existence under glass. At the clinic, he’s pushed into the psych ward after it’s determined that his panic attacks have no physical explanation. Then, despite being further diagnosed as mentally sound, he’s kept there with the only other Native American patient, a catatonic incapable of anything but puffing on a cigarette. The staff seems to have his best interests at heart, but remain committed to the inane idea that they don’t know how to treat Native Americans, working off the presumption that persons like Jimmy operate off a different intellectual baseline. This facilitates sending for Georges Devereux (Mathieu Amalric), a New York-based Frenchman who’s spent two studying the Mojave, thus making him the best candidate to diagnose Jimmy’s mental state.

Jimmy P.: Psychotherapy of a Plains Indian unfolds through their sessions, with Devereux pressing the taciturn Jimmy for more and more information. It’s gradually revealed that his episodes stem less from head trauma than a gradual accumulation of psychological issues, which after years of repression have started manifesting physically. Devereux teaches Jimmy to alleviate this pressure via a process of systematic unburdening, gradually revealing his past through the cathartic self-focus of talk therapy. The burden of the narrative rests on the restorative nature of this procedure, and while there’s never any melodrama affixed to it, the beats are rote and expected, as is the conversation attached to them. This means that Arnaud Desplechin’s film grows increasingly dull as it beats a cautious path toward Jimmy’s recovery, resorting to Psych 101 imagery and monotonous dream sequences, all of which lead to the usual breakthroughs (the man’s unresolved guilt over childhood mishaps, the shock of seeing his mother with a man, etc.). This sense of heaviness is furthered by del Toro’s quietly showy performance, all halting speech and overly deliberate gestures, which is fleshed out but still clumsily rendered.

Yet there are some interesting, if not completely legible, things going on beneath the film’s text, which seem to subvert the seemingly straightforward presentation of Jimmy’s healing process. Key is the fact that the talking cure, by which Jimmy has his issues labeled and in many ways simplified, is akin to the progression by which foreign cultures pass into the American melting pot. It’s something Devereux understands, as a Romanian Jew who, through a combination of personal choice and historical trauma, now no longer identifies as Romanian or Jewish. More than anything, Devereux is teaching Jimmy to adapt, one emigrant to another, taking a supposed savage and making him fit for modern society, in a manner that puts a mid-century spin on the familiar particulars of this process.

This, in many ways, is how America works; the Faustian bargain for entering the mainstream is having the specifics of your culture and your personality whitewashed down to easily understood stereotypes. Jimmy is reduced first to a stock Indian, then a head case, and finally a cured man, with none of these labels ever fully explaining his elaborate set of issues. Meanwhile, Devereux’s motives never seem entirely pure, since he remains as fixated on anthropological puzzle-solving as healing, working off the hope that both things can be achieved simultaneously. His treatment allows Jimmy a newfound level of self-awareness, but he leaves the film less cured than transformed, equipped with medical names for his problems and a meager sense of personal understanding.

In this context, the boilerplate nature of Jimmy’s diagnosed traumas is important, since his therapy simultaneously makes him more and less human, justifying his existence by allowing him the opportunity to vent his feelings, while generalizing the specific tenor of his experiences. The parts of the movie that acknowledge these truths feel satisfying complex, a deeper rendering of the naïve way in which psychology is usually depicted in movies. Yet too often Jimmy P. seems to struggle in making its interesting ideas apparent, leaving them stranded beneath the dry surface of an otherwise ordinary procedural.

Review: My Name Is Hmmm…